0:06Skip to 0 minutes and 6 secondsSports and fitness plays a major part of our lives and has been greatly influenced by developments in Chemistry. When participating in our favourite sports, we regularly interact with a range of modern synthetic materials. In sports that use specialised equipment, such as golf, the impact of developments in Chemistry has been most obvious - over 100 years ago hickory wood shafts were used, this was followed by use of steel and aluminium, whereas today, composite fibres or polymers, including Kevlar, are typically used to propel golf balls faster and with greater accuracy.

0:41Skip to 0 minutes and 41 secondsBut it is not just golf, nearly every sport relies on modern materials to produce high-performance equipment - whether it be tennis, football, cricket, canoeing, or skiing, polymers, composites and other advanced materials are commonly used - high-performance describes materials that are stronger, more resilient and lighter-weight than traditional materials, including wood and steel. When watching sport it is of course the athlete's talent that inspires and enthuses us - athletes are faster and stronger than ever - and Chemistry plays a key role in their training, competition and recovery. Using the right equipment and choosing the appropriate sports drink, could mean the difference between winning a gold or a silver medal.

1:24Skip to 1 minute and 24 secondsAlthough not all athletes can win medals, from time to time, they all suffer from injuries - it is estimated that around 65% of runners are injured in an average year. To help recover from a fall, twist or sprain, cold sprays, antiseptics, anaesthetics, anti-inflammatory medicines, not to mention plasters, bandages and sleeves, have an important part to play. Our tour of Chemistry in Sports looks at landmark developments in sports equipment, medicines and nutrition. This includes improvements in safety, such as protective clothing made from polyethylene and polycarbonates. We will also look at the more controversial use of performance-enhancing medicines, including stimulants, diuretics and most famously of all, anabolic steroids.

2:11Skip to 2 minutes and 11 secondsThis topic helps to showcase the range of career opportunities available to chemists - many of our York Chemistry graduates go on to be polymer chemists, formulation chemists, organic chemists and materials scientists, and some go on to be analytical chemists - it is the advances in analytical chemistry that ensures modern techniques including gas chromatography-mass spectrometry can detect minute amounts of banned drugs, in an athlete's blood or urine.

Chemistry in sport including stadiums

Welcome back to the course and our fourth and final week of study, which explores chemistry in sport!

Modern construction materials have transformed the design and performance of sports venues, whether it be a stadium, a velodrome or an aquatics centre. Venues can be built more quickly, stand the test of time better, and have lower energy usage. For example, the setting time of concrete, can be formulated with additives – it can be set more quickly to reduce the building time, or more slowly if it needs to stay liquid for longer to allow it to be pumped further. Admixtures are specially formulated products that are added in small amounts to concrete, mortar or grout during the mixing process to change the concrete properties in the plastic and/or hardened state. These admixtures were used, for example, to speed up the construction of the Beijing olympic village, tennis centre and aquatics centre.

Chemistry also provides the paints and coatings that protect surfaces from the weather and other damage, and provide a decorative finish. Many modern coatings are ‘greener’ than traditional paints, and can protect just as well – if not better. Traditional paints and derived from fossil-fuels and release large amounts of volatile organic compounds (VOCs), as the paint dries and cures, which has environmental impacts. For example, for Bayer Leverkusen’s football stadium in Germany, poly(aspartic acid) coatings were used to protect the metal girders from corrosion. The coatings dry more quickly and thicker layers can be applied, so fewer coats are needed, and as there is less solvent to be evaporated, they are more environmentally friendly.

Poly(aspartic acid) (or PASA) is a large molecule, called a polymer, made up of repeating aspartic acid subunits (called monomers). The aspartic acid monomers are linked together by heating – they react to form amide bonds on loss of water. First, loss of water forms a five-membered ring called a succinimide, and multiple dehydration reactions forms a polysuccinimide. This polymer is then treated with aqueous sodium hydroxide which attacks either C=O bond of the imides in a series of nucleophilic acyl substitution reactions – the term α unit or β unit is used according to which C=O bond of the imide is attacked. 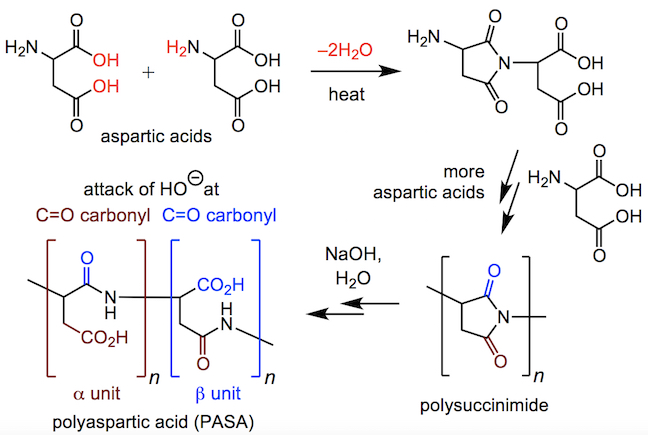 This is just one of the more complicated ways of linking together subunits to form a range of useful polymers, which we will explore in subsequent sections. First, we will introduce polymers and why they are important in sports, including use in protective equipment where strong, tough materials are required – ‘hard’ chemistry in action!

Take a look at some of our undergraduate videos, made as part of a first year undergraduate macromolecules course. Topics range from Running Trainers to Rowing, Formula One and Equestrianism.

For a beginning-of-week teaser, see if you can identify the 8 pieces of protective sports equipment in the collage below and post your answers.