This content is taken from the Cambridge Assessment English's online course, Exploring the World of English Language Teaching. Join the course to learn more.
View course

PLEASE NOTE: This course was retired on 28 Jun 2020. This means it is no longer being updated or maintained, so information within the course may no longer be accurate. FutureLearn accepts no liability for any loss or damage arising as a result of use or reliance on this information.

Exploring the World of English...

0:05Skip to 0 minutes and 5 seconds So Monica why did you become an English Language Teacher? Well ironically it’s because I wanted to learn German. I was a French graduate and I wanted to learn another language so I went to Germany to learn German, didn’t speak any German, so one way to go to Germany and work was to teach English. What about you? Well I think I became an English Language Teacher, I sort of went into it a bit by mistake.

0:26Skip to 0 minutes and 26 seconds I had done a bit of travelling and I quite fancied the idea of teaching overseas and working overseas and so I thought English language teaching would be a good way of being able to travel, visit other countries, meet other cultures and earn a bit of money at the same time. I’d always wanted to be a teacher. I was actually a primary school teacher before I moved into ELT. It was something I had wanted to do since I was little. Originally, to be very honest, it was to pay for my university tuition so I studied journalism at undergraduate level and on, I think it was my second semester, my dad turned round to me and said, “Right, you do it now.

1:06Skip to 1 minute and 6 seconds You pay for your own bills!” So I had to find the money from somewhere and my mum is also an English as a Foreign Language Teacher, or was anyway, so I started teaching. I wanted a change of career. I’d also just got married and I was looking to, before we settled down properly and had children and that kind of thing, I was looking for something to do in a different country so I used teaching as a way to finance going to Seville for a year with my wife. It was something that I was thinking about for quite a while but I never, to be honest I never thought that I could actually do it.

1:47Skip to 1 minute and 47 seconds And then I realised that all the aspects of being a teacher really suit my personality, like I really love to bring the potential out of people, I like to inspire people but I also like to work collaboratively with people and I’m a natural, I lead people quite naturally but I also like to shrink back and help people individually so it just really suited me and so I thought, OK I’ll try it and have a go and turns out it is suiting my personality quite well, which is a relief! I’ve been looking for a career change for a little while. I worked in big business for a number of years and I was just getting a bit jaded.

2:32Skip to 2 minutes and 32 seconds I wasn’t sure it was what I wanted to do for the rest of my working life so I was looking for something different and that was when I went to Spain just as a volunteer English teacher initially, working with unemployed people who had suffered because of the economic situation in Spain and I loved it! Just took to it and decided that was the direction I wanted to go in.

Why become an English Language Teacher?

Watch Monica, Marie Therese and other teachers talking about why they became English language teachers. Do any of their reasons match yours? Did any answers surprise you?

Here are some more reasons for becoming an English language teacher: 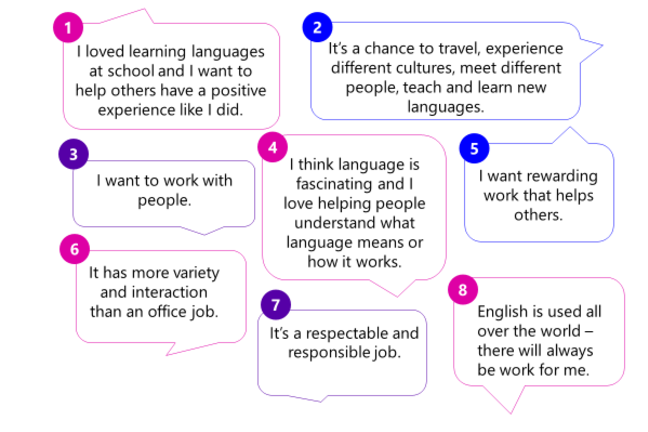 (You can click on the image to expand it.)

Thinking about your own reasons could help you to decide on the kind of teaching that would suit you best. Using the ideas in the video and the list above, write in the comment box your reasons for starting this adventure. Look for someone with similar or interesting reasons and like their comments.