The first category of livestock that we will investigate is the ruminants. Cattle, sheep and goats are called ‘ruminant’ animals because they have adapted stomachs for digesting fibrous feed - the parts of plants that other mammals cannot completely break down.

The ruminant’s stomach is very large and made up of four major chambers. The most important chamber is called the rumen, while the others are the omasum, the abomasum and the reticulum. 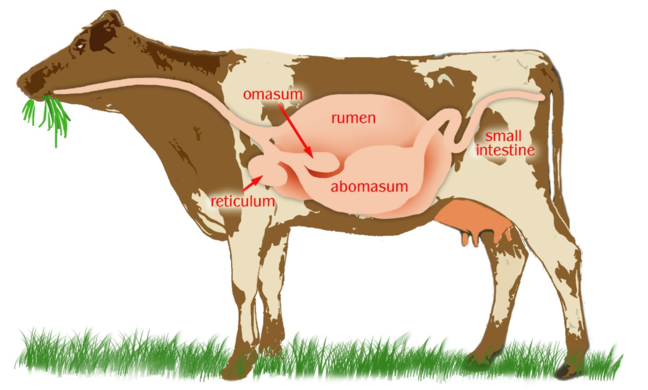 Why don’t we all eat grass?

Just like other animals, the ruminant’s own digestive enzymes can’t break down fibre to release energy. So they collaborate with billions of microorganisms (bacteria) which they host in the rumen. These bacteria can process the feed components, particularly fibre, to provide energy and nutrients [1]. This symbiotic relationship between ruminants and ruminal microorganisms allows them to occupy a niche in the food chain, making use of fibrous plant matter such as grass that can’t be used as human food. Cattle, sheep and goats convert fibre into energy and in turn produce high quality human-edible protein (meat and milk) [2].

To make the process of obtaining energy from fibre even more efficient, ruminants ‘ruminate’. They bring up and re-chew their food to break it down further.

There are disadvantages, however. To obtain enough energy from fibrous feeds, ruminants spend a long time each day eating and ruminating and they consume very large volumes. The microorganisms also produce gases, such as methane, which the animal then needs to release by belching. These gases are just a product of digestion but they do contribute significantly to the rise in greenhouse gases in the atmosphere.

The feeding management of ruminant animals requires a plentiful supply of fibrous feeds that we call ‘forages’, such as grass, hay (dried grass) or silage (fermented grass) [3]. In addition, some farmers supply supplementary grain to support growth and productivity [4]. 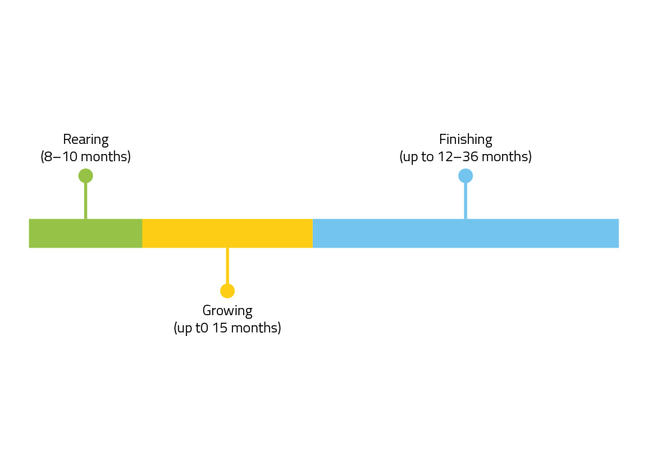 Beef calves are typically reared by their mothers up to weaning age. Calves can come from suckler cows (kept for beef production) or from dairy cows (kept for milk production) which have mated with a beef breed bull. After weaning, young beef cattle enter a phase of continuous growth, increasing in overall body size before entering the finishing phase. The finishing phase is a short period of maximum weight gain prior to slaughter. Farmers need to consider the optimum point for slaughter, when the amount of lean meat on the carcass reaches a maximum but there is not excessive fat. Over finishing is not financially viable and it adds to the environmental impact [6].

How beef is produced

There are two basic approaches to producing beef:

In other parts of the world, especially North America, intensive feedlot finishing systems are common. Feedlots maximise the number of beef cattle reared per unit of land by grouping animals in large yards and providing them with a continuous supply of high energy, high nutrient feed. This feed is typically made up of maize, grains and soya as well as forage [9]. 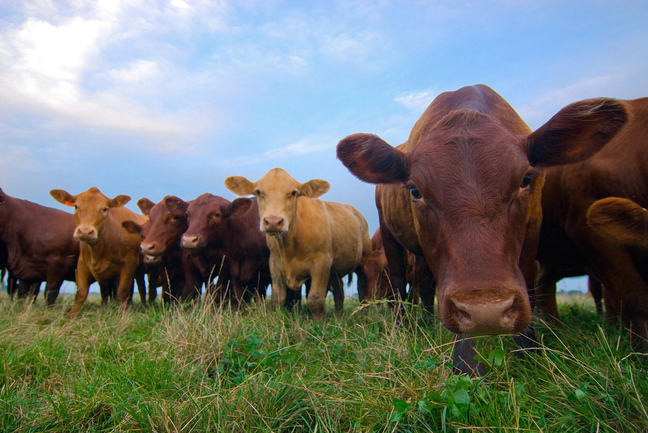 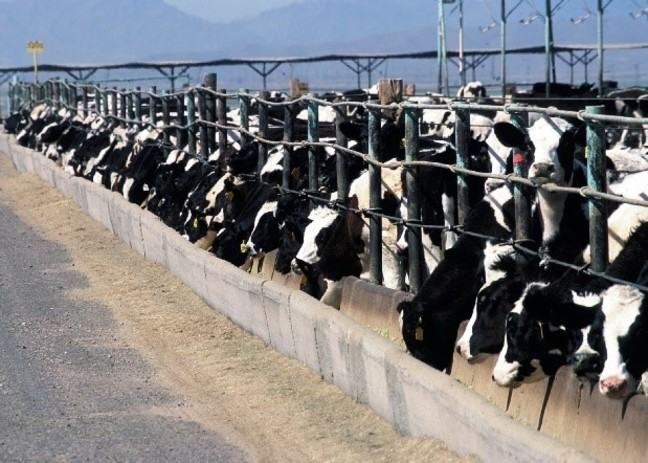 Beef production is generally considered less efficient than pig and poultry production due to needing more land, slower growth rates and increased greenhouse gas emissions [11]. However, as we will see in other livestock production systems, there are different ways of evaluating efficiency which can be measured in terms of financial profits, environmental impact and animal husbandry. Many factors influence growth rates and the time it takes an animal to reach slaughter weight. Cattle in grass-based systems have slower growth rates and therefore take longer to reach target weights than those in feedlot systems [10]. However, grass-fed beef may have higher nutritional value (it can contain beneficial omega-3 fatty acids) and despite the slower growing period it yields higher returns in terms of the price it fetches [12][13][14].

Efficiency can also be evaluated in terms of environmental impact. Feedlot cattle take less time and space to reach target slaughter weight due to the intense feeding and produce less gas (reduced ‘emissions intensity’) compared to grass-fed animals. On the other hand, feedlot beef cattle consume feeds that are grown on land suitable for producing crops for human consumption, such as grain and maize.

If we consider the feed conversion efficiency, which measures the amount of feed needed to produce 1 kg of meat, on average:

Are grass-fed cows better for the environment? Do you have access to grass-fed beef? What is the price compared to grain-fed? Would you pay more for it?