0:06Skip to 0 minutes and 6 seconds In Paul Krugman’s words, “Productivity is ‘almost everything’ in driving higher living standards.” But labour productivity is not the only driving force. So, what other factors can affect the living standards of future generations? Well, population ageing is one factor. This is where the older population– those 65 and older– increases and is greater in number than the young population– children 15 and under. Population numbers are often represented as a pyramid. And in the past, the young population was the largest, with the elderly being very small in number– which gave us a pyramid shape. But now we see this shape changing and becoming more like a coffin than a pyramid.

0:56Skip to 0 minutes and 56 seconds We see this happening around the world, especially in advanced countries. Let’s look at these countries as examples. Can you see your country listed here?

1:10Skip to 1 minute and 10 seconds This is happening because of lower fertility with fewer babies being born, combined with an increase in life expectancy as the older population live longer. There has been a dramatic decline in fertility since the 1960s, which you can see in this chart for Australia, Europe, the US, and China. For the advanced countries, this is called the demographic transition. And the decline in the number of children born is linked to the advancements in those societies. In the case of China, the decline is due to the government policy that limited the number of children families could have.

1:54Skip to 1 minute and 54 seconds You will hear a lot of concern expressed by governments and society about the issue of population ageing, and the impact it will have on the living standards of the next generation. But here, we will argue that the effects are, in fact, quite small compared to the effects that productivity growth has. Let’s take a look at why. For a country to have economic growth to increase living standards, they need a robust workforce to produce goods and services, and to pay taxes that will support the older generations who no longer work.

2:27Skip to 2 minutes and 27 seconds So countries have kept a close eye on fertility rates, because the decline seen in some countries is having a powerful effect on the population share who are in the workforce. The replacement level to maintain good numbers in the workforce– with those entering as the older population leave– is approximately 2.1 children per family. However, the fertility rate for most countries is expected to be less than that. Despite falling fertility rates, countries can still have working age population growth through immigration, and increased life expectancy with some people working longer.

3:08Skip to 3 minutes and 8 seconds The working age population share– in advanced countries and other countries– has been affected by powerful forces over the last 60 years, since the Second World War. In most advanced countries, this working population is projected to decrease by about 12% between 2015 and 2100.

3:34Skip to 3 minutes and 34 seconds Not much, really, considering it is occurring over an 80 year period. That’s a reduction of about 0.15% per year. So for example, if you had $1,000 this year, you would have $998.50 next year. And this rate of reduction would continue so that after 10 years, you would have $985.50. Most people would consider this a small reduction over 10 years, although poor people would find it harder than richer people. Compare this, for example, with the effect that productivity growth has on living standards. Productivity growth has tended to increase real wages– which means what wages will buy– by an average of more than 1% per year. Now, in recent years, this has slowed somewhat. But it does tend to go in cycles.

4:27Skip to 4 minutes and 27 seconds And it would be a brave person to suggest that after 200 years, this process will cease permanently. A 1% growth per year would increase your $1,000 this year by about $10 to $1,010 next year. This would swamp the effect of a 0.15% per year reduction in living standards due to population ageing. The key message here is that while the decline in fertility since 1960 has been dramatic, the effect on living standards

5:03Skip to 5 minutes and 3 seconds has, in fact, been quite small– especially when compared with the effect of productivity growth, which is the primary driver of living standards in the long run.

Does fertility and ageing have an impact?

For those of you interested in how we express some of these concepts from the video in economics, let’s take a look at the algebra and symbols we could use to define the impact on living standards.

Then we have by definition:

Now let’s look at what this calculation above means. Starting with the left-hand side of the equation, Y/N (which is the output per person), is important for living standards because output produced today can be consumed either today or in the future – and you’ll remember that we define living standards as the consumption of goods and services per person.

The algebraic relationship tells us that Y/N is driven by two factors:

We now need to dive a bit further into what drives L/N (employment to population ratio). It is driven by three variables:

Let’s focus on the first of these – the working age share of the population – which was discussed in the video and as the graph below shows, has been decreasing (due to fertility rates) for the past 60 years, since World War II. 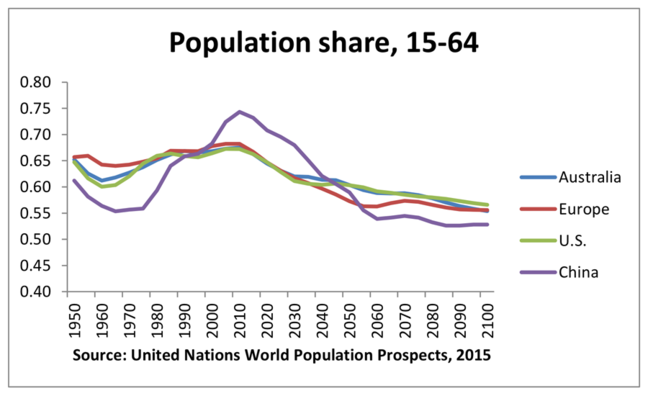 The steady fall in this ratio since 2010 is due to the eventual smaller population share of younger people and rising share of older people – which is the very definition of population ageing. It is this which is projected to continue for many decades and in most advanced countries this working age population share is projected to decrease by about 12 percent between 2015 and 2100. This would imply a 12 percent decline in the Y/N ratio and in living standards with everything else remaining constant.

As we saw in the video, this 12 percent decline won’t really impact our living standards much at all considering it is occurring over at least an 80-year period. So it is not population ageing that we need concern ourselves with when looking at the next generation’s future, but productivity growth which has a greater impact and is the primary driver of living standards in the long run.

Watch the video above and share any comments you have in the discussion below. For instance, were there any points that surprised you about the effect of fertility and population ageing on the economy?

You may also wish to dig deeper by reading the articles linked in the ‘See Also’ section below.