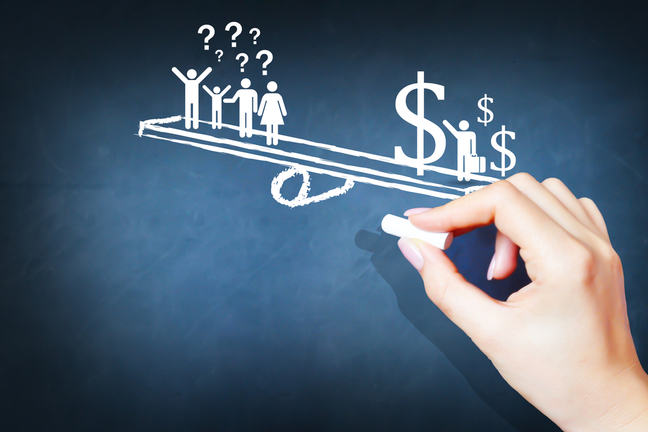 Apart from the GINI Coefficient, we can also evaluate inequality in terms of income ratios. This measures the gap between the rich and the poor.

A higher ratio value indicates a wider gap between rich and poor. For instance, S80/S20 is a commonly used ratio (there are others). It represents the average income of the 20% richest to the 20% poorest.

How do income ratios compare between various countries?

Let’s look at some examples:

How is inequality changing?

A note of caution!

With this in mind, the table below can be used to draw some general conclusions.

The data would indicate that in several countries the distribution of income is becoming more dispersed, while the gap between the rich and the poor is progressively widening. Obviously, this conclusion is based on limited sample of countries.

Also, the extent to which inequality is increasing (if it is increasing at all) changes quite significantly across different countries. Yet, if one had to pick between “increasing” and “decreasing”, based on these data, the most likely choice would appear to be “increasing”.

Notes on reading the table

Considering that inequality only moves slowly over time, are “small” changes of a few percentage points in a period of 10 or 20 years cause for concern? What do you think?

See if you can you find your country in the table or conduct your own research.