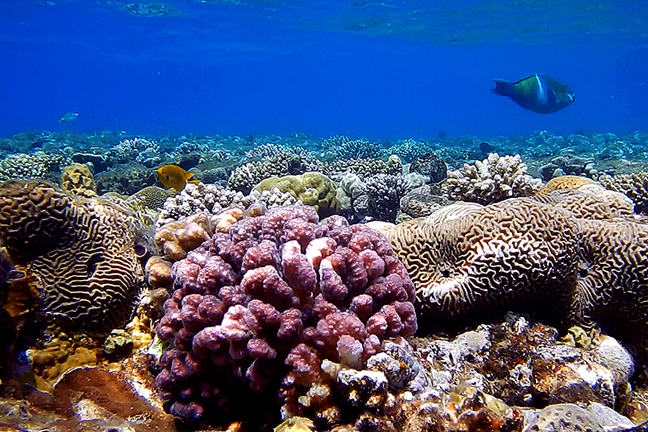 What are corals and where do they live?

Corals reefs are structures that are entirely built from living organisms. Even though they cover less than 1% of the world’s ocean floor, it has been estimated that ~25 % of all marine biodiversity depends in one way or the other on the presence of coral reefs. In this step, Jörg Wiedenmann and Dr Cecilia D’Angelo explain more about these beautiful and iconic, but fragile, ocean inhabitants. 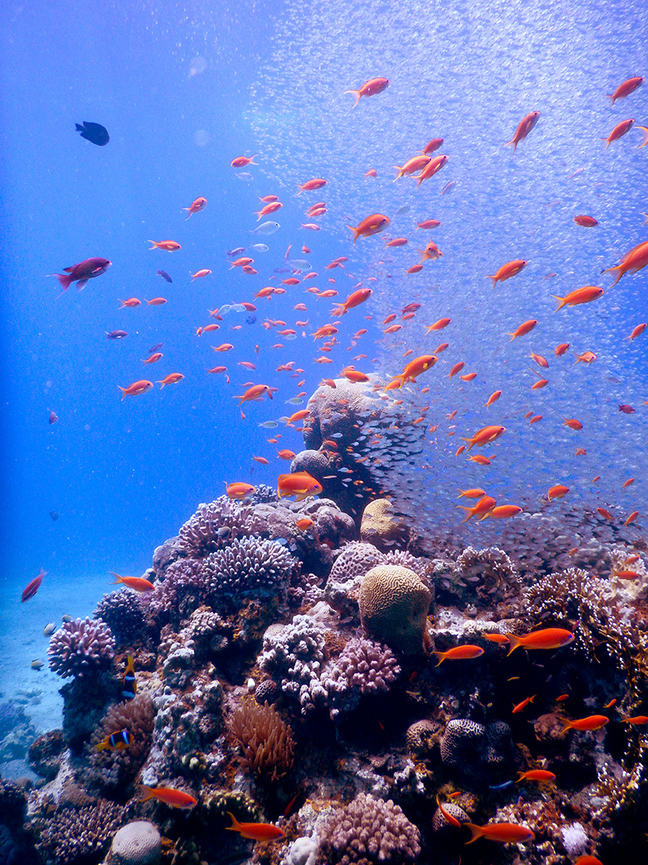 Coral reefs are formed mostly from corals but they are home to numerous other species. Photo by J. Wiedenmann & C. D’Angelo © University of Southampton 2019.

Where do you find coral reefs?

You may be surprised to learn that coral reefs are not only found in tropical, sunlit waters. They can also occur in cold and deep water; but these reefs are produced by different species compared to the warm and shallow water reefs that are found mostly along the equator between the tropics of cancer and capricorn. Reefs can come in patches of a few meters length, but they can also form complex structures that stretch over more than 2000 km such as the Great Barrier Reef. While corals are the main reef architects, other organisms with hard skeletons, such as calcareous algae, also contribute to reef formation.

Aerial view of a fringing coral reef in the Red Sea. Photo by J. Wiedenmann & C. D’Angelo © University of Southampton 2019.

Corals belong to the phylum Cnidaria along with jellyfish and sea anemones and use their stinging cells to capture their zooplankton prey. In contrast to their gelatinous relatives, they deposit a hard limestone skeleton that is key to the formation of reefs. Many stony corals form colonies consisting of numerous polyps (individuals) and the great majority of corals grow permanently attached to hard structures such as rocks or the dead skeletons of their predecessors. Corals can reproduce asexually by fragmentation or budding or sexually by the production of numerous free-swimming larvae.

Corals are true animals, but in the case of warm water corals, many species form a vital partnership (symbiosis) with microalgae from the group of dinoflagellates.

Are all corals brightly coloured?

Another answer which may surprise you! Although some corals are very brightly coloured, many of them are in fact brownish in appearance; the photosynthetic pigments of the algal symbiont shine through the tissue of the animal host, thereby dominating the coral colour. 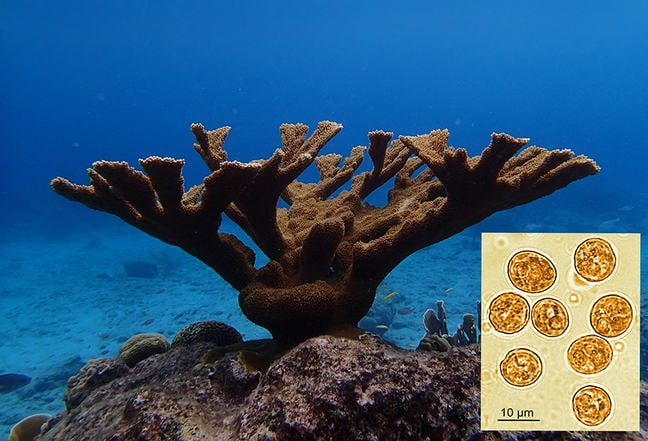 A colony of the elkhorn coral Acropora palmata from the Carribean growing on a rock. The small nodular structures on the coral surface represent individual polyps. The brown colour is caused by the presence of symbiont algae in the coral tissue. The overall shape indicates the presence of the substantial limestone skeleton that is located under the thin layer of living tissue. The inset shows a microscopic image of the symbiont algae along with a scale bar. Photo by J. Wiedenmann & C. D’Angelo © University of Southampton 2019.

Making the best use of nutrients available

The symbiotic partnership between the animal host and the microalgal partner enables them both to thrive in tropical waters despite the relatively low concentrations of the key nutrients nitrogen and phosphorus. These nutrients are vital building blocks for cellular compounds such as DNA and proteins. Without a sufficient supply of nitrogen and phosphorus neither the animal host nor the algal symbiont can grow. Nitrogen and phosphorus are contained in reef waters in dissolved inorganic form as ammonium, nitrate and phosphates. However, nutrients in this form cannot be accessed by the animal host. In contrast, the algae residing inside the coral cells are perfectly able to take up nutrients in the dissolved inorganic form from the water and turn them into compounds such as amino acids that can be also used by the coral host.

Schematic diagram of nutrient exchange between the partners of the coral-microalga symbiosis. N is Nitrogen, P is Phosphorus. Photo by J. Wiedenmann & C. D’Angelo © University of Southampton 2019.

Furthermore, the photosynthesis of the algal partner produces sugars and lipids, substantial parts of which are translocated to the host. In return, the coral host preys actively on zooplankton, a source of organic nitrogen and phosphorus in organic forms. The nitrogen and phosphorus-rich waste products resulting from the digestion of the food by the coral are “recycled” by their algal partners and help the algae to grow while retaining the precious nutrients within in the symbiotic association. Thereby, the symbiotic partners work together to overcome the individual limitations to use different nutrient sources and to gain a competitive advantage in a nutrient poor environment in which both partners by themselves would struggle to survive.

To make sure that the algal partners can fulfill their “symbiotic duties” in the best possible way, some coral hosts produce colourful pigments that lend the striking green, red, pink, purple and blue colours to the animals. These pigments alter the intensity and colour of the sunlight inside the tissue to benefit the photosynthetic performance of the algal partners. 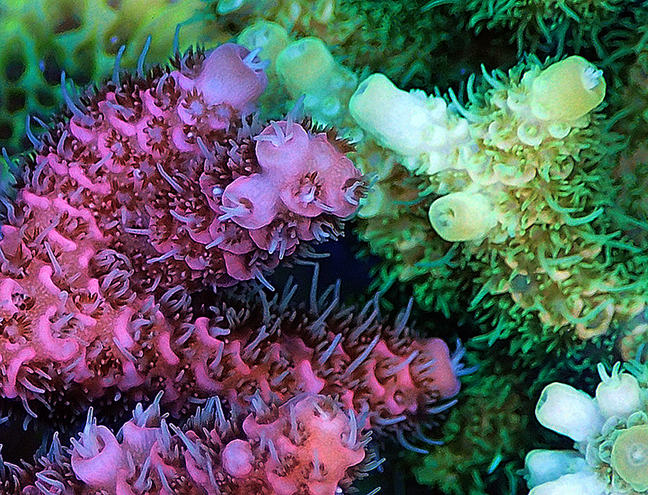 Sunscreening pigments produced by the coral animal lend the colour to the red and green morph of Acropora millepora. Photo by J. Wiedenmann & C. D’Angelo © University of Southampton 2019.

Specifically, in shallow water where light intensity is often high, these pigments can act as sunscreens for the symbionts. In deeper water, the host pigments help to spread the light in the coral colony to ensure that the symbionts in deeper tissue layers remain sufficiently illuminated. Find out more about coral colour and the function of pigments in the shallows and in deep water!

Finally, it is thought that the use of carbon dioxide (CO2) by the algal symbionts may help the corals to form their limestone skeletons. The mechanism behind this idea is that the algal partners take up CO2 to produce sugars and other carbon-rich compounds in the photosynthetic reaction. Thereby, the water in direct proximity of the coral cells that form the skeleton becomes slightly less acidic. This could make it easier for the corals to convert the dissolved calcium carbonate in the insoluble form that is needed to build up the skeleton.

What do you notice about the distribution? What (if anything) surprises you about it? Share your observations and thoughts in the comments below.