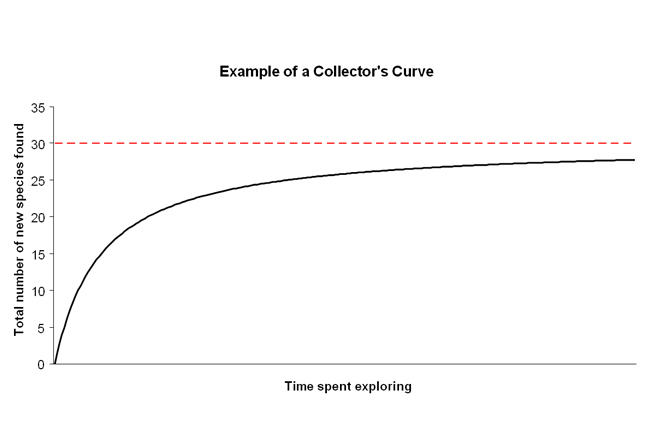 Example of a Collector's Curve

How can we tell if we have discovered all the species in a particular ocean environment that we’re exploring? And can we sometimes estimate how many undiscovered species are still out there waiting to be discovered?

It sounds almost impossible: knowing how much we don’t yet know. But we can use a technique called a “Collector’s Curve” to tell if we have probably discovered all the species that are present in an environment that we are exploring - and if we haven’t discovered them all yet, sometimes we can even use the curve to estimate how many undiscovered species are still out there.

The Collector’s Curve works like this: when we’re exploring somewhere for the first time, whatever we find initially will be “new” to us. But as we continue to explore, then there’s a growing chance that we’ll encounter things that we have seen before. Although some things may still be “new” to us, it will gradually get harder to find “new” things the more we look. And eventually, when we’ve found everything out there, then no matter how much longer or harder we look, we won’t find anything “new” that we haven’t already seen before.

If you like, you can try this for yourself using a bag of sweets that have different colours or types. Open the bag, close your eyes, and reach in to take out a sweet, then have a look at it. The first one is guaranteed to be a “new” type or colour that you haven’t seen before from that bag. Then take another sweet from the bag; depending on how many different types of sweet are in the bag, it might be another “new” one, different to the first sweet, or it could be the same as the first one. Keep doing this, and eventually you’ll stop finding “new” types of sweet, once you’ve sampled all the different types that are in the bag, even if you haven’t emptied the bag (i.e. some of it remains “unexplored”).

You can even make your own “Collector’s Curve” from doing this, if you keep a tally of number of sweets taken from the bag (the x-axis of the plot) along with the cumulative number of different types that you have encountered (the y-axis of the plot).

So let’s apply that approach to exploring for new species: if we plot the number of new species discovered in an environment against the amount of time spent exploring that environment, we get a curve that gradually approaches a limit (as shown in the example of a Collector’s Curve at the top of the screen). In the early period of exploring the environment, the curve is very steep - at that time, we find new species very quickly, because we’ve only just started exploring. But gradually the curve flattens off - as we explore more, it gets harder to find new species that we haven’t already seen. Eventually, the curve starts to approach a limit, which represents the total number of species in the environment that we are exploring (in our example at the top of the screen, that number is 30, shown by the red dashed line).

A Collector’s Curve therefore shows us the rate at which we are discovering new species, and how that rate changes over time. When the rate drops to zero (where the curve flattens out horizontally), we can be confident that we have probably found all of the species in the environment that we are exploring.

And even if the Collector’s Curve hasn’t quite reached its limit, but is flattening out horizontally, we can extend it to predict at what level it should flatten out - in other words, we can estimate how many undiscovered species are likely to be still out there. So if a Collector’s Curve is flattening out horizontally and can be modelled mathematically, then how many undiscovered species are still out there can become a “known unknown”. Collector’s Curves can therefore be a powerful technique for exploring the unknown.

Reaching into the ocean depths

The curve we’ve looked at so far is a hypothetical example; now let’s look at a Collector’s Curve constructed from real data. In this case, it is the actual Collector’s Curve for new animal species described from deep-sea vents. The curve therefore shows the rate at which new species of animals have been described from deep-sea vents since scientists first started visiting those environments on the ocean floor.

(You do not need to post your answers in the comments, although we’re interested in hearing your thoughts on number 4.)