This content is taken from the University of York's online course, Exploring Stone Age Archaeology: The Mysteries of Star Carr. Join the course to learn more.
View course
1.17 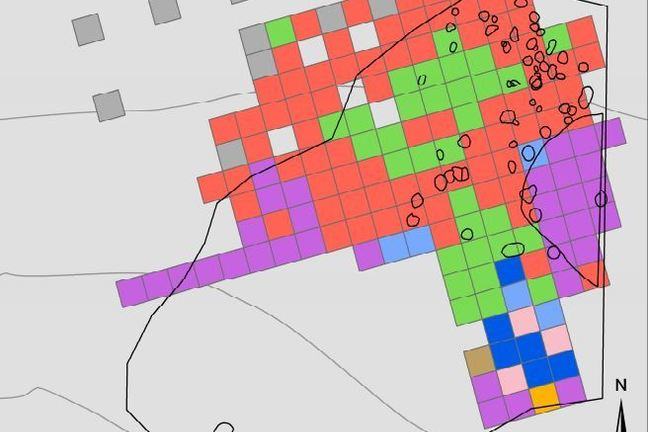 Plot of geochemical analysis around the central structure

What does geochemistry tell us about activities at Star Carr

Firstly samples from a freshly excavated surface are taken using a trowel across a gridded out area. Charlie then applied multi-element analyses using ICP-AES. Six elements were selected for statistical study as they made up the highest contributions of the samples: aluminium, calcium, iron, potassium, magnesium and phosphorus. Manganese was also included because it showed a high degree of variability across the site. Charlie then conducted grouping analysis and plotted her results using GIS.

The maps Charlie produces show which grid squares are similar in composition and abundance to which other grid squares, taking into account all elements recorded in each grid square. The purple area with the line to the right of the image denotes the position of a structure and it would appear to be depleted in a range of elements relative to other grid squares in the vicinity. The results showed that there was a consistent depletion in the values from the central house structure (showed in the picture above as the purple area to the right, bounded by a line and postholes). What is interesting about this is that we had expected the house structure to have higher readings. Given that the demarcation correlates with the position of a structure, this would suggest an anthropogenic cause, in this case the depletion may suggest cleaning of the inside of the structure, suggesting people kept this area cleaner than other parts of the site.

The other area of interest is to the southwest of the structure (where there are a range of different colours representing different groupings). In this area there was also an unusual pit or posthole which was filled with burnt flint and bone. This area appears to be more indicative of an occupied zone due to the higher phosphorus/phosphate levels - perhaps in this area people were discarding some of the waste which was cleaned out of the house.

Although this method does not tell us exactly what people were doing where, it does demonstrate the potential of using it on Mesolithic sites and may be of use in interpreting spatial patterns when features such as post-holes are not present.