This content is taken from the University of Cape Town's online course, Extinctions: Past and Present. Join the course to learn more.
View course
4.1

0:10Skip to 0 minutes and 10 seconds In the previous talk we spoke about the end of the Permian extinction event, and you will recall that that was the biggest mass extinction event that ever occurred. We’ve seen that almost every ecosystem in both terrestrial and marine environments crashed. What we do see thereafter is that, in the Triassic, life bounced back. It took about 8 million years or so for complex ecosystems to become re-established in the oceans, but on land things took a little while longer. Maybe about 10 to 20 million years before more complex ecosystems were re- established. What we see on land is that those few mammal-like reptiles that survived, they begin to re-establish themselves.

0:56Skip to 0 minutes and 56 seconds The cynodonts, that were rather sparse in the late Permian, they somehow survived the end of the Permian extinction event and they begin to radiate extensively in the Triassic. What we see is that small to medium-sized carnivorous forms evolve. And we also see, amongst the cynodonts, a group of herbivorous forms called the chiniquodons and the diademodons also developed. In the Permian, the dominant predators were the mammal-like reptiles. These were the gorgonopsians and the therocephalians. But now, in the Triassic we see a different group of predatory reptiles evolving. These are the archosaurs, the so-called ruling reptiles. At the mid-Triassic, we see there are two main groups of archosaurs. One becomes the crocodilian lineage and the other becomes the dinosaurs.

1:50Skip to 1 minute and 50 seconds So this group is a very, very important group. The rauisuchians, which developed from the crocodilian lineage, were ferocious predators of the time. They dominated terrestrial ecosystems. They were large animals, about five meters in length. They had these big heads, about 60 centimetres long and they had powerful jaws with really vicious recurved teeth. Without a doubt, they were the top predators of the time. But, we see that, when we look at these rauisuchians, they are on the crocodilian lineage. What’s happening on the dinosaurian lineage? This is very, very interesting. Until recently, it was thought the dinosaurs evolved about 25 million years after the end of the Permian extinction event.

2:41Skip to 2 minutes and 41 seconds But recent discoveries, particularly in Tanzania shows a group of archosaurs called the Silesaurans which are very very similar to dinosaurs and these are occurring about 242 million years ago. These findings suggest that dinosaurs may also have arisen very early, so earlier than previously thought, and that they only became dominant in the later part of the Triassic ecosystems. Thus, towards the end of the Triassic, although diversity levels were not the same as they were in the late Permian, we certainly begin to see recovery in some aspects of the ecosystem. So we begin to see these complex trophic levels becoming established. But then, just when we think things are going fine, the late Triassic extinction event occurs.

3:38Skip to 3 minutes and 38 seconds This happens about 200 million years ago. On land, we see that the herbivorous dicynodonts, the chiniquodons and the rhynchosaurs were all wiped out. Plants somehow were not as severely affected. We see some displacement in terms of where they occur, but generally plant communities are more or less stable. Just a few minor extinctions occurring there. So in the seas we find that marine reptiles such as the ichthyosaurs, the nothosaurs, and the plesiosaurs also are affected by this extinction event. They have a total loss of about 64 percent of families present at the time. The cause of the End Triassic extinction event is uncertain. It may have been one of a few things.

4:30Skip to 4 minutes and 30 seconds Some people have suggested that there was a crisis caused by drought, so again environmental change. Others have suggested that maybe the change from a dominance of Gondwanan seed ferns to conifers might have been the trigger that caused this extinction event. There’s also been a suggestion which seems these days to to be one that most people support is the one that perhaps increased volcanism along fracture zones, that actually started during the breakup of Pangaea, might have caused huge eruptions of volcanoes so basically this increased volcanism would have spewed out lava, sulphur, methane, and all of this could have then caused major effects in the atmosphere, would have resulted in acidification of the oceans and we would have had global warming.

5:23Skip to 5 minutes and 23 seconds So, it appears that this may have been the one cause that would have been the most likely culprit for the end of the Triassic extinction event. But nevertheless, irrespective of whatever caused this extinction event we know that it led to 76 percent loss of marine and terrestrial species.

During the Permian, cynodonts (a kind of therapsid) were quite sparse, but they survive the extinction event, and experience a significant adaptive radiation thereafter, and eventually give rise to mammals. The top predators of the Triassic were taken by archosaurs - which give rise to two fearsome lineages - the crocodilians and the better-known, dinosaurs, who became dominant in the latter part of the Triassic. Remnants of these lineages are present among modern animals - but we will talk more about that later this week.

Some major events in the history of life on earth chart 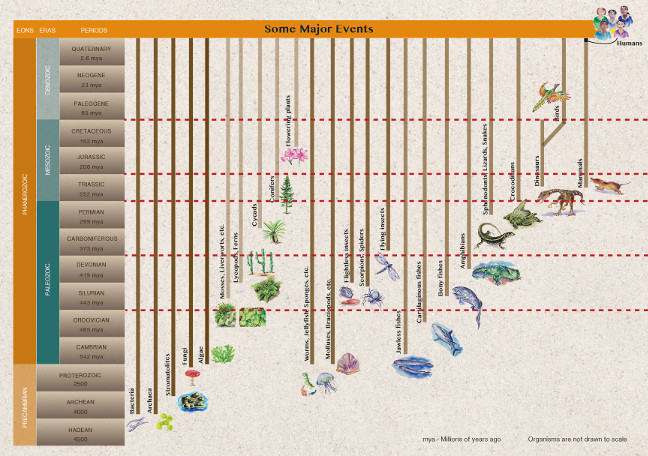 The fossil record tells us that the long recovery after the End Permian started to show increasing diversity in the late Triassic period - but it is also around then the fourth extinction struck (about 208 mya). On land, large animals were most affected, as well as an estimated 64% of marine reptiles. Plant life did not suffer many extinctions this time. Although scientists have some evidence to work from, there are several theories about the causes of the End Triassic extinction event. In the next step, I have summarised some of the key ideas about what happened.