0:07Skip to 0 minutes and 7 seconds Oceans cover 70% of the Earth’s surface. And when tsunamis and megatsunamis are triggered within them, they present a hazard and a risk to human life. But natural water-related hazards aren’t simply confined to our oceans. Floods are another hazard, and like tsunamis and megatsunamis, there are different types of flood triggered by different causes. Normal floods occur due to rainfall. When it rains lightly, water can be absorbed into the ground. It then makes its way to rivers and flows away. But when it rains more heavily, the sheer amount of water overwhelms the ability of the ground to soak it up and the ability of rivers to carry it away.

0:48Skip to 0 minutes and 48 seconds The river then climbs out of its banks and can enter cities and other populated areas, causing damage, disruption, and danger to life. Certain conditions, like slow-moving rain clouds, intense rainfall, monsoons, or certain patterns of wind, can make flooding even worse. But there’s a limit to the amount of flooding that can happen, because there’s only so much rain that can fall over a certain period of time. This helps to control the amount of flooding that can be experienced. There is, however, a different type of flood, a more extreme type, called a megaflood. It’s different because instead of being caused by rainfall, megafloods are caused by large volume of water being released from behind some kind of store.

1:34Skip to 1 minute and 34 seconds Usually, this is a lake trapped behind a dam of some kind, but it can also be water released from a glacier when a volcano erupts underneath it or when the sea floods into an area that used to be dry land. Sometimes we call this kind of megaflood an outburst flood, as it’s caused by water bursting out from one of these stores. Unlike floods, they don’t just depend on the amount of rain that’s fallen before and during the event. They release water that’s been built up over longer periods of time from countless individual storms, and that means that megafloods have the potential to be much more extreme than floods. But what kind of dams can produce a megaflood if they fail?

2:19Skip to 2 minutes and 19 seconds Well, the artificial dams that engineers build on rivers can definitely produce megafloods if they fail. The Banqiao Dam in China in 1975 and the Bento Rodrigues Dam disaster in Brazil in 2015 both released small megafloods. But some of the most enormous megafloods are produced when large natural dams formed on rivers fail. Natural dams can be formed when a large landslide or a glacier blocks a river. And the larger the landslide or glacier, the more water that’s stored and then released from behind it. Very gradual changes in sea level can also cause megafloods from what were once seas flooding huge areas of previously dry land. Both of these cases can produce truly huge megafloods.

3:09Skip to 3 minutes and 9 seconds This type of megaflood occurred several hundred of thousands of years ago in the Dover Straits between modern-day England and France. Previously, this area was a dry river valley, but the rise of surrounding sea levels led to as much as 1 million cubic metres of water per second pouring into the Dover Straits from the North Sea. That’s enough water to fill 400 Olympic-sized swimming pools each second. This extreme event turned what was once a broad, gentle river valley into the deep, wide trough fell by the sea that we see separating England and France today. This is just one example of a megaflood that happened long ago.

3:51Skip to 3 minutes and 51 seconds Later, we’ll take a more in-depth look at another significant megaflood from the past and explore the geological evidence proving that it happened.

What is a Megaflood?

In this video, Dr Dan Hobley explains the difference between floods and megafloods.

In the video, a number of different stores that can cause megafloods were mentioned.

Two extreme events in our recent history we referenced were both caused by the failure of artificial dams.

The failure of the dam led to 701 million cubic meters of water being released in 6 hours.

Around 60 million cubic meters of iron waste was released into the Doce river and eventually into the Atlantic ocean.

Megafloods can also be caused by the failure of natural dams.

These are formed when a landslide or glacier blocks a river. If these are particularly large they can store vast amounts of water.

One recent example of a landslide blocking a river is in Attabad, Pakistan. In 2010 a massive landslide blocked the Hunza river and created Attabad Lake.

Another cause of megafloods are changes in sea level. This type of megaflood occured around 450,000 years ago in the Dover Straits, between modern day England and France. 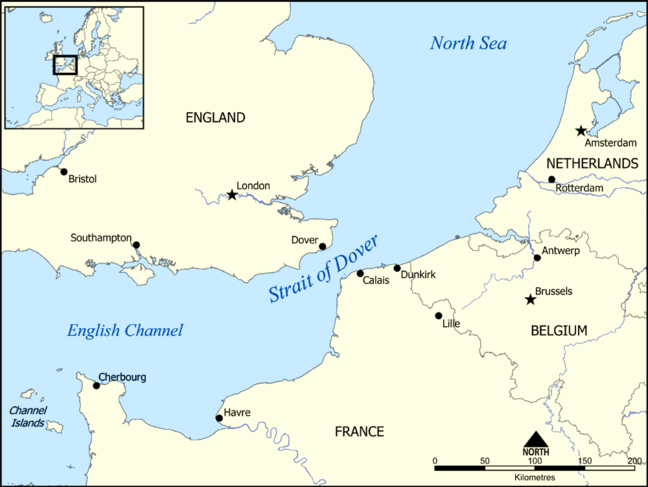 Map of the Dover Straits between England and France by NormanEinstein is licenced under CC BY-SA 3.0

In this case the Dover Straits which were previously a dry river valley were completely flooded due to gradual changes in sea level. This separated modern-day England and France.

This was a truly extreme event that left a lasting impact on our planet.