0:08Skip to 0 minutes and 8 secondsSo we considered megafloods and megatsunamis as extreme events and looked at different examples from the past that have had a significant impact on our planet. By now, you should understand that these mega events aren't defined by how big they are, but what causes them. We've seen that floods and tsunamis are created by the regular and repeated activity of rainstorms and earthquakes, whereas megafloods and megatsunamis are created by chance-- one-off events. So do you think this means that megatsunamis and megafloods are always going to be bigger than tsunamis and floods? Let's take a look at two examples to answer that question.

0:48Skip to 0 minutes and 48 secondsOur first example occurred in 1903 when a rockfall about the size of a large office building slid almost a kilometre downhill into the Upper Arrow Lake in Canada. The massive rock generated a megatsunami when it hit the lake, causing massive disruption to what was then an important shipping route. Our second example occurred in 2011, when the magnitude 9 Tohoku earthquake off the coast of Japan caused a tsunami that wreaked havoc and caused tens of billions of dollars of damage. So which do you think was the biggest? Well, it was actually the tsunami. It reached wave heights of around 7 metres, and this is about twice as high as the megatsunami in Canada, which only reached wave heights of 3 metres.

1:32Skip to 1 minute and 32 secondsThe biggest tsunamis can often be bigger than the smallest megatsunamis. Is the same true of floods and megafloods? Let's take a look at another two examples and find out. In 2010, the Eyjafjallajokull volcano erupted on Iceland and created a megaflood caused by the melting of the glacier by its volcanic heat. But in the same year, Pakistan experienced terrible monsoon-driven floods that submerged large areas of the country. Millions of people were affected. Houses and farmland were destroyed, and 1,600 people were killed. But which was the biggest? Well, the Icelandic megaflood had a total discharge of about 3,000 metres cubed per second. That's about the equivalent of a single Olympic swimming pool going by every second.

2:20Skip to 2 minutes and 20 secondsWhereas the highest discharge of water from the Pakistan floods was actually 10 times more than the Icelandic megaflood. So the biggest floods and tsunamis can be both considerably larger than some of the smallest megafloods and megatsunamis. But how do we measure the size of tsunamis and the size of floods so that we can confidently compare them? One way of determining the size of a flood is by its discharge. This is simply the volume of water that flows by every second. This is a good way of judging size, because the larger the discharge, the more water there is flowing through every second.

2:57Skip to 2 minutes and 57 secondsThe deeper the flowing water will be, the larger area it will cover, and the more powerful the flow will be. This is the same measurement we use to compare the 2010 Icelandic megaflood and the Pakistan floods earlier. When we think about tsunamis, it's harder to measure a discharge. Instead, the size of a tsunami is often described by how big the wave is. That's the height of the crest of the wave compared to the ocean around it. This is important, because a taller wave carries more water with it as it moves, and this same water will eventually come onto the land-- if and when a tsunami reaches the shore.

3:35Skip to 3 minutes and 35 secondsIt is also important because our defences against tsunamis in places vulnerable to big earthquakes are usually large walls, so if the wave is taller than the wall, the tsunami will flood into the area behind the barrier. The Japanese Tohoku tsunami of 2011 we mentioned earlier was a tragic example of this, as the sea walls protecting the Fukushima nuclear reactor were designed to resist a 6-metre tsunami, but were overwhelmed by the 14-metre wave that actually arrived at the shore.

4:04Skip to 4 minutes and 4 secondsIf we were to continue to compare floods and tsunamis with their mega equivalents over hundreds, thousands, and millions of years, what we'd begin to see is that although the largest floods and tsunamis can be bigger, their mega equivalents are capable of producing truly cataclysmic discharges of water and can generate terrifying wave heights of hundreds and hundreds of metres tall. Only megafloods and megatsunamis can be truly enormous, and therefore truly extreme.

How extreme are these events?

In this video, Dr Claire Earlie compares tsunamis and floods with their extreme equivalents.

In order to make a comparison between floods/tsunamis and their extreme equivalents we need some kind of measure for both.

Measuring the volume of water (discharge) that flows by per second is a good way of judging the size of floods. This measure allows us to determine the depth of flowing water, the area the water covers and the power or velocity of the flowing water. 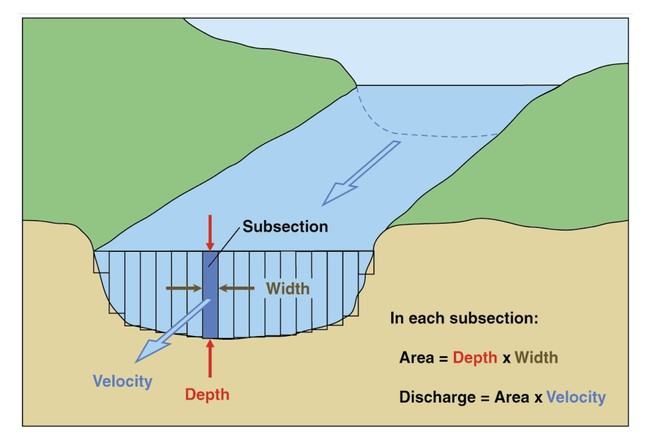 In the video we compared the 2010 Pakistan floods and a megaflood caused when the Eyjafjallajökull volcano erupted in Iceland. Maybe you were surprised to find out that the Pakistan floods were actually larger than the Icelandic megaflood?

Using the measure we’ve outlined above we can add another megaflood we’ve looked at to broaden the comparison.

As you can see the Dover straits megaflood vastly outstrips the Pakistan floods and highlights how when we look at these events over geological timescales we’ll see how megafloods are truly extreme events.

Tsunamis are typically measured by the size of the wave. In the diagram below we can see how the tsunami wave height is measured by reference to the sea level around it. The height of the tsunami results in a greater amount of water being carried to the shore, this is represented by flow depth in the diagram

In the video, we also saw how a regular tsunami was larger than a megatsunami. However, just like floods let’s use the measure we’ve described above and add some other events that we looked at earlier.

This provides a stark example of just how extreme megatsunamis and megafloods are when viewed over geological timescales.

These events have had a significant impact on our planet and help us to understand Earth’s history.