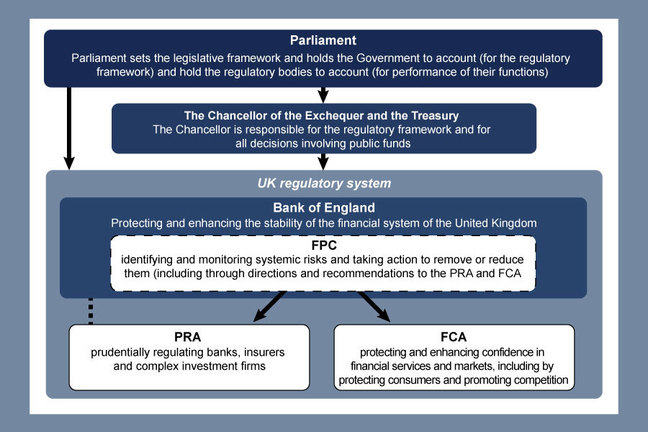 Roles and accountabilities in the new regulatory system. (Click to expand)

The aftermath of the financial crisis saw a major overhaul of the regulation of financial services – both in terms of the institutions charged with regulatory responsibilities and in terms of how regulation is applied to business in the sector.

With effect from April 2013 the regulation of the financial services industry was formally passed to the Prudential Regulation Authority (PRA) – a subsidiary of the Bank of England – and the Financial Conduct Authority (FCA).

The PRA’s statutory objective is to promote the safety and soundness of PRA-authorised firms. It aims to achieve this by ‘seeking to avoid adverse effects on financial stability, and in particular seeking to minimise adverse effects resulting from disruption to the continuity of financial services that can be caused by the way firms run their business or upon their failure’ (Bank of England and FSA, 2012, p. 5).

This, however, does not mean ensuring that no financial firm goes out of business: ‘firm failures will happen, but the PRA will seek to ensure that they do not result in significant disruption to the supply of critical financial services, including depositors’ ability to make payments’ (Bank of England and FSA, 2012, p. 5).

While the PRA has inherited the FSA’s detailed prudential policy framework, it is developing this to ensure that it can achieve its core statutory objective.

The FCA has the strategic objective of ensuring that the relevant markets function well. To support this, it has three operational objectives (FCA, 2013):

As with the PRA, the FCA has inherited and is reshaping many aspects of the FSA’s regulatory framework. It is particularly focused on the senior management and board-level involvement in decisions made by financial firms about their products and how these are marketed to their customers – an area of regulation referred to as ‘conduct risk’.

Liaison between the PRA and FCA

Clearly the PRA and FCA cooperate closely. The fact that the FCA is the conduct regulator for PRA-authorised firms and the conduct and the prudential regulator for many other smaller UK firms is suggestive of potential overlaps – and perhaps conflicts – between the regulatory activities of the two organisations. To address these potential operational problems, a Memorandum of Understanding between the two authorities has been drawn up. This addresses the need for, and the process of, coordination between the PRA and FCA while recognising their separate, independent mandates and statutory objectives.