In this step we’ll show you some real examples of the different types of agricultural technology used on fields today. 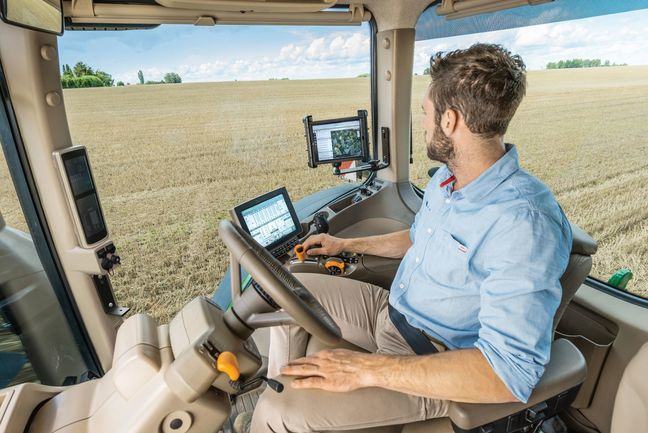 Today’s tractors are much more sophisticated than you might imagine. They have powerful engines – up to 450 horsepower in the case of the tractor pictured above – and are designed to be comfortable and quiet inside the cab. A suspension system and a seat designed with electrohydraulic technology ensure a smooth ride, even on bumpy ground. They also feature 360 degree LED illumination, a GPS receiver and touch-screen displays. 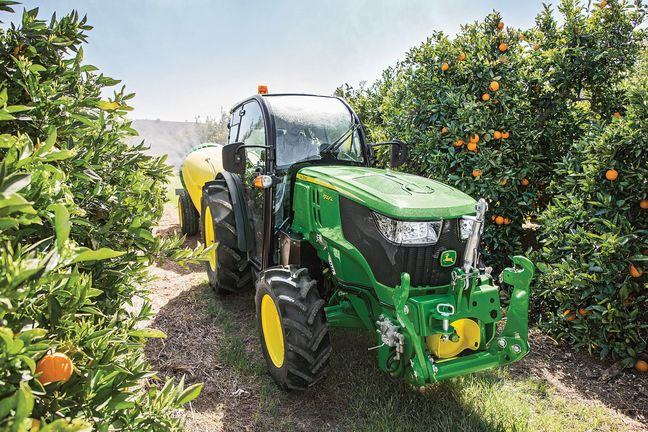 This tractor, which is spraying treatments onto orange trees, is an example of a machine used for specialty crop farming. Smaller tractors cause less soil compaction, use less fuel and are small enough to fit between narrow rows in orchards and vineyards. They are powerful but also versatile, meaning farmers can use them for a range of everyday tasks – spraying crops or transporting goods around the farm, for example. 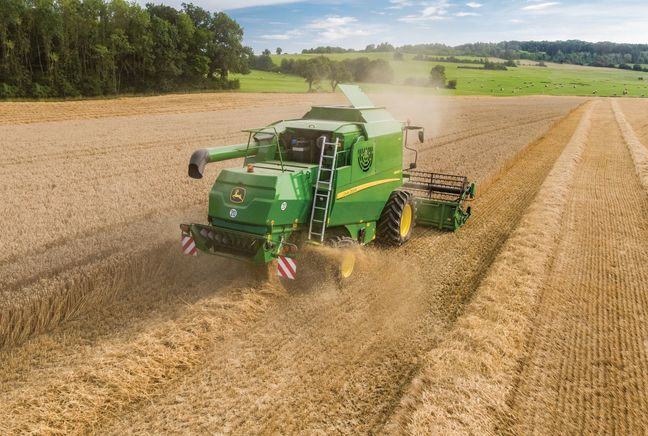 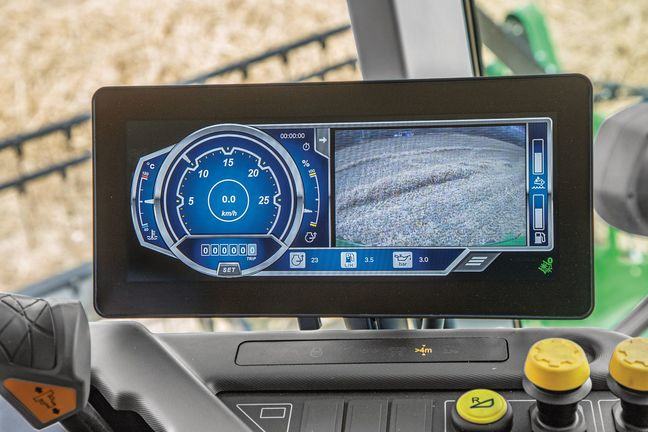 A display screen in a combine. Photo credit: John Deere

The combine harvester is used for harvesting grain crops. Its name comes from the fact it combines three tasks that were once performed separately: reaping (cutting crops), threshing (removing the edible part of the grain) and winnowing (separating the grain from its outer later, which is called the chaff). The first horse-drawn combine harvester was developed in the 19th century, but they’ve come a long way since then!

The first image above is an example of a smaller combine harvester. It’s designed to harvest the maximum amount of the crop with a minimal amount of damage or waste, and can quickly switch between different types of crop, making it versatile and efficient. In the second image you can see the combine’s display screen, which shows information about the engine and a camera image of the side of the combine to help with unloading. 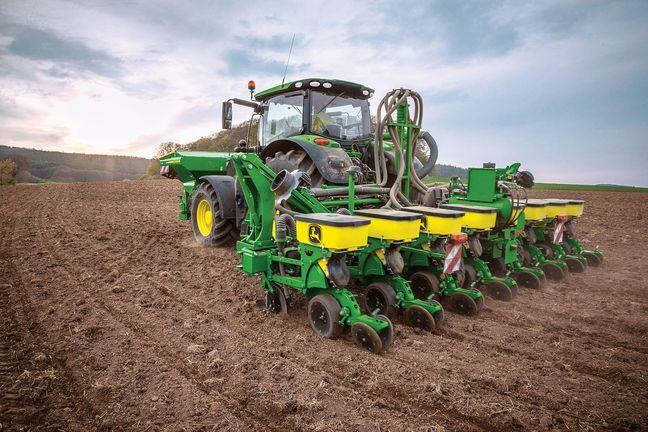 Planters are machines that sow crop seeds by evenly distributing them across the field at a specific depth. This is an important task because seeds need to be planted deeply enough to be protected from animals and birds, and far enough away from each other that the plants can get sufficient soil nutrients such as minerals and ions, water and sunlight.

The planter pictured above can plant seeds at speeds of up to 16 km/h while retaining accuracy. It has a brush belt that synchronises with the tractor’s ground speed to push seeds into the furrow without the seeds bouncing or rolling. The belt also contains a sensor which relays the spacing between seeds back to the operator, so they can check the quality of their planting as they go. 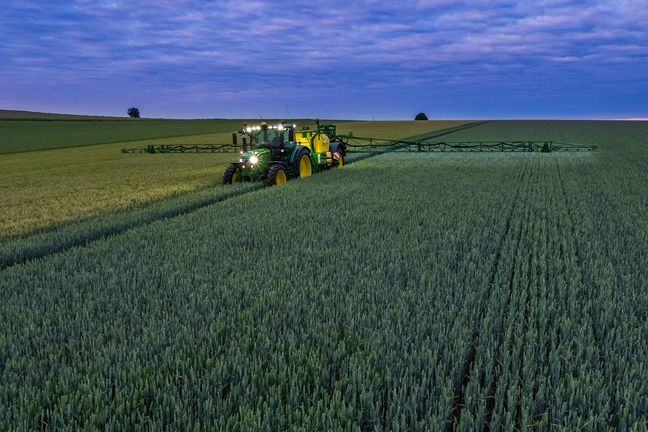 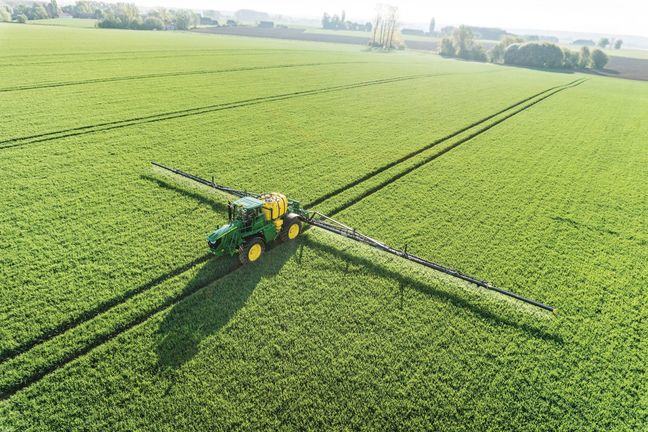 A sprayer is used to spray herbicides, pesticides or fertilisers onto crops.

The first image here is of a trailed sprayer attached to a tractor. The second is a self-propelled sprayer similar to a tractor itself. The long pipes extending either side containing nozzles are called the ‘spray booms’. Most spray booms are made of steel or aluminium, but more advanced booms use carbon fibre, which is stronger and lighter. Terrain sensors are used to automatically adjust the height of the spray boom to match the terrain. The tanks have a large capacity – up to 5,000 litres in the second sprayer pictured.

These sprayers apply treatments to the entire field, but later this week you’ll discover a new and more precise spraying machine that only targets weeds. 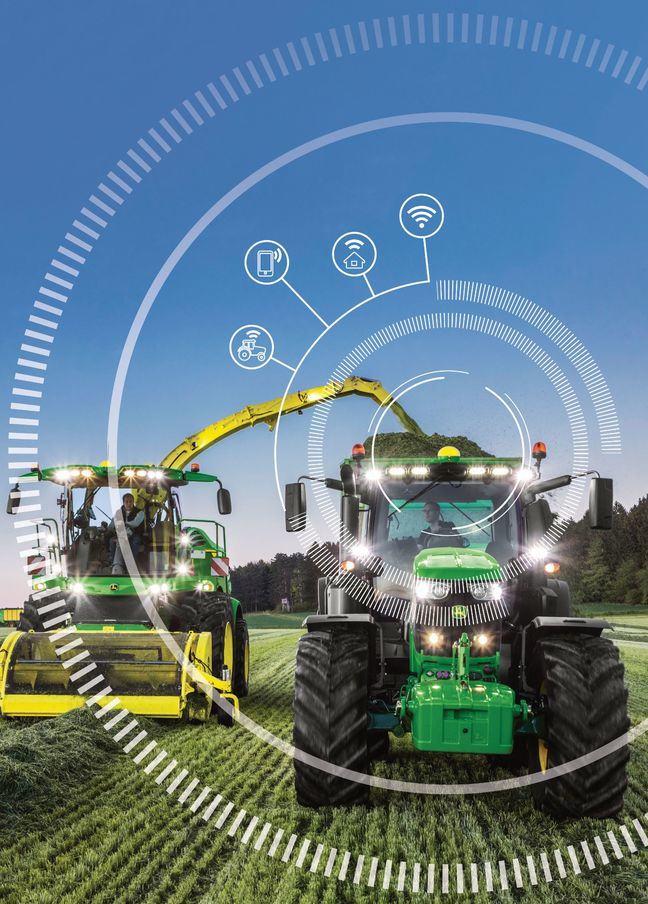 Today, many agricultural machines use wireless connectivity to transfer data between other machines and an operations centre. This gives farmers the bigger picture and helps them to make more accurate decisions about their crops. 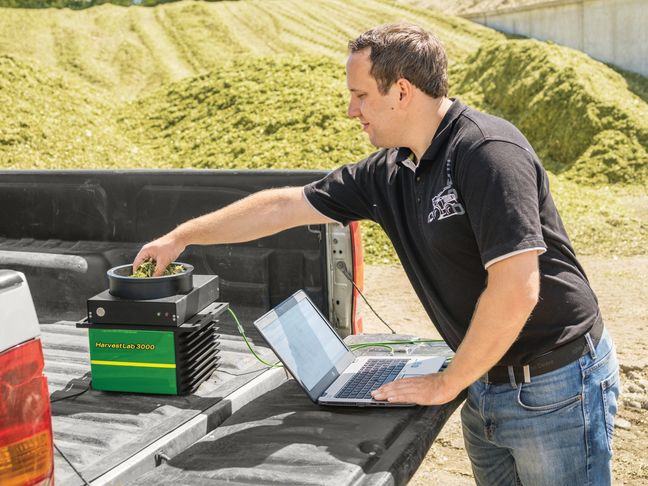 The sensor in the image above, called the HarvestLab 3000, is used to analyse various constituents within harvested crops such as protein, starch and fibre. It can take over 4,000 readings per second to produce highly accurate data. This helps farmers to adjust settings on their machines or make decisions about crop variety selection to produce better quality crops. 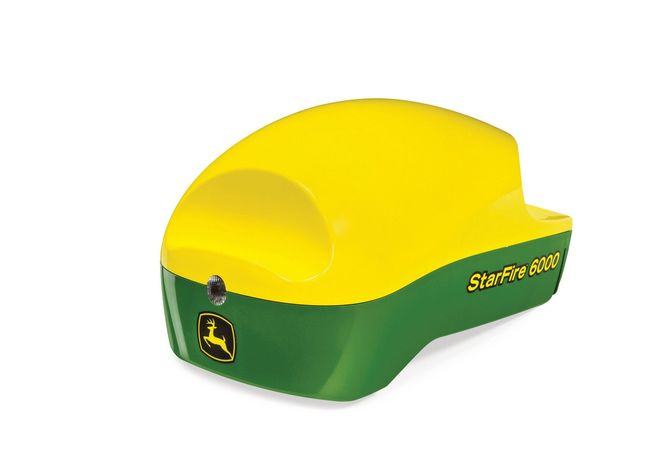 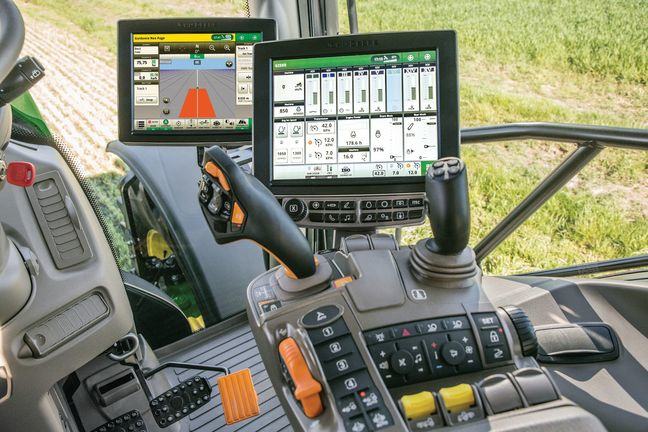 A touch-screen display in a tractor. Photo credit: John Deere

The StarFire 6000 receiver is an example of precision farming using GPS or other satellite systems like the Russian GLONASS or the European Galileo. With the help of several different correction systems this receiver can track the position of the machine with sub-inch accuracy. This signal can be used to steer the machines automatically, which increases productivity and reduces costs because of lower fuel costs and reduced fertiliser, seed and chemical use. Data gathered by the receiver is displayed on touch-screens installed in the tractors, so farmers can see what’s happening on their fields in real time.

These examples of AMS show that agricultural technology doesn’t only mean machines on fields. In fact, some technology doesn’t even need a field! To find out more about growing crops in urban areas, watch the video on vertical farming in the See Also section.

We would like to thank John Deere for providing us with examples of their agricultural machines to feature in this step.

© University of Cambridge and John Deere