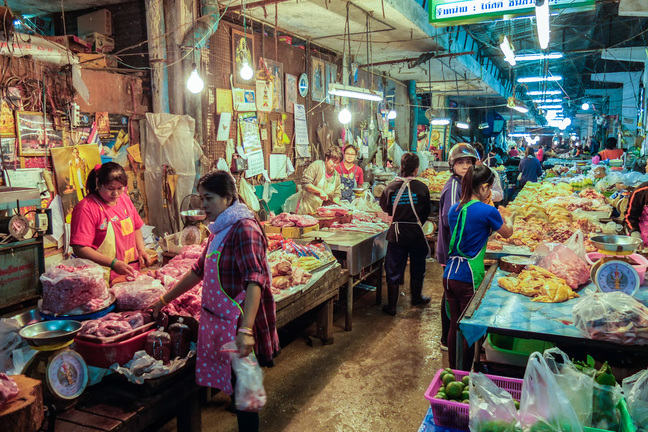 Now that we have laid the groundwork, it’s time to turn our attention to food systems and natural resources in Southeast Asia. In this article we start with some context on the demographics of Southeast Asia and the implications for food systems in the region.

The region of Southeast Asia includes 11 countries with an estimated 633 million people in 2015: Indonesia, the Philippines, Vietnam, Thailand, Myanmar, Malaysia, Cambodia, Lao People’s Democratic Republic, Singapore, Timor-Leste (East Timor), and Brunei Darussalam. The most populous countries are Indonesia (258 million people), the Philippines (101 million) and Vietnam (93 million), while the smallest are East Timor (1.2 million), and Brunei (423,000). In 2010–2015, the region’s population grew by an average of 1.2% per year, just slightly above the 1.18% world average, but below the 1.36% average for developing countries.

Incomes vary widely across the region. While GDP per capita in Singapore was US$52,900 in 2015, and in Brunei it was US$36,600, it is less than US$1,200 in Cambodia, Myanmar, and East Timor. While growth rates also vary – Brunei’s economy shrank for several years and averaged only 0.4% growth in 2010–2015, and Thailand’s economy has had several lean years as well – overall Southeast Asia is among the fastest-growing regions in the world, with GDP growth rates that are double and triple the global average, and far outpace most other developing countries. As you can see in the table below, with the exception of Brunei Darussalam, each country’s GDP is increasing much faster than it’s population, such that GDP per capita is increasing at a notable pace.

Demographics data for Southeast Asian nations. [Data from UN Department of Economic and Social Affairs (2014) and The World Bank (2016)].

A third key factor to consider is how rapidly Southeast Asia is urbanizing. Already, more than half the people in Indonesia and Thailand live in cities, as do three-quarters of Malaysians; overall, almost 48% of the region’s population lived in urban areas in 2015, and by 2030, that is expected to rise to 56%.

Southeast Asia’s rapid growth and urbanization have put it in the spotlight both economically and environmentally. These demographic changes, combined with economic trends, are reshaping food systems and putting natural resources under increased pressure. This is of particular concern because Southeast Asia is a terrestrial and marine biodiversity “hotspot”: even though it occupies just 3% of the world’s surface, it is home to about 20% of all plant, animal and marine species.

Increasing urbanization has a direct effect on the land available for agriculture, as residential and industrial/commercial areas occupy former farmland. As rural people move to cities, many send remittances to the countryside that can finance innovation, support improvements in farms and households, and enhance rural food security.

Most notably, urbanization affects agriculture by changing what people eat, and how they acquire it. Cities tend to offer a greater diversity of foods, including easy access to meat, dairy and convenience foods, which are more resource-intensive to produce and often less healthy than traditional plant-based diets. While rice is still the main staple in the region, rice consumption is declining relative to wheat. Meanwhile, the fact that urban dwellers tend to buy their food, not grow it themselves, expands market opportunities for food producers, but also requires a different approach to food ensuring security.