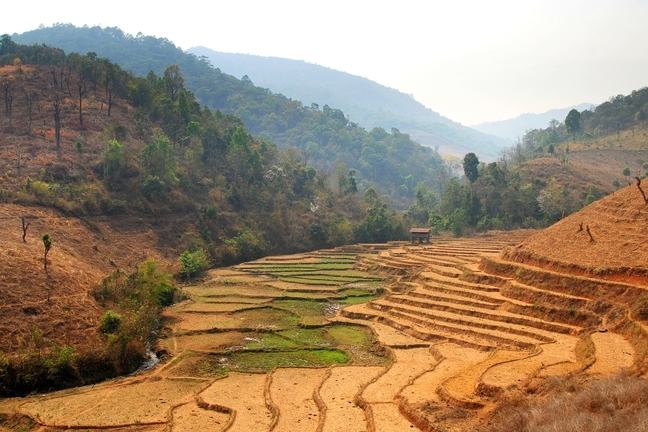 We have just heard Dr. Chu Thai Hoanh discuss some of the impacts of rice intensification, particularly on water quality and availability. This article presents a closer examination of the environmental impacts, as well as the relative resource productivity, of wet-season rainfed, wet-season irrigated, and dry-season irrigated rice production in Northeast Thailand.

Rice is the staple food of Southeast Asia. Thailand is the world’s sixth largest rice producer and number one exporter, growing rice on about 10 million hectares, more than half of it in the Northeast (Isaan). Isaan produces about 80% of Thailand’s Jasmine rice and other high-value varieties for domestic use and export. The vast majority is rainfed, grown only in the wet season; the rest is irrigated, with small amounts of dry-season production.

Overall, paddy irrigation uses 80% of freshwater extractions in Thailand, and pollution from pesticide runoff has become a major concern. Yet there are plans to expand irrigation in Isaan. To understand the implications of such plans, a recent study conducted a life-cycle analysis* of existing rice production, looking at both resource use and environmental impacts. Specifically the analysis measured energy use, freshwater use, and land use, as well as eutrophication and acidification of nearby water bodies, methane emissions (using a 100-year global warming potential), freshwater aquatic ecotoxicity, and ozone depletion.

Data were collected in 2010 from 45 diverse rice cropping systems in the Lam Sieo Yai Basin. The area has a tropical savannah climate, with a dry season that often features severe droughts, and a wet season between May and October. Rainfall varies greatly year to year; 2010 was very wet.

Although cropping practices were similar for all fields, they differed greatly in resource productivity and environmental impacts. The Rw system produced more rice per unit of labour, pesticides and total energy. Return on investment (mass of rice produced per production cost) was slightly higher in the Iw system than in the Rw system, and was lowest in the Id system. Land productivity ranged from 2,625 kg/ha in the Iw system to 2,375 in the Rw system, and 2,188 in the Id system. The amount of rice farmers needed to produce per 1 baht (~35THB = 1USD) of net income was 0.297 kg for Iw; 0.310 for Rw; and 0.662 kg for Id. In other words, Id was both the least-productive system, and by far the least profitable.

In terms of methane emissions, Iw showed the highest impact on a per-hectare basis, but Id rated higher on a rice-mass basis. In most other impact categories, Rw systems had lower impacts per hectare than Iw and Id systems, and Id had the highest impacts. However, acidification, ozone depletion and total water use (including “green” water) were about the same for all.

A key argument for expanding irrigation in Isaan is that rainfed systems force farmers to find alternative livelihoods in the dry season. From a societal perspective, expanding irrigation is a way to achieve higher production overall and discourage out-migration. Yet from farmers’ point of view, dry-season irrigated rice involves more inputs, higher costs and labour, at a time when there is also scarce labour and rural livelihoods are diversifying. From an environmental perspective, dry-season production is clearly not the best option.

*A life-cycle analysis is a systematic method for quantifying the emissions, resources used, and environmental and health impacts associated with the production and use of goods and services.