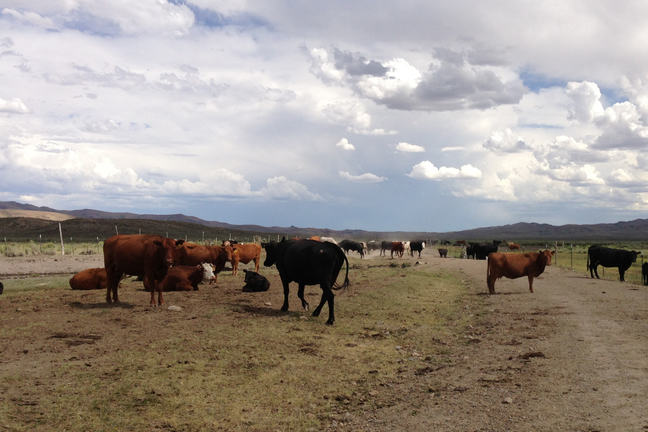 Efficient resource use: A focus on livestock

In any given location, both land and water are finite resources. Even if there is undeveloped land that could still be cleared and cultivated, doing so would release carbon into the atmosphere and reduce biodiversity. Water availability in many places is becoming more and more unpredictable, as precipitation patterns are disrupted and aquifers dry up or are affected by saltwater intrusion. Therefore, many food system researchers agree that future food production should be confined to existing agricultural land, and make much more efficient use of water.

Livestock-rearing uses 70% of the world’s agricultural land. Aquaculture’s share of land has not been estimated, but it only uses about 4% of all feed crops, and minimal land for ponds and such, so the overall figure is likely to be low. But it doesn’t just matter how much land is used, but also how it is used, the impacts of animal-rearing, the knock-on effects for land elsewhere, and what else would be done with the land instead of animal farming.

The use of land for livestock causes both direct and indirect land use change: direct where land is cleared for grazing or to produce feed crops, and indirect when land used for a different purpose is reallocated to animal grazing or feed production, and that shifts the original activity onto uncultivated land. These effects vary by animal type and production system. While deforesting land for livestock is certainly harmful, the effects of shifting land that is already in cultivation to livestock can vary greatly.

Poor management and overgrazing can cause soil degradation, organic carbon losses and nutrient pollution. But some studies suggest that certain grazing regimes can even increase soil carbon uptake; further research is needed. Extensive grazing systems can also play an important role in maintaining the biodiversity and ecological character of many regions. In traditional mixed crop-livestock systems, manure plays an important role in maintaining soil fertility as well.

Monogastric species (e.g. pigs and chickens) require far less land than grazing ruminants, but producing their feed requires more high-quality land. The same is true of intensively reared ruminants (such as industrial cattle farms), which is why from the perspective of arable land use, they arguably have the worst impact and because of their metabolism, they produce far more greenhouse gas emissions than monogastrics.

Although aquaculture uses very little land, poorly designed farms can cause disproportionate damage if situated in ecologically vulnerable areas such as wetlands. For example, commercial aquaculture has greatly contributed to the loss of mangroves; one study found that since the 1970s, commercial aquaculture has accounted for 54% of all mangrove loss in eight countries. Other studies, however, point to a much broader range of drivers for mangrove deterioration and loss.

Animals use water directly, for drinking, washing and, in aquaculture, as their living medium. They also use large amounts of water indirectly by consuming feed that need water to grow. Growth in the livestock sector will increase water demand and could exacerbate water scarcity. Meat production has been widely criticized for its “thirstiness”, with sometimes very high numbers cited that include rain falling on pasture. Actual water use varies substantially. In some contexts, such as in sub-Saharan Africa, livestock water use compares favourably with that of crops, since animals can eat scrubby rainfed plants in areas where growing crops is infeasible. However, as animal production systems intensify, they depend more and more on irrigation for feed production.

Intensive aquaculture systems may use large volumes of water, but they release it again after use. When nutrients are added to the water, this may increase or decrease its reuse value. If the water is used for irrigation, the extra nutrients might reduce the need for fertilizer, but if it is used for domestic supply, then the nutrients may need to be removed. Unfed filter-feeding or waste-consuming species (such as oysters), by contrast, remove nutrients from the water, and in some contexts, can be environmentally beneficial. Well-planned ponds can also capture and store run-off water and thus improve the productivity of the wider agricultural system. Such development may be of particular value in marginal, highly seasonal subtropical zones and for rainfed landscapes.