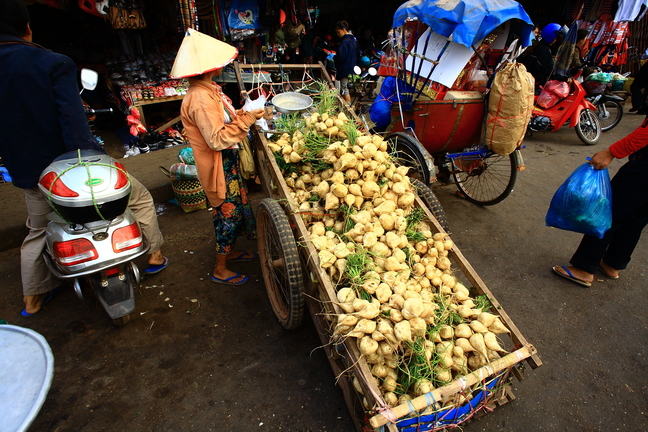 A vendor in Laos

We saw in Introducing the food systems concept that thinking about the various actors involved in different activities along the food chain is key to a food systems approach. Here we will look in more detail at the main types of actors in food systems, their roles, and the institutional arrangements that influence and guide their behaviours.

Food system actors are arguably the largest group of natural resource managers in the world. Collectively, they create the sustainability problems we face, but are also critical to solving them. Some need to be empowered to effect change; others will need incentives to alter their behaviour.

The global community of farmers and fishermen is very diverse. In many low- and middle-income countries, small-scale farmers and fishermen still predominate in rural areas. Small farms, typically family-run, with women doing much of the work, account for at least 56% of global agricultural production. Small-scale fisheries also play an important role in food production; worldwide, more than 120 million people depend directly on fisheries-related activities. By contrast, in more developed countries, food production is dominated by large, specialized farms.

For several reasons, most notably poverty, many smallholders have not been able to increase their land and labour productivity. They lack adequate infrastructure and have limited access to key inputs such as knowledge and technology, feed, fertilizers, seeds and capital; and/or market opportunity. With the right support, smallholders can increase productivity while regenerating or preserving natural resources.

Access to natural resources is crucial for farmers and fishermen. As shown in the table, there are four main types of property rights and tenure regimes: private, common, state and open access, with different implications for sustainability, resource efficiency and environmental impacts (see table).

The social, cultural and economic environment is crucial for farmers as well. Subsistence farmers grow a variety of crops and depend on them for their food supply, even if they also sell the surplus. Commercial farmers, meanwhile, tend to specialize in one or a few crops, and depend on prices of inputs, labour and produced commodities, as well as on credit facilities. The companies to which they sell their crops exert large influence over these farmers’ activities.

Consumers help shape food production through their buying choices, though this demand is strongly influenced by food availability and income as well as by the “food environment” – the physical, social and economic surroundings that influence what people eat. Consumers also have a voice as citizens, who vote, express opinions, and sometimes organize themselves in NGOs.

Consumers are a very diverse group, ranging from rural poor, to urban poor and urban rich. In developing countries, the growing middle class is playing a key role in changing food consumption patterns. Overall, socioeconomic conditions are an important factor in changes of food demand and dietary patterns. Culture, tradition and religion play a major role as well.

The “food environment” is particularly influential in urban settings. Food companies, restaurants, food vendors and retailers actively shape the environment to drive consumer choices. One consequence has been the rise in ultra-processed foods, which are often rich in sugars, fat and salt, are cheap to produce and profitable to sell, and contribute to poor health. Changing this food environment could be an important lever towards dietary change and reducing food waste.

A wide variety of people and businesses process, package, prepare and sell food for consumers. The large food companies and retailers attract most of the attention, but there are also many small and mid-sized enterprises. Together they make up the largest economic sector in many regions, such as the European Union. Some operate mainly at a local level, while others are global, some with well-known brand names.

In many countries, the environmental costs (externalities) of the food system are not included in food prices. Governments could minimize negative externalities through environmental regulations and standards. Financial incentives could also promote a shift to more sustainable practices.

Non-governmental and other civil society actors

There are many civil society groups actively engaged in the area of food systems and natural resources, at both the local and global levels. Some have more socio-economic goals (e.g. strengthening the position of smallholders or women), others are more concerned with health or the environment.

NGOs sometimes have a large role in initiating changes in food systems and can help shape public policy. NGOs also influence the behaviour of companies, especially large multinationals by a variety of strategies, ranging from cooperation and mutual support to “naming and shaming”.

As we move through the weeks of the course building towards Week 5: Towards sustainable food systems, keep in mind that the first step in identifying ways to improve our food systems is to understand the key players, their motivations, and the context in which they operate.