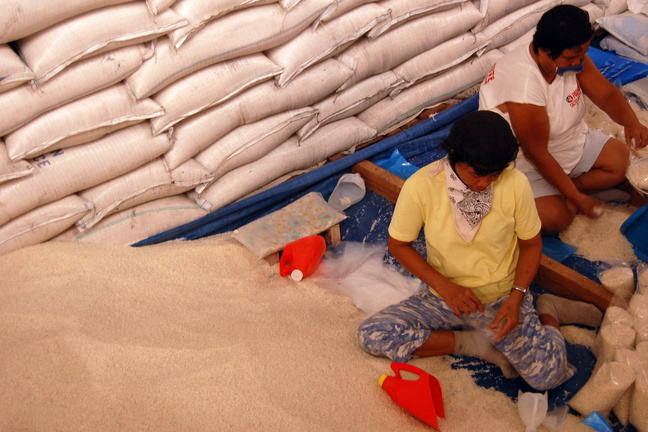 Workers packing rice in a warehouse in Cabanatuan city, the Philippines, by Schubert Ciencia / CC BY 2.0

Behavioural choices in a food crisis

One of the challenges to food security is achieving stability. In this article we look at why world rice markets are particularly volatile, using the 2007–08 food crisis to illustrate how hoarding behaviours can cause prices to soar, and how prices can be stabilized again.

Instability of food prices, especially of staple foods, can have a significant impact on people’s perceptions of their food security. Price spikes are deeply harmful to the poor, and can raise people’s concerns about markets and trade.

The world rice market is particularly volatile, with greater price variations over several decades than we see for maize or wheat. This is partly due to the fact that both importers and exporters use the world rice market to stabilize prices in their own countries by disposing of surpluses or closing deficits through imports. This means that in addition to changes in production costs and consumer preferences, rice supply and demand are notably influenced by the political decisions of governments. Rice is a very political commodity.

However, volatility in rice prices is also driven by the way in which rice is produced, marketed and consumed in most Asian countries. Instead of the large commercial entities that dominate the maize and wheat markets, the rice market involves hundreds of millions of small farmers, millions of traders, processors and retailers, and billions of individual consumers. These people may decide how much rice to grow, sell, store and consume based on their price expectations, among other needs. Yet, many actors have only limited data to consider when making these decisions.

Combine the rice market’s unusual market structure with the political dimensions, and it is easy to see why prices are so unstable. Expectations about shifts in prices can lead millions of consumers and producers to behave in a speculative manner that can lead to price destabilization.

In a commodity market such as cocoa or wheat, in which virtually all the product in storage is held by commercial enterprises, the key factors affecting prices and market actors’ behaviour can be predicted fairly well by economic models. With rice, however, stock levels can change at any level of the supply chain, and market actors – farmers, traders, consumers and politicians – may rely more on short-term thinking.

For example, in 2007, amid growing concerns that world food supplies were limited and prices for wheat, maize, and vegetable oils were rising, several Asian countries started storing rice. Fears of shortages spread, and with those fears, prices increased rapidly. At the start of 2008, rice in Thailand cost US$375 per metric ton (mt). On 28 March 2008, the price jumped by US$75; in April, it reached more than US$1,100 per mt.

As apprehension spread, governments tried to stabilize rice prices within their borders. Some governments banned or greatly restricted the export of rice. This was classic hoarding behaviour. Millions of consumers, farmers and traders became concerned, driving up demand for rice. In April 2008, amid a panic, rice sold out in Vietnam’s most populous city in two days.

Hoarding can have a big impact. If households just doubled the amount of rice stored in their pantries, they could drive up short-run demand by 25%, and the world price would have to rise by more than 150% to rebalance the rice market. That is what happened in the rice market panic event of 2008. Fortunately, the upward spiral in prices can end quickly when one or two major actors reverse their behaviour in a manner that quickly changes the expectations of producers and consumers.

In June 2008, after considerable international urging, the Japanese government announced that it would sell 300,000 tonnes of its surplus rice stocks to the Philippines. Global prices started to fall thereafter. By late August, medium-quality rice from Vietnam was available for half its late-April price.

In this article, we explored the relationship between the rice market and food security, by looking through the lens of the 2007-08 food crisis which was characterized by price volatility.

Should volatile food prices be stabilized? If so, by who or what? Should it be done by the government, the market, or through other means? How can we ensure food security (e.g. access, supply and affordability), while also supporting smallholders in developing countries?

Image Source: “Workers packing rice in a warehouse in Cabanatuan city, the Philippines” by Schubert Ciencia / CC BY 2.0