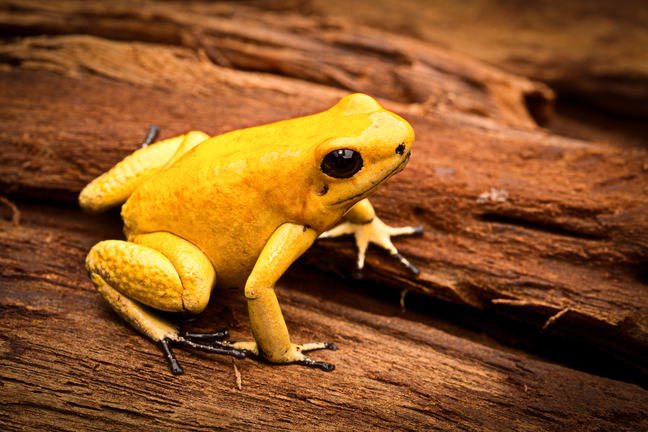 The endangered Golden Poison Dart Frog, by Lwp Kommunikáció / CC BY 2.0. Frogs and other amphibians are going extinct at an alarming rate.

We have named biodiversity and ecosystem services as natural resources essential for food systems. Biodiversity, defined as the variety and variability of animals, plants and microorganisms at the genetic, species and ecosystem levels, is particularly vital for food production, but food system activities are having an alarming impact on biodiversity, with many thousands of species threatened or already extinct.

Human activities affect biodiversity in many ways, but food systems do so in three main ways:

As Michael Pollan explains in his book The Botany of Desire, for example, human tastes have made the apple one of the most successful plants on the planet. But the success of favoured species – or even varieties, as we’ve seen with potatoes, bananas and other crops – can come at the expense of others, even driving them to extinction.

Five times in Earth’s history, we know there has been a catastrophic loss of biodiversity, with only a fraction of species surviving to repopulate and diversify the planet over millions of years. We call these the great extinctions. There is a growing debate on whether humans are now causing the “Sixth Great Extinction”.

But why does it matter if a species goes extinct? Species interact in complex ways within ecosystems, and sometimes we do not grasp the importance of a single species until it is gone. Moreover, ecosystems generally have several ‘keystone species’, which are species that are pivotal to maintaining a balanced ecosystem, the removal of which will greatly disrupt ecosystem functioning. These disruptions in ecosystems can have cascading effects, eventually crossing a tipping point and shifting the identity of the system. We will learn more about these dramatic effects in a discussion still to come this week.

Consider the infographic below and tell us your reflections on the impacts that human diets and lifestyles have had on the biodiversity and viability of species on Earth.

Williams, M. et al. (2016). The Anthropocene: a conspicuous stratigraphical signal of anthropogenic changes in production and consumption across the biosphere. Earth’s Future, 4, pp.34–53.

Image Source: “The endangered Golden Poison Dart Frog, endemic to a small plot of rain forest on the Pacific coast of Colombia” by Lwp Kommunikáció / CC BY 2.0