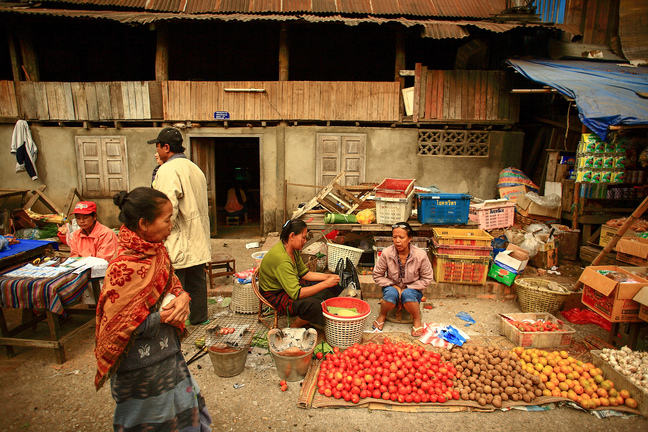 A market in Laos

In this activity we will take a closer look at food-related livelihoods in Southeast Asia, particularly through a gender lens. We begin with this article to trace the evolution of the sustainable livelihoods approach in rural development research and practice, and identify areas for improvement on knowledge, politics, scale, and long-term change.

The “livelihoods approach” has been one of the most influential concepts in rural development in the past two decades. While definitions vary, the common starting point is to focus on how different people in a given place make a living, which often includes multiple activities.

For example, a family may have a small farm and grow much of its own food, but also sell produce and crafts at a local market, and engage in wage labour part-time or seasonally. Over time, they will face shocks and changes and need to cope, adapt and even transform their livelihoods. The resources they have at their disposal – natural, financial, social, cultural, political – play a critical role as well. A recognition of diversity is a key aspect of livelihoods approaches, which directly challenge single-sector approaches to rural development, and focus on understanding local perspectives, in all their complexity.

The livelihoods approach was first defined by Chambers and Conway (1992) in an influential paper that strongly criticised “reductionist” development approaches that focused narrowly on food production, job creation, and lifting people above poverty lines. Such approaches impose an industrialized-country perspective and belie rural realities, the authors argued. Instead, they proposed a new way of thinking about rural livelihoods:

A livelihood comprises people, their capabilities and their means of living, including food, income and assets. Tangible assets are resources and stores, and intangible assets are claims and access. A livelihood is environmentally sustainable when it maintains or enhances the local and global assets on which livelihoods depend, and has net beneficial effects on other livelihoods. A livelihood is socially sustainable when it can cope with and recover from stress and shocks, and provide for future generations.

While some rural development researchers had taken similar approaches over the decades, they were far from the norm; instead, modernization was central to rural development policy and research, with economists dominating the discussion, and agricultural productivity taking priority. In the late 1980s and early 1990s, a new “sustainable development” agenda emerged that combined poverty reduction and livelihoods with growing concerns about environmental sustainability. At first, top-down and market-oriented solutions continued to dominate, but in the late 1990s and 2000s, as opposition grew to neoliberal policies, the livelihoods approach offered an appealing alternative. The UK government in particular embraced it, making promotion of “sustainable rural livelihoods” its priority.

Yet much of the ensuing research and analysis emphasized economics as well. For example, the sustainable livelihoods framework, published in 1998, emphasized the economic attributes of livelihoods as mediated by social-institutional processes, linking inputs (“capitals” or “assets”) with outputs (livelihood strategies), resulting in outcomes related to poverty, well-being and sustainability.

Assessing the impact of this work in 2009, Ian Scoones, a leading thinker on livelihoods approaches, notes that it has “lost both the political and financial momentum of being at the centre of influence”, but it did make a difference, changing how aid was spent, bringing in new skill sets, and fostering debate across disciplines and between academics and practitioners.

Livelihoods approaches still have much to contribute to rural development research and practice, Scoones argues, but they need to be improved in crucial ways. Specifically, they need more rigorous political analysis, to focus on:

This new livelihoods agenda, Scoones stresses, does not mean abandoning a commitment to place-based research focused on poor people’s perspectives, but rather it is a way to “rethink, re-tool and re-engage”, drawing on other areas of research. It re-energizes the livelihoods approach by building on two key insights: a recognition of cross-scale dynamic change, and heightened attention to knowledge, power, values and political change.

Scoones, I. (2009). Livelihoods perspectives and rural development. The Journal of Peasant Studies , 36(1).