This content is taken from the The University of Edinburgh's online course, Football: More than a Game. Join the course to learn more.
View course
4.5 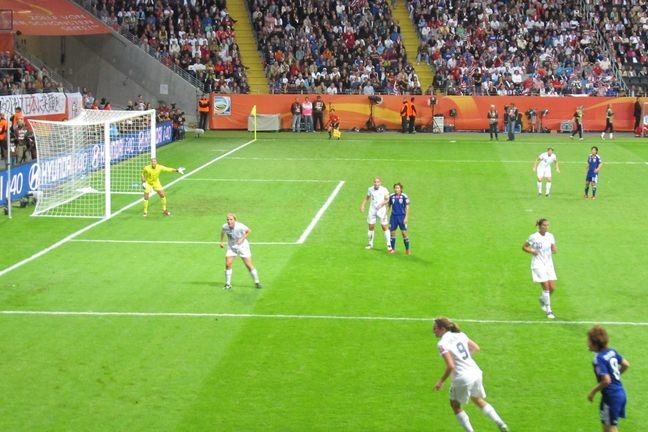 Action at a World Cup match

According to FIFA there are 29 million women and girls playing football worldwide and the aim is facilitate 60 million by 2026.

Women’s football is rapidly growing around the world, but whilst the numbers are important, it is also interesting to look beyond these statistics to the reasons why Women’s football is expanding so rapidly. Similarly, the consequences of a growing game raise important questions concerning the governance of the game and whether women are adequately represented in leadership positions across the sport. Let’s begin by looking at the growth of women’s football in Europe specifically, before discussing the Women’s World Cup.

What do I need to do?

Participation in women’s football in Europe 2014

In Europe alone, data provided by UEFA noted the following for the season 2013-14:

Participation in women’s football in Europe 2017

You can compare and contrast growth and change between 2014 and 2017 by using the date below for 2017. The data provided by all national associations via an annual women’s football survey, and is supplemented with UEFA Grassroots Charter data collected in June 2017.

The figures in the report bear witness to the growth in women’s football throughout Europe:

As of January 2016, only two of the 209 Presidents of the Member Associations of FIFA were women.

Growth of women’s football in Europe

As the number of registered players increases, so do the resources dedicated to women’s football. The total amount of money invested in the sport is almost three times higher than it was in the 2012-13 season. Indeed, all of the figures for women’s football are higher for the 2013-14 season than they were for the 2012-13 season, which supports the notion that there has been progress within women’s football in Europe. It should be noted that one additional national association (Gibraltar) has joined UEFA, which may affect these figures to a certain extent.

In the UK, England has played a major role with its new ‘Game Changer’ strategy, which seeks to increase investment and attract more funding for women’s football.

The first FIFA Women’s World Championship was held in the People’s Republic of China (PRC) in 1991, fulfilling a pledge made by then FIFA President João Havelange at the 1986 FIFA Congress in Mexico City. The US women took the new trophy and set new standards for their female colleagues around the world. The next iterations of the FIFA flagship competition for women were held in Sweden (1995), the USA (1999 and 2003), PRC (2007), Germany (2011), Canada (2015) and France (2019).

In 2015, the women’s tournament was hosted from 6 June to 5 July by Canada, who won the right to host the event in March 2011. The 2019 event in France was the eighth FIFA Women’s World Cup, as the women’s football world championship tournament is a quadrennial international event.

The 2015 event was not without its controversies, most notably in the lead up to the tournament when a number of players filed a lawsuit against FIFA’s ruling that the tournament would be played on artificial turf, and not the traditional grass that the men’s tournament is played on.

Some of the top women players refused to play in the 2019 event as they were involved in equal pay lawsuits with their home associations.

Australia recently announced that in % terms it would equalise pay between the men and women’s international teams in Australia? What other countries do this?

In January 2020, the USA led the world rankings in women’s football with Germany in second, followed by Netherlands, France and England.

North and South Korea are both in the top 20.

England, Australia and Netherlands have all progressed up and France, Canada, Japan, Brazil and Sweden have all fallen slightly.

The USA went back to the top of the FIFA rankings after winning the 2019 FIFA World Cup.

If you aggregate the top men and women’s ranked countries together who would come out as the top football nation?

We do not claim to have the most up to date figures here but [ please tell us more from what you have found out from more recent surveys of women’s football. Remember the key thing is to be able to use data to explain trends.

You can see the most up-to-date rankings by clicking on the link below.

Where are we now?

Both FIFA and UEFA have published recent strategies aimed at growing the game of football for women and girls.

FIFA published a report dated 9 October 2018 and entitled “Women’s Football Strategy”, initiating a strategy for the growth of women’s football with the aim of communicating and marketing the game more effectively.

In October 2018, UEFA also announced7 its own measures to support the growth of women’s football. This included increasing its financial support. Under the UEFA HatTrick assistance programme, which distributes funds to its 55 federations for approved projects, the UEFA women’s football development program (WFDP) will increase its funding to each federation by 50%, from 100,000 to 150,000 Euros.

What is happening in your country to support the growth of one of the fastest growing team games in the world - women’s football?

We now progress to the video by Dr Gray, before discussing ways to challenge gender stereotypes.