This content is taken from the Durham University's online course, Forensic Archaeology and Anthropology. Join the course to learn more.
View course
1.7 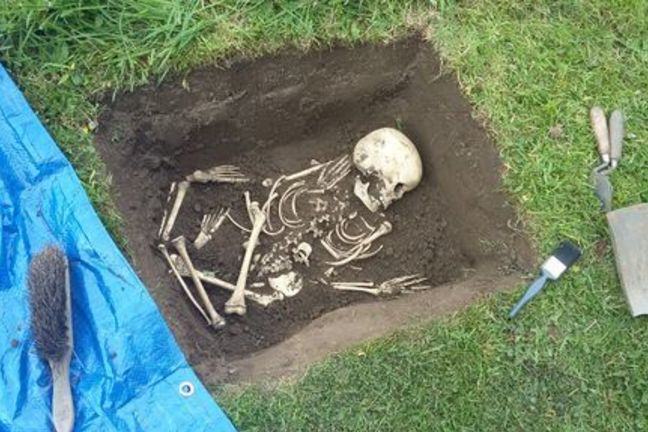 Four key stages of decomposition are discussed below. Hypostasis, Algor Mortis and Rigor Mortis all occur as a result of normal biological functions stopping – particularly the cessation of blood flow and the cooling of the body. Putrefaction is the result of the spread of bacteria out of the gut and around the body. It causes swelling/bloating and is a key cause of the destruction of the soft tissue structures. The timelines for each phase below vary and should only be used as a very approximate indicator of the amount of time that has elapsed since death.

This occurs within an hour to several hours after death. The blood vessels collapse. Pooling of blood due to gravity can occur but will leave white gaps at pressure areas. Regurgitation of gastric contents can occur, as can the emission of semen.

This is the most useful indicator for estimating time of death in the first 24 hours. The body follows Newton’s Law of Cooling: the rate of cooling is proportional to the difference in temperature between the body surface and surrounding environment.

This refers to the destruction of soft tissues by bacterial action. It will usually occur 2-3 weeks after death.

Archaeologists can help to establish the PMI because they can interpret factors relating to the depositional context of the body and its relationship with other features in the environment. For example, if the grave cuts through a sewerage pipe that the police know was dug in November 1983 and then a patio was built on top of the grave in April 1986, we know that the grave was dug sometime between November 1983 and April 1986. In this example, the sewerage pipe provides what is referred to as a terminus post quem (the earliest date that the body could have been deposited) while the patio provides the terminus ante quem (the latest date that the body could have been deposited). A famous example of a terminus ante quem is the eruption of Vesuvius in AD 79. Everything buried under the resulting ash layer must have been present prior to the eruption.

Decomposition can be heavily influenced by an enormous number of variables referred to as taphonomic factors. These factors can speed up or slow down the decomposition process. For example, heat and insect activity will speed up the process, while cold temperatures or wrapping a body in plastic will slow it down. For buried human bodies, the acidity or alkalinity of the soil is also an important factor influencing bone preservation. Other factors such as whether the body was burned (cremated), or deposited in water will also have an impact. We will discuss these factors in a little more detail next week.

Individuals killed during periods of conflict are often buried in mass graves. The presence of multiple bodies within a single grave will also affect rates of decomposition. Bodies deposited at the same time within a mass grave will also decompose at different rates depending on their position within the grave and in relation to adjacent bodies. We will discuss the complexities of dealing with commingled deposits in Week 6.

Given all of these variables, it is therefore often very difficult to say with confidence how long the soft tissues will take to decompose after death. There is also a debate about the most useful way to calculate the actual figure for time since death. Regardless, you can’t just look at a skeleton/decomposed body and provide a PMI.

When the soft tissues of the body are partially or fully decomposed, the person can no longer be recognised by family members. Identification of the dead person must then be carried out using scientific methods. These methods will be discussed in more detail in Week 3.

A final point to note is that it’s very difficult to ‘get rid’ of a body without a trace. They don’t simply dissolve in the ground. To read more about this see our short article The Human Body Never Truly Disappears.