Once the likely grave site has been identified, the surrounding vegetation should be systematically investigated for associated items (e.g personal effects, bullets, weapons). These items should be bagged, recorded and mapped, as the precise locations may be relevant for interpreting the scene. The site should then be cleared and the topsoil removed to expose the edges of the grave cut. Excavation is destructive and it is therefore crucial to proceed using established archaeological techniques.

Detailed recording is essential throughout the excavation process to ensure that stratigraphic and spatial relationships/associations can be later reconstructed using site archives. If an item is removed from the site without being properly recorded then it loses its evidential integrity. Excavation must be conducted by trained archaeologists working alongside forensic experts. A forensic anthropologist should also be on site, as well as experts to retrieve any environmental and trace evidence.

Health and safety on site and in the field is also a key concern. As well as basic concerns regarding working in proximity to heavy machinery, at some previous conflicts there has been a concern that graves, and even the bodies, were booby trapped with incendiary devices. Explosive detecting dogs may therefore be used to investigate a site for bombs prior to clearance and excavation. Remember also that the exhumation of human remains is often contentious and in post-conflict situations can be highly political. Not everyone will be happy that bodies are being exhumed and the forensic investigators may require protection from hostile parties.

The edges of the grave should be demarcated and a site plan created using a GPS to plot the graves in relation to other features on the landscape. Note that the edge of a grave cut is not always obvious and the grave fill may differ very subtly in terms of soil colour and texture from the surrounding soil. When a hole is dug it may penetrate through several slightly different soil layers. These then become mixed in the grave fill such that it is slightly different in texture and colour when compared to the surrounding soil (see below).

Excavation of a mass grave may proceed initially with the aid of a highly skilled mechanical digger operator working alongside an archaeologist. A single grave cut can be tackled by hand. Once signs of bodies or personal effects start to appear, excavations proceed using hand-held tools (e.g. mattocks, spades, trowels). It is important to use the correct tools and to be careful not to damage the remains. 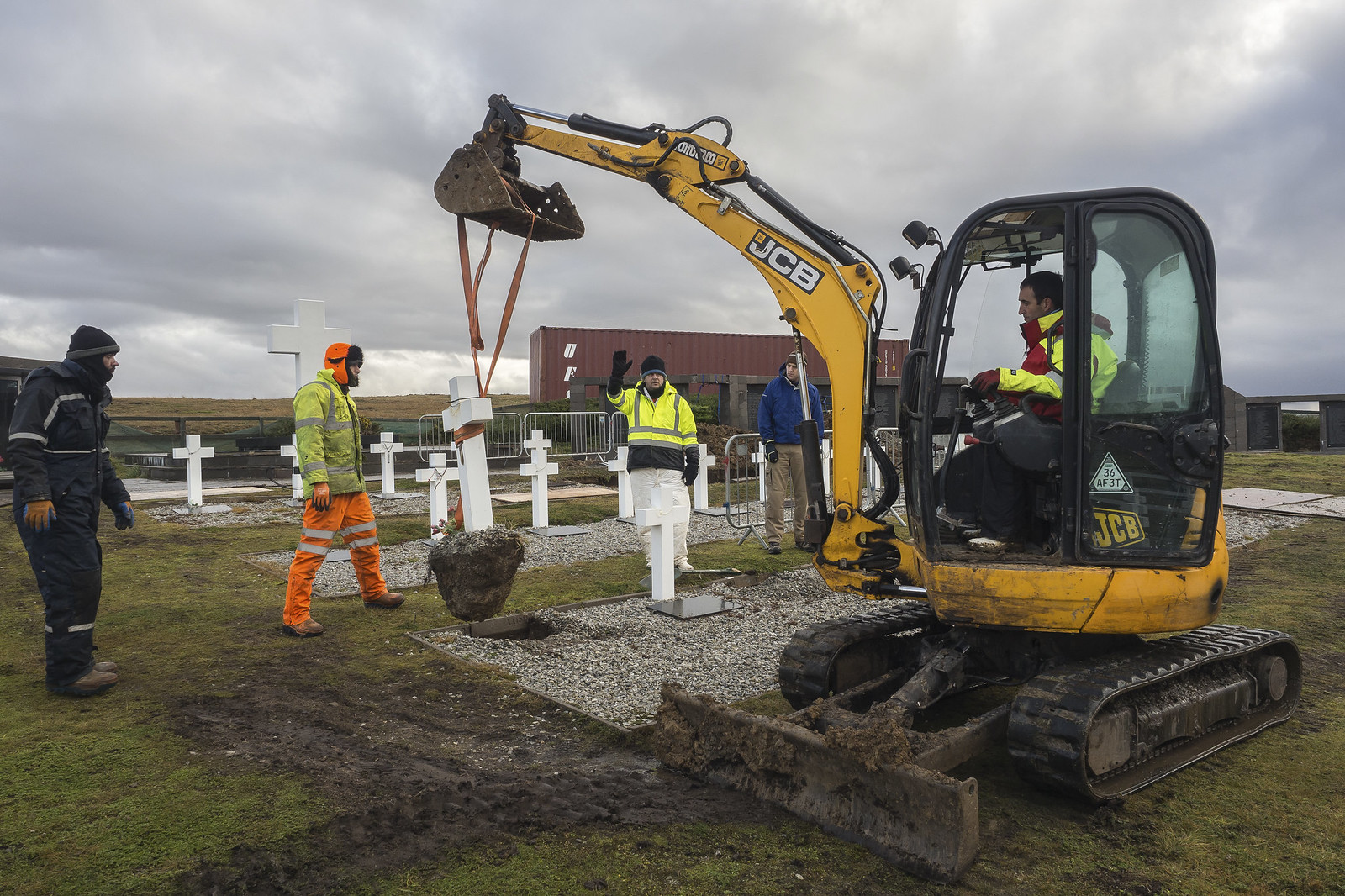 Near Darwin, Argentine military cemetery. Immediately after forensic examination, bodies are placed in a new coffin and reburied at the same place where they had rested for 35 years. The remains and their resting places are treated with utmost care and dignity throughout the operation. (Photographer Didier Revol, Copyright ICRC).

An archaeologist describes how to carefully excavate a body from a grave.

Photographs should be taken throughout excavation from a consistent point

A forensic anthropologist take a picture of a grave site.

No body or grave?

It should be noted that there is the possibility that the survey data indicating that the area was a potential grave-site was incorrect. These techniques are not infallible and it’s possible to mistake features such as tree roots, or other human-made features for grave cuts. Whether the site is a grave or not can only be determined through excavation, which is time-consuming and expensive. For example, a large proportion of the budget allocated to the Committee on Missing Persons in Cyprus to locate those missing from the conflict in the 60’s and 70’s is spent on archaeological excavation. As is sometimes the case, a number of these excavations did not recover human remains. Nonetheless, they do at least serve to rule out an area as a possible grave-site. This was also the case in the investigation of a missing person in Scotland. The individual had gone missing decades earlier, but the body was never found. Acting on witness testimony, the police excavated a quarry, which had been open at the time the person had gone missing, but had since been back-filled and had a forest planted on it. This was a massive operation to cut down the trees and excavate the quarry. Forensic archaeologists and anthropologists worked on the site alongside the police, but ultimately no body was recovered. Despite not recovering any evidence, the work did rule the site out as a burial location and put an end to the persistent speculation that the body was there. More recent excavations in a different quarry have also not recovered the remains, however suspects have been charged.

After a grave site and its surroundings have been identified, recorded and photographed, the body itself must be excavated. In the next article, we will discuss several basic guidelines to follow when excavating a body. For more in depth information there are several accessible field guides available. Many of these are written from an archaeological perspective, but similar considerations apply. For example, the A Field Guide for the Excavation of Inhumated Remains provides a lot of useful information.