This content is taken from the Durham University's online course, Forensic Archaeology and Anthropology. Join the course to learn more.
View course
5.3 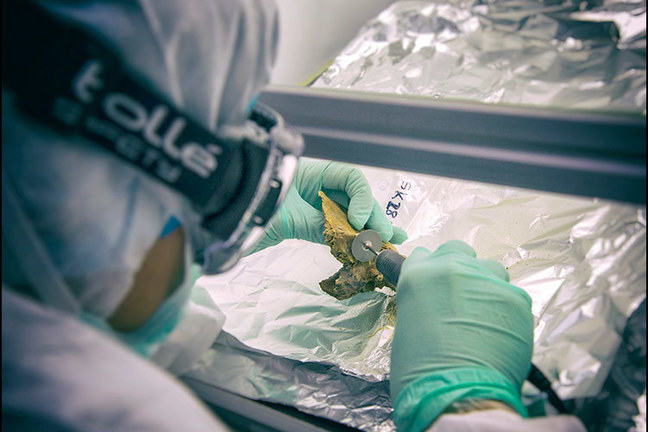 What bones should be sampled? Teeth and bones are the most environmentally resistant human tissues, and they can survive, even for millennia, when the soft tissues are long gone. As bones and teeth are biological tissues, they will contain cells from which the DNA can be extracted.

The sampling strategy varies depending on the age and environmental degradation of the skeleton. In forensic contexts, research has shown that long bones such as the femur or tibia retain more DNA than skeletal elements with a higher proportion of trabecular bone, such as the skull, ribs or vertebrae.

When much older or very degraded samples are studied, more diagenetically resistant tissues such as dental cementum, dental dentin and the petrous part of the temporal bone in the skull are targeted. Research has demonstrated that the quality and quantity of DNA recovered from these skeletal tissues is several orders of magnitude greater than if other bones are used.

Even more recently, scientists have been using ear ossicles (three small bones in the inner ear) as the best samples for DNA. These ossicles have the added advantage of usually being tucked away from contaminants and they require no drilling of the bone.

Only very small amounts of bone/tooth powder (between 10 to 50mg) are needed for DNA extraction, but often the integrity of the bones has to be compromised to obtain these amounts, by cutting or drilling bone/tooth into sections that can be transported to the lab for analysis. Minimally destructive sampling techniques should be always used to prevent the unnecessary loss of skeletal remains.

DNA analysis has been regarded as the ‘gold standard’ in human forensic identification, but it is important to note that in any forensic case study, other pieces of information are equally important and necessary in order to put the DNA results into context. DNA identification is not devoid of problems. Some of the issues stem from the nature and structure of the DNA itself, but others have to do with the way DNA samples are collected, stored and analysed.

The chain of custody records the process of location, recovery, movement and analysis of a sample from the point at which it is collected up until the results are presented in court. The chain of custody has to guarantee that the DNA evidence has not been compromised in any way and that all the processes above have been conducted according to the applicable legislation and as recommended by institutions, such as the International Society of Forensic Genetics (ISFG). If the sample has not been collected properly (e.g. using gloves), it can be contaminated with the DNA of the person that is collecting it. If the sample has not been stored properly (in a fridge or freezer) until analysis in the lab, the DNA can degrade. If the evidence is not correctly labelled, this can lead to the mixing of samples. Similarly, if the methods used for DNA analysis are not appropriate, this can impact the efficiency of the results obtained. 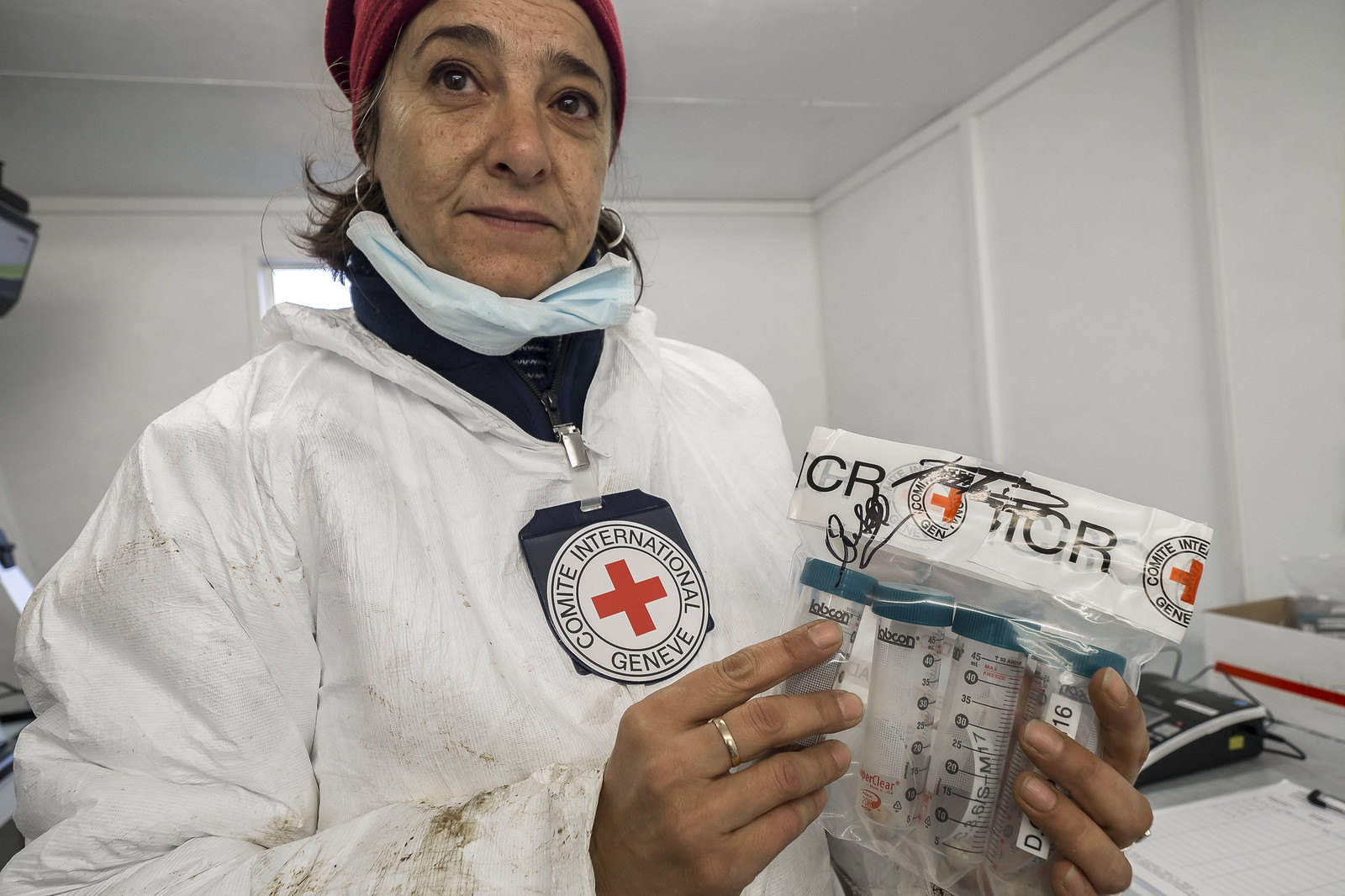 Near Darwin, Argentine military cemetery. Forensic pathologist Mercedes Salado Puerto has just sealed DNA samples into a plastic pouch, which bears her signature and that of Morris Tidball-Binz, the head of the project. Their signatures on the sealed pouch served as a guarantee of the chain of custody until the samples arrived at the forensic genetics laboratories in Argentina, Spain and the United Kingdom. (Photographer Didier Revol, Copyright ICRC)

DNA can degrade simply as a result of the environment in which the biological sample is kept. This could happen before but also after the evidence is collected. In general, high temperatures, high humidity and high or low pHs are detrimental for DNA preservation. DNA can degrade in many ways, but one of the main manifestations of DNA degradation is the breakage of the DNA strands into small pieces of 100-200 base pairs (bp). DNA bases can also be altered as a result of environmental degradation in ways that prevent the reactions needed to obtain information in the laboratory (‘DNA blocking lesions’) to work.

Even more worrying are the base modifications that ‘simulate’ individual base changes, as they can be misidentified as true mutations (‘DNA miscoding lesions’). Lastly, some compounds of the environment (‘inhibitors’) in which the biological sample has been preserved until the DNA is retrieved, can interfere with the processes of DNA extraction and genotyping. Soil fulvic and humic acids are powerful inhibitors, and so are some tissue proteins, such as melanin (present in hairs) or haemoglobin (present in blood). These compounds need to be removed during the DNA extraction process so the DNA genotyping can be completed successfully.

Different measures can be taken to prevent or minimise this type of contamination:

Access to forensic genetics laboratories is usually limited to a handful of individuals, whose genetic profiles are known and stored in the so-called ‘discrimination database’. 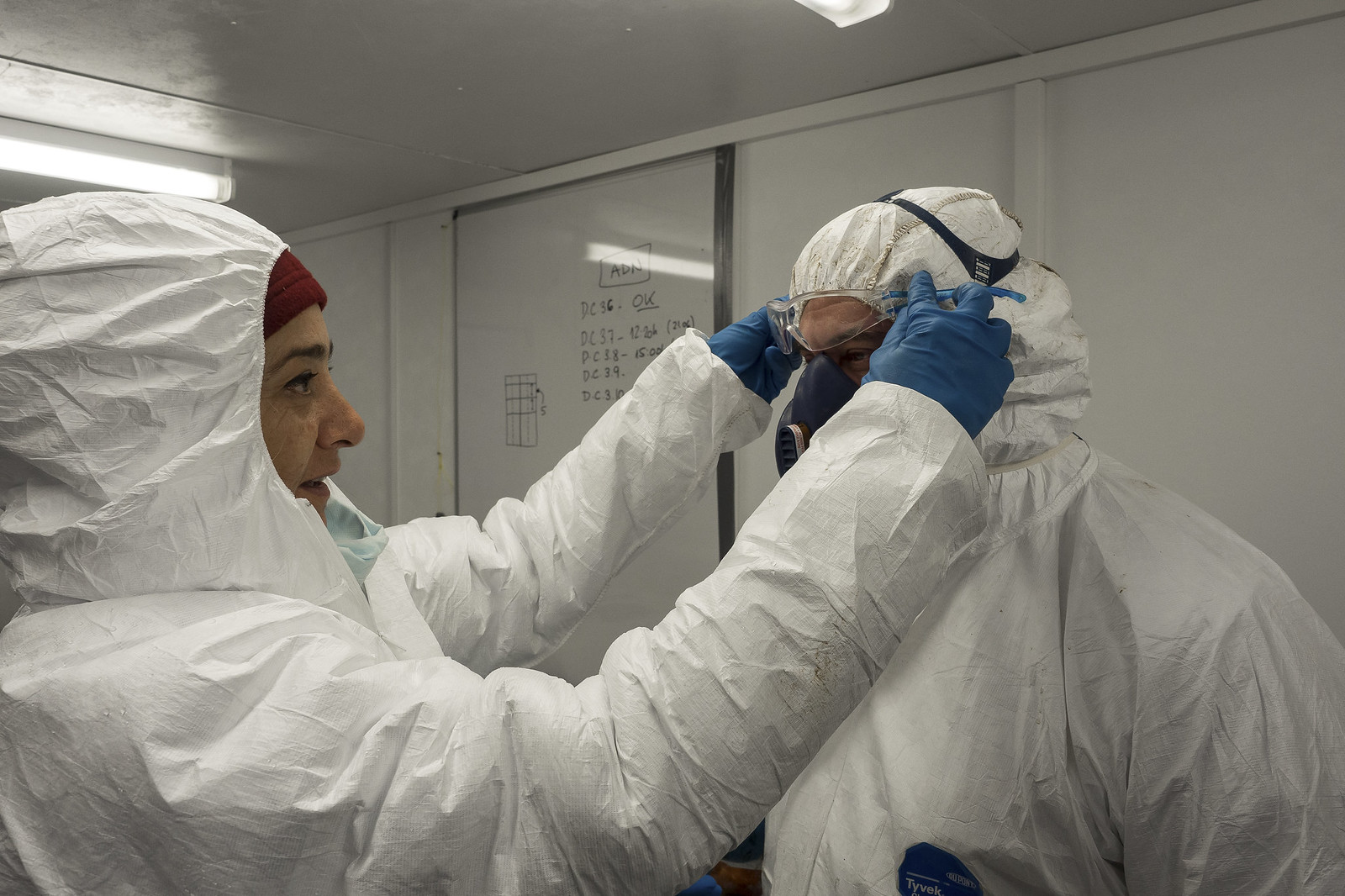 Near Darwin, Argentine military cemetery. The forensic work continues on the autopsy table where the mortal remains are analysed in-depth. In addition to documenting findings which will assist in the identification (e.g.gender, age, stature, dental traits), the forensic specialists collect small samples of skeletal material (teeth and bones) for later DNA testing by genetics laboratories. (Photographer Didier Revol, Copyright ICRC)

Contamination occurring before the arrival of the sample to the laboratory analysis can be controlled to a certain extent through the chain of custody. In a crime scene scenario, it is paramount to keep track of anyone who has accessed the crime scene and/or collected and sent samples for analysis.

In the next step, watch aDNA samples being prepared for analysis.