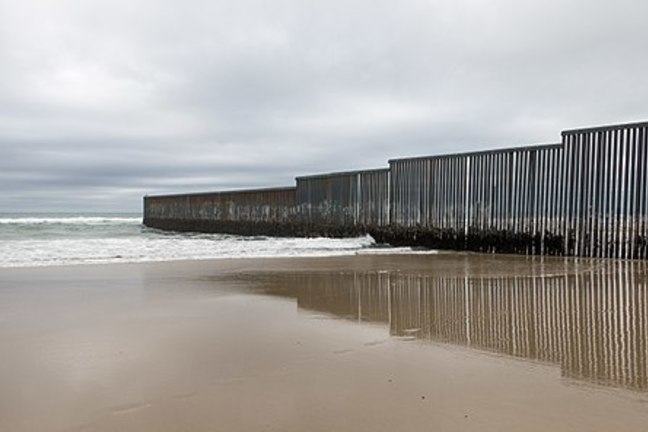 Border wall between the US and Mexico

There has been a lot media attention and discussion surrounding the movement of people across the southern border of the United States of America. Many of those crossing the US-Mexican border irregularly are in need of international protection.

The paths that irregular migrants use are often long and dangerous. Many of those who attempt these paths die along the way. As a result, there are significant numbers of deceased individuals decomposing along this region. The families of these people would need to be informed and given the option to decide how they want the remains of their relatives handled in a dignified manner. This may include identifying the individuals and repatriating their remains. Therefore, this can be both a national anthropological issue and a humanitarian crisis.

Most of the migrants, including asylum seekers and refugees make it into the US through Arizona and Texas, but they do not necessarily stay in these states. The Arizona OpenGIS Initiative for Deceased Migrants website is the result of an ongoing partnership between the Pima County Office of the Medical Examiner, or Pima County OME, and Humane Borders, Inc. It provides information on those who have died attempting this crossing. The project states that “Since January of 2001, over 3,000 undocumented migrants have died within the Pima County OME jurisdiction. The information presented is stark and perhaps unsettling. However, both Humane Borders and the Pima County OME believe that the “availability of this information will contribute to fulfilling our common vision.” Inadequate border control infrastructure combined with tight security in some areas have pushed irregular migrants into remoter areas, which are often associated with higher risks, thus making the crossing more dangerous.

It is important to remember that there is a long history of migration in some parts of Mexico, but that more recent political policies, combined with the US demand for cheap labour, have displaced many poor from rural areas.

There is a 750-mile Mexico-Guatemala-Belize border with few checkpoints. As a result of this complexity, the term ‘Hispanic’ or ‘Latino’ has been used, but this collective definition includes many different groups of people. ‘Latino’ includes individuals from different geographic origins, with different population structures and population histories.

From a forensic perspective, traditional means of identification may be inadequate for identifying the deceased remains of these individuals, because of a lack of accessible ante-mortem data, assumption of population for population-specific anthropological methods, and an absence of comparative DNA.

Forensic anthropologists are involved in the identification of irregular migrants in the border region. They also work in cities across the US to identify those who have died there, since irregular migrants remain vulnerable even after they enter the country. But how can you determine whether a deceased person was a migrant or someone who has been living in the US all of their life?

One approach to identification is to examine cultural and socioeconomic factors on the physical body. We can look for ‘indicators of marginality’. These could include:

Research has shown, for example, that skeletal and dental indicators of poor childhood health, such as porotic hyperostosis (an indicator of anaemia) and dental defects are considerably higher in migrants compared to non-migrants (e.g. Beatrice and Soler 2016). As we have seen in previous weeks, the lived experience of individuals is marked in their bones, and forensic practitioners can interpret these features to comment on geographical origins.

The Argentine Forensic Anthropology Team (Equipo Argentino de Antropología Forense, EAAF) is a non-governmental, not-for-profit, scientific organisation that applies forensic sciences to the investigation of human rights violations and humanitarian problems in Argentina and worldwide. Since 2009, their Border Project has created a Regional Exchange Mechanism on Missing Persons and Unidentified Remains, affecting Mexico, Central America, and the US, to provide an effective, regional, and scientifically based response to families across the region with missing migrant relatives. Further, it seeks to improve both the identifications of missing migrants, among unidentified remains in the region, and the response of governments to families searching for missing migrant relatives.

This project was initiated because of the distrust in the authorities investigating and identifying the missing migrants, combined with the fact that between 1998-2013 there was a 529% increase in the risk of death crossing the border into the US.

More information on the Forensic Border Coalition initiative can be found here.