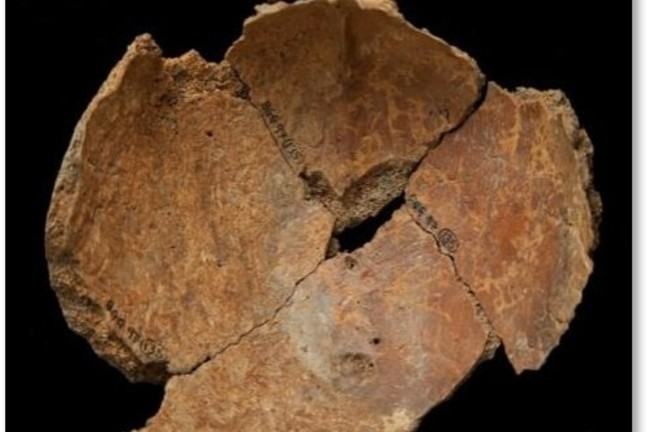 Internal view of a cranial fragment with peri-mortem trauma.

Domestic assault of elderly people, children and spouses is well documented within the forensic literature. Patterns of trauma from domestic assaults are sometimes difficult to differentiate from accidental injury: “I walked into a door” being a common refrain in relation to such trauma.

The pattern of skeletal injury will vary depending on the identity of the victim. Whether they are a baby, child, adult, or elderly person, there are some differences in the pattern of injury. This is due to the size of the victim in relation to the perpetrator and also differences in the properties of the skeleton at different ages. In children, the bones are still developing and they may sustain what are known as ‘greenstick fractures’. Here the bones partially break, but not entirely, due to the greater elastic properties of bones during growth.

In babies the phenomenon of shaken baby syndrome is well known. This is related to their small size and their immature stage of development. You would not expect to see similar injuries in older children.

The injuries sustained by elderly individuals from domestic assault (often by a spouse or adult child) may be more challenging to interpret. The loss of bone mass in older age means that the bones of elderly individuals will fracture more easily through accident. In older people with advanced osteoporosis, fractures can even be incurred during normal care of the person, such as washing and dressing them. Older individuals may also be more prone to falls through mobility or cognitive impairment. Despite this, there are still signs of skeletal injury that can raise suspicions of abuse (see below), particularly when contextual factors are taken into consideration. Forensic research into elder abuse is not as advanced as it is for child abuse. 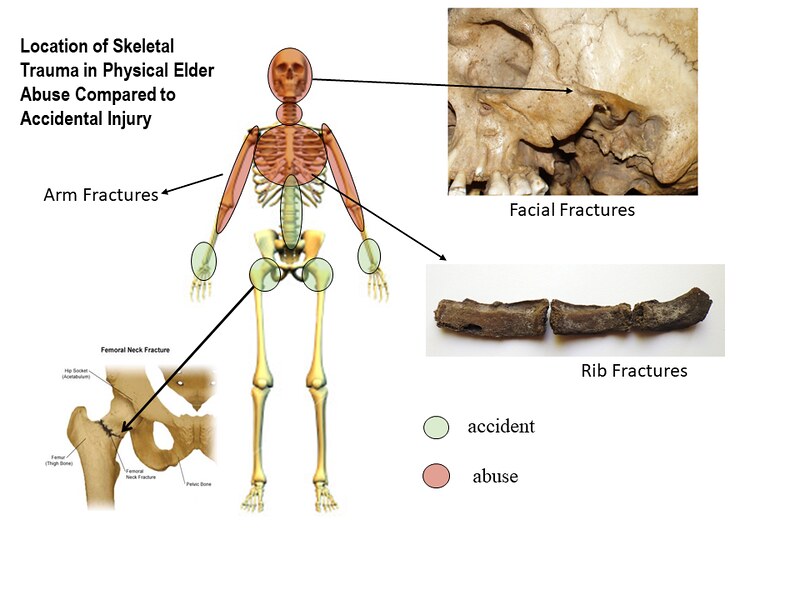 Accidental versus intentional injury in cases of elder abuse. This is based our research and more information can be found in Gowland 2016, International Journal of Osteoarchaeology, click ‘download pdf’ after the link

In domestic assault, injuries are more often directed towards the face (including the teeth), thorax and upper arms. Fractures in these areas should therefore raise suspicion. Multiple fractures in different stages of healing are very suggestive of abuse. In contexts of domestic violence assaults usually happen more than once. The skeleton can be particularly useful to examine in abuse cases, because whilst soft tissue injuries will heal, the bones retain a record of violence for much longer. It is important for pathologists examining potential abuse cases to be aware of the value of skeletal evidence. It is always of course important to interpret such evidence in relation to other contextual factors. For example, what is known about their family situation, or information regarding the overall condition of the individual when they were found.