0:07Skip to 0 minutes and 7 seconds As this is our first transcription, we would like to show you some hints that are useful not only for the transcription of modern notation but for all kinds of transcriptions. Transcribing helps to understand the relation between the voices. Although in modern notation, we have already a kind of score order, the voices are not exactly vertical to each other. In manuscripts of later times, they might even be on different pages or in part books. Concerning the note values, you have to take a decision. There is no right or wrong, and some scholars even prefer to keep the original values. It always depends on how close you want to stick to the original, or which is the easiest way to perform.

0:57Skip to 0 minutes and 57 seconds For modern notation, the nowadays most common way is to transcribe the longer note as a crotchet and the shorter as a quaver.

1:09Skip to 1 minute and 9 seconds Before we start, we have to face some basic problems. Where is the actual beginning of the piece? As the scribe of this manuscript used the space in a very economical way, the end of the preceding piece is on the same staff as the beginning of the clausula we want to transcribe. The beginning of the lower voice, the tenor, even hides itself in the initial go but is separated by the preceding piece by a line which marks the end. The same happens in the middle voice, called duplum. It is evident that the new piece starts here, as an accidental B-flat is applied.

2:35Skip to 2 minutes and 35 seconds If you want to work with your transcription at a later time, all this information might be important and could get lost if you do not note it down. Therefore, we put a so-called incipit at the beginning of the transcription. With the help of the incipit, it is possible to retrace your decisions. In the case of our clausula, this incipit looks like that.

3:07Skip to 3 minutes and 7 seconds In general, it is easier to read the more common treble clef, here transposed an 8th down, as we deal with tenor voices. I also put the accidental B-flat at the beginning of the duplum voice. As it might need this B-flat in the triplum, too, but it is originally not there, I should put it into brackets. These brackets indicate my addition to the original. Concerning modal notation, the choice of the mode is of special interest.

3:44Skip to 3 minutes and 44 seconds As you can see, the tenor has ligatures of three notes, subdivided by a line called divisio modi. Therefore, it is transcribed in the fifth mode with dotted crotchet and a dotted crotchet silence. As ligatures are an important information, you should mark them by square brackets. You can also indicate the divisio modi with short lines, but you should not misread them as bar lines.

4:25Skip to 4 minutes and 25 seconds Now let’s have a look at the upper voice. It has a repeated note in the beginning. Due to the rule that in ligatures two successive notes of the same pitch are impossible, we can deduce that it is meant as a three-note figure. This ternary ligature is followed by ligatures of two notes. So that we are in the first mode. We can transcribe the beginning like this.

5:08Skip to 5 minutes and 8 seconds As you can see, you have to plan your transcription in advance The upper voices need more space than the tenor.

5:23Skip to 5 minutes and 23 seconds As you can see in our transcription, in the end of every ordo of the upper voices, we reach the end of a phrase. Therefore, we transcribe the last two notes as dotted crotchets. Willi Apel called this changing of the rhythmical pattern extensio modi. He introduced this expression according to a historical term used by theorists of the time, fractio modi. In order to preserve the music of rhythmical monotony, while keeping the three voices coordinated, we can break off the mode by using every now and then smaller values to fill up the regular mode. In our piece a fractio modi is clearly marked with a ligature of four notes.

6:27Skip to 6 minutes and 27 seconds In this case it does not indicate a change of mode, but it indicates that the rhythm of the triplum has to be adapted to that of the duplum by using smaller note values. Here we have two quavers instead of one crotchet.

6:51Skip to 6 minutes and 51 seconds Another way to indicate smaller values are the so-called conjuncturae or currentes, which appear as the combination of a single note or a ligature, followed by a series of isolated notes of a descending scale. They do not always follow clear rules, but the internal logic of the music and the transcription depends on the context. One more rhythmical modification is triggered by the so-called plica, a pleat that seems to be related to what we called liquescence in the neumes, a note with a kind of appendix. The exact pitch and rhythm of the plica is not always clear and should therefore be marked with a small note.

7:48Skip to 7 minutes and 48 seconds Sometimes the meaning of the plica arises clearly from the musical context, as here, where it seems quite obvious that both upper voices are supposed to sing the same rhythm, although the scribe chose two different versions of writing it down. Therefore, transcriptions are very useful indeed.

Now it’s time to find out how to transcribe medieval notation.

In this video we will give you some general hints about the basic technique of transcribing music and explain the main issues of modal notation that you will meet whenever you transcribe this kind of notation. We will practise this upon the three-voice clausula Go from the manuscript Firenze, Biblioteca Medicea Laurenziana, Plut. 29.1, fol. 11r. 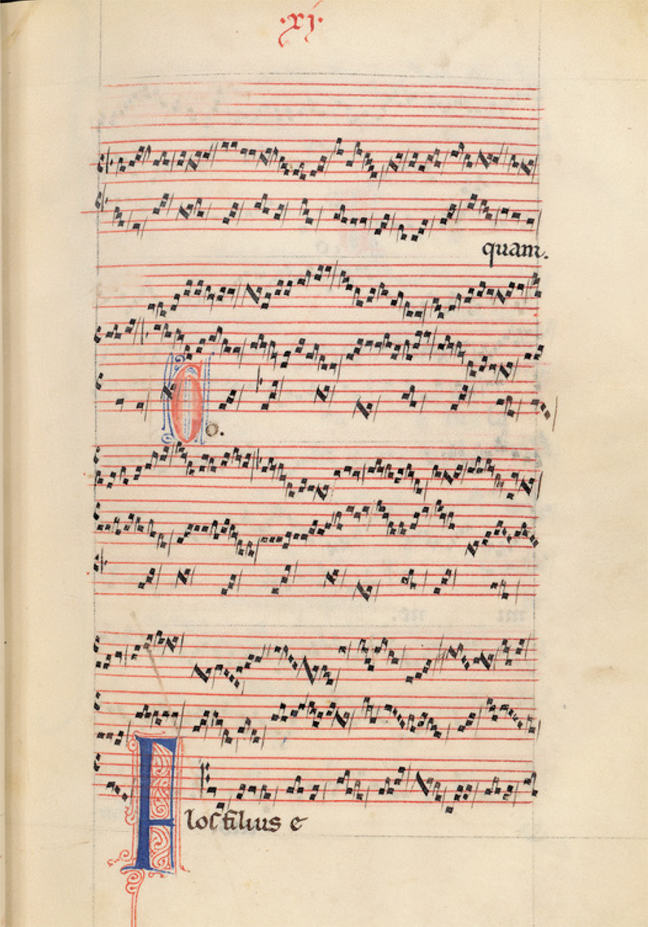 You can find the transcription of the piece in the ‘downloads’ section below.