With the evolution of notation in the first decades of the 14th century, four combinations of tempus and prolatio were introduced, attributed to Vitry as the quatre prolacions. The relationships between the note values came to be termed mensurations. A new problem arose: the question of detecting in which mensuration a piece is composed. In order to recognise the mensuration of a piece, the Ars Nova treatises suggested an easily understandable system of signs:

However, in the most manuscripts from the 14th century these signs are not yet in use. The systematic utilization of mensural signs began only in the 15th century. Often it is only possible to recognise the mensuration by identifying certain groupings of notes, rests or the use of dots.

Here you can find the most important criteria which will help you to recognise in which mensura a composition is meant to be.

1. First you have to look at the relation between the notes. This method helps to make a first estimation, but does not provide a sure result. If between two equal notes three notes of a lower value occur, the mensural relation will probably be perfect:

If only two consecutive notes occur between two notes of a higher value, this can be a hint for an imperfect relation:

(Watch out because this combination also exists in a perfect tempus or prolatio maior, in which case an alteration of the third note will be necessary).

If you find a series of notes that alternate between a longer and the next shorter value, the mensural relationship can be ternary. But be careful, this combination can be ambiguous:

A punctum additionis, on the other hand, indicates a binary mensural relation:

It is always important to look at the context. By doing so, it will be possible to confirm the correct mensuration. The assumption, for example, that the following dot is a punctum additionis can be verified easily: 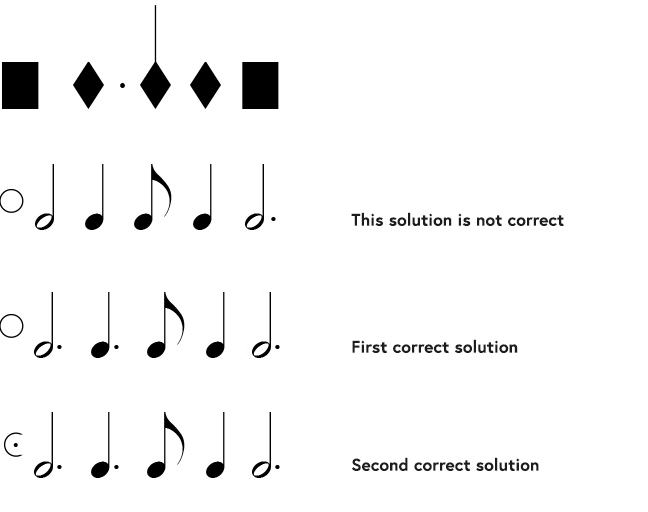 As you can see in the first transcription, we can exclude the possibility that it is a punctum divisionis because that would imply a tempus perfectum and a note value (a minima) would not correspond to the total amount of perfect units. On the other hand, there are no missing notes for a punctum additionis; it is, therefore, plausible that the passage is in tempus imperfectum with prolatio maior.

3. Third, you should take a look at the rests. This is the most certain way to determinate the mensuration. Two consecutive rests indicate that the mensuration is maior. Two minim rests, for example, indicate a prolatio maior, a semibrevis rest followed by a single semibrevis indicate a tempus imperfectum:

Finally, we can sum it up as follows:

The tempus perfectum can be indicated by:

The tempus imperfectum can be indicated by:

The prolatio maior can be indicated by:

The prolatio minor can be indicated by: