Differences between full and void notation

With the emergence of the so-called white or void notation the way of conceiving of music notation does not change. The general framework of writing down musical time remains mensural.

In fact there are many examples of manuscripts containing the same pieces notated in both black and white notation. This leads to some confusion which, however, only comes from the fact that the semiminima can be written in different ways (Step 6.2).

As far as the rules for alteration or imperfection go, nothing changed. The indication of coloration, on the other hand, was slightly improved: instead of changing the ink from black to red, the scribe could now just fill the void breves or semibreves using the same ink. And even if this could theoretically lead to misunderstandings if a blackened minim was needed, since that looks like a crotchet, the musical context clarifies the situation. Perhaps another solution would have been found for this problem; but with the decline of coloration, the problem solved itself. The colour did survive, though, until the beginning of the 17th century, but primarily as the so-called minor colour which was an ‘especially important case of coloration in tempus imperfectum […] consisting of a blackened semibrevis followed by a blackened minima’ (Willi Apel. The Notation of Polyphonic Music 900–1600. The Medieval Academy of America: Cambridge MA, 1953, 128.), with the meaning of a dotted rhythm.

Here you can see the color minor:

The color minor was an alternative writing for a dotted note:

It is interesting to realise that during the 16th century this ‘confusion’ or, rather, shift from one aspect of notation to the other is also reflected in the different languages. Whereas the Italian remains loyal to the Latin terms up to semiminima, the English uses the term crotchet (referring to the hook which nowadays does not exist anymore!), the French uses the new term ‘black’ (noir) and in Spanish, both terms (semiminima and negra) are common. In German, the term Viertelnote (quarter note) heralds the end of the ‘divine’ perfect division into three.

In the following table (after Manfred Hermann Schmid. Notationskunde. Schrift und Komposition 900–1900, Kassel: Bärenreiter, 2012, 151.) you can compare the names of the notes in different languages: 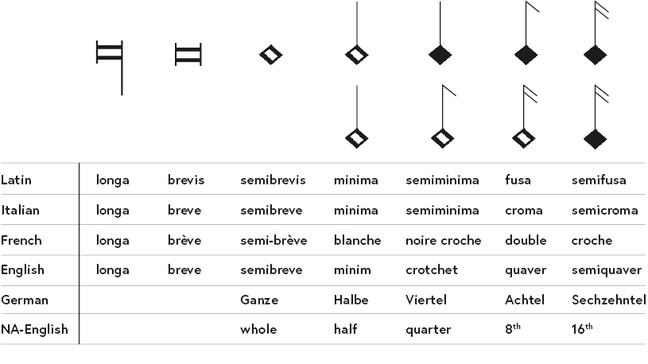