Close up on St Gall neumes

The signs listed on the table of neumes were only the most common neumes used for the notation of liturgical chant in different regions.

The table you find in this step shows both the basic shapes of the St Gall neumes used in the introitus Sacerdotes tui and the variants and the special neumes employed by the medieval copyist. 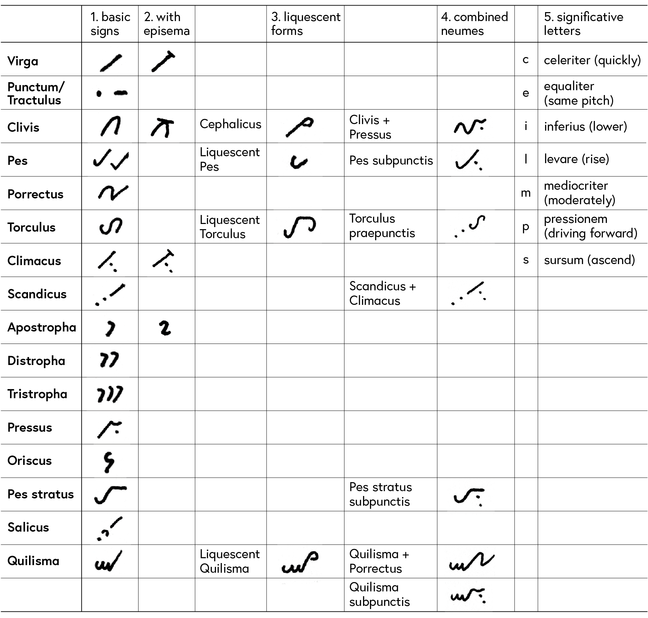 In column 1 you see an extended list of the basic signs of St Gall neumes. In column 2 there are some neumes with episema, a small stroke that is here added in order to retard the performance, and in column 3 the so-called liquescent forms of neumes.

Liquescence is a feature of neumatic notation which arises in singing liquid and sonant consonants and diphthongs to provide a semi-vocalisation of that consonant as a passing note to the next pitch.
In column 4 you can find some combined neumes used in the introitus Sacerdotes tui and in the last column 5 a selection of significative letters used in St Gall.

This little letters were part of the notation and were meant to clarify the meaning of the neumes affecting the rhythm, the pitch, or the manner of execution.

We suggest that you go to the original manuscript and try to correlate the signs from our table to the neumes you find there. Note that we shall address this manuscript in detail in the following steps.

We recommend you to download and print the table of St Gall neumes as you might need it again in proceeding steps of this course. You can find it in the ‘downloads’ section below.