During the late 11th and early 12th centuries the so-called square notation evolved as a stylisation of the French neumes. They were written on a four-line staff system derived from the use of lines introduced by Guido of Arezzo. Likewise this notation system adopted the use of the letters C and F as clefs. The process resulted in a way of writing music down that is still used today for liturgical chant.

While the neumes were still in use, some French scribes began to thicken the signs at the points where they touch the line. This thickening lead finally to the depiction of the note heads as square forms.

To notate in this way, with thick horizontal and hair-thin vertical strokes, required a different pen-hold from that used for writing literary texts. These new requirements and techniques led to the separation of cursive notation (for private musical jottings) from formal book notation (for official use). (Hiley and Szendrei 2001, 110) 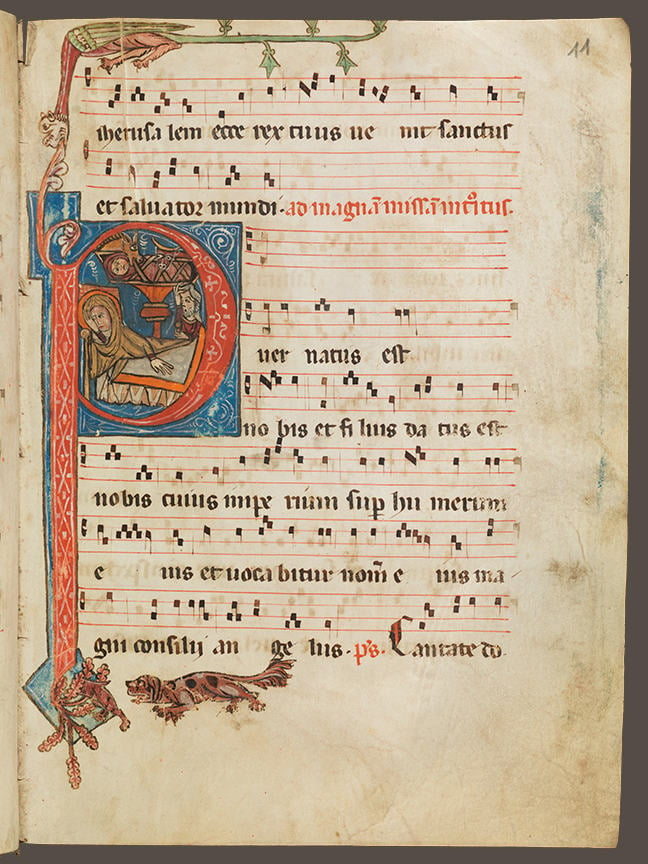 The French square notation of the 12th century was the starting point for the evolution of the later forms of medieval and early modern notations.
The square notation consists in the following neumatic signs which are notated on the four-line staff:

The sign repertoire consists of single notes (as the puntcum, virga) and bound notes (as all the others). It is important to learn in which direction they have to be read: The pes has a left-facing head and is meant to be an upwards interval. The porrectus consists of a diagonal thick line and a left-facing head: it indicates a three note group consisting in a down- and upwards movement. The climacus, finally, consists of a virga and two puncta (which take the form of small rhombs) and represents three descending notes. In French square notation the direction of the script is vertical ascending and diagonal descending.