Last week we discovered that ligatures are the central means to convey rhythm in the modal notation of the 12th and early 13th centuries. We learned that in modal notation they represented some sort of ‘numerical code’ that was used to indicate pre-existent rhythmic patterns. In the course of the 13th century, however, rhythm began to be encoded in the very shape of the ligatures themselves. By 1260 the ligatures increasingly came to signify rhythmic combinations of short and long note values. In this article, we want to introduce you to the first phase of this evolution: the pre-Franconian system of ligatures.

During the second half of the 13th century rhythm became legible in the shape of notation figures, thus rhythmical sequences were expressed by the shapes of the ligatures. The notational signs of ligatures gradually lost the semantic ambiguities they had had in modal notation and as a consequence, the exact form of the ligatures gained crucial importance for the writing of rhythm. In the prominent motet manuscripts of the 13th century – Codex Bamberg (Staatsbibliothek, Lit. 115) and Codex Montpellier (Faculté de Médecine H 196) – the ligatures acquired the capability to indicate short or long note values. While in this manuscripts the tenor voices were often still written down in modal notation, for the upper voices ligatures were used in a new way: short or long note values could be read directly from the shape of the notes. However, the so called pre-Franconian ligatures had still to be read in the context of the neighbouring notes: depending on whether a ligature took the duration of a perfect longa (three tempora), of an imperfect longa (two tempora) or of a brevis (one tempus), they could signify different rhythms. A dash of ambiguity remained. The following table shows the different forms of ligatures and their corresponding values in place of one, two or three tempora. 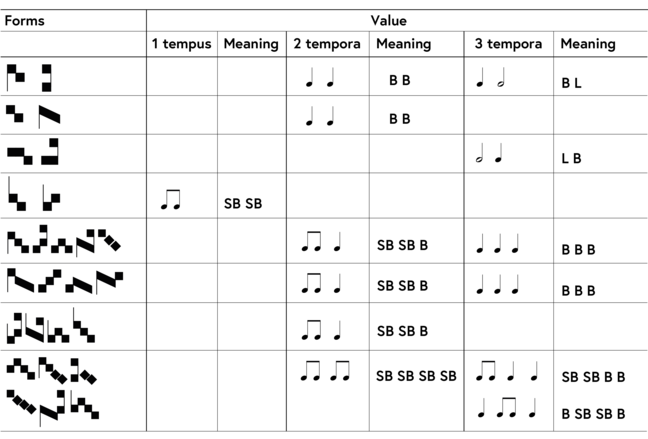 Pre-Franconian ligatures (before Franco of Cologne). The same ligatures could have different values depending on their context. L = longa; B = brevis; SB = semi-brevis click to expand