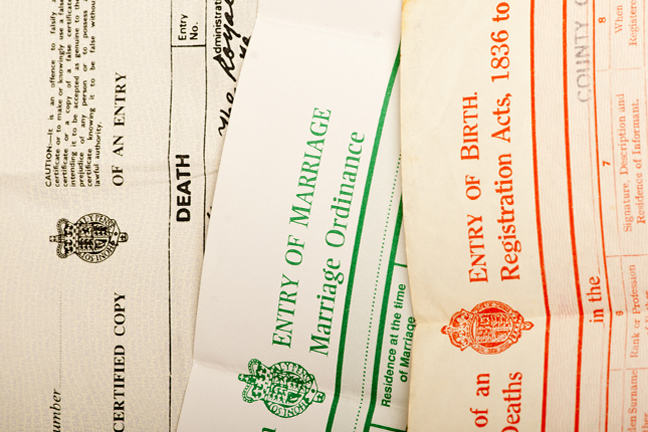 Generally, civil records are created by government entities to record the vital events of its citizens. These events most typically include birth, marriage and death but can also include divorce, adoption, legitimisation, annulment of marriage, and foetal death. The registration of events in many countries is legally mandated and fines can be levied if an event is not registered.

Civil registration gives people a name and identity within society which facilitates the delivery of benefits and government services. Their creation also provides a data source for vital statistics so that a government can tell how many people died, were born in a year and so on.

Civil records also give evidence of parentage and thus evidence of entitlement to inheritance. Civil registration also provides a facility for marriage and (in some countries) civil partnership that does not depend on religion.

In many countries, the responsibility is on the people involved in an event (parents, marriage or civil partnership participants, family of the deceased) to inform the government; a process normally termed registration. Historically, in some places, a government employee would tour an area to discover and thus record events instead of the parents or other parties having the responsibility to seek out registration.

The level of government, Federal, state/provincial, county or city, responsible for civil registration varies by country and also potentially by time period within a country. In the United States of America civil records are now usually maintained at the state level by a department of public health however, marriage records are often dealt with at the county level. But, many exceptions apply to US civil records and it’s best to check out the local situation before making assumptions. In contrast, civil registration in England and Wales is taken care of by a national system administered at the local level by registrars. Records are then copied to a national office for central storage. Civil registration in Scotland, Ireland and New Zealand is also centrally maintained.

Generally speaking in Canada and Australia civil records are created and maintained at the provincial/territorial or state level, respectively.

Due to the influence of Napoleon and his advance across Europe, many areas under his rule began civil registration from the late 1700s. In many places, this system continued even after re-gaining autonomy. French civil registration records for example, date from 1792 and are held at registries in local town halls.

Civil registration came rather late to the ‘New World’ compared to countries in Europe and dates do vary from place to place; again you are encouraged to research local variations.