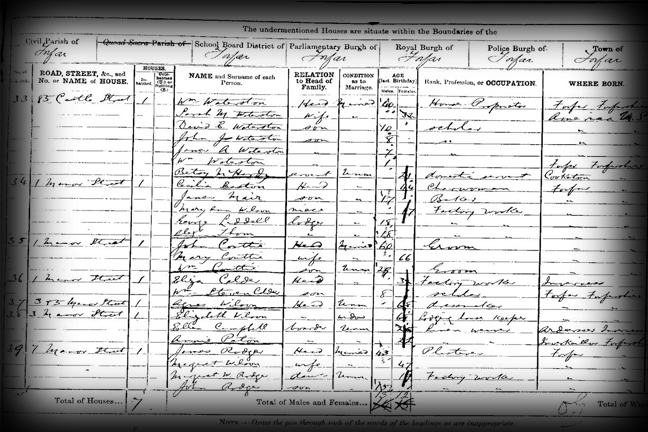 What are they and how are they useful for genealogists?

Generally, census records are typically created by government entities to count (or enumerate) the people living within a particular area. The Oxford English Dictionary defines a census as, ‘an official count or survey, especially of a population’. Censuses have been taken by bodies such as churches and individuals however these are not focused on in this article. For genealogists, they are very useful as they pinpoint your ancestors to a given location at a particular time and they often show people in family groups which can reveal relationships and previously unknown family members. They can include information on occupations, parental origin, year of migration, ability to read and write, religious affiliation and much more.

Nowadays, often by sending out a form in the post and then if a household does not reply, a census enumerator will come to your door. A number of countries are now doing away with a formal census and relying on data taken from various systems (education, taxation, national identification schemes, etc.).

Historically, enumerators were assigned a set route and they would deliver a form to each household on their route; the householder would fill it in and give it to back to the enumerator the next day. Be aware that if your ancestor was not literate, they would require help to fill in the form and this could lead to issues with the spelling of names.

The very earliest censuses happened in ancient times but for genealogical purposes an early census of interest is that of Iceland in 1703 which recorded the name, age, residence, and social standing of every inhabitant; an index of this census is available.

It is usual for censuses to be taken every 10 years though some areas hold them on a 5 year cycle. Again, this frequency can change over time so do check your area of interest.

Some countries do not keep (or have not kept for particular years) the individual/family details taken as part of census enumeration, thus all that is available to us are the statistical outcomes. These can be interesting as they give a flavour of the area in which your ancestors lived but no information on a particular person will be available.

It’s important to find out who was supposed to be included in a household as this varies by country to country and from time period to time period. In some places, only those staying in the residence on the census night were to be counted in that household and in others, those who were ‘normally resident’ were to be counted. Obviously knowing this could change your thoughts of who you anticipate being on the census at that address!

Substitutes for censuses can include local directories which list residents of an area, town or city by name and usually by address; voters rolls which only list people eligible to vote and are usually arranged by address; taxation rolls – these can include taxes based on property and an example of these are the Scottish valuation rolls which were produced yearly and list the names of the owner and if a property was leased or rented the main householder’s name for each property. Also look out for taxation assessment lists which list people and businesses who were liable to pay tax; these are often arranged by area and then by name and are usually taken yearly.