This content is taken from the University of Twente's online course, Geohealth: Improving Public Health through Geographic Information. Join the course to learn more.
View course 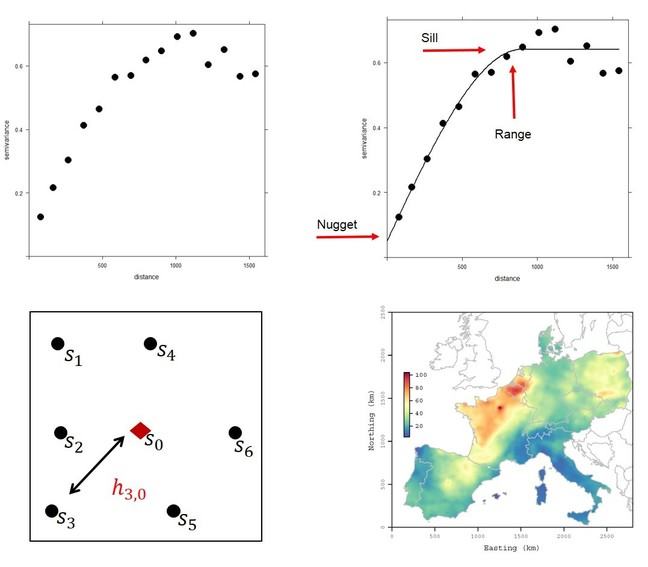 We can already gain useful information from the sample semi-variogram. The lag distance where the sample variogram flattens is called the range. This is the maximum spatial separation where we expect two points to be correlated. The range is associated with the variogram sill, which is the maximum variability in the data. Finally, the point where the variogram approaches the y-axis is the nugget. The nugget is the non-spatial variability. These three parameters (sill, nugget, range) can be identified if we fit a model to the sample variogram. The model is a curved line, as illustrated in Figure 1 (top right).

The sample variogram and variogram model are useful for exploring the spatial dependence in a dataset. They can also be used for mapping. Consider Figure 1 (bottom left). The red diamond indicates a location where we do not have a measurement whereas we do have measurements at the black dots. We know how far the red diamond is from each black dot. Using the variogram we can then say how correlated it is expected to be with that black dot. We can then predict the attribute at the red diamond as a weighted average of the attributes at the black dots – where the weights are based on the correlations. This prediction is also called interpolation. The geostatistical approach to prediction is often called kriging, named after Danie Krige, an early researcher and practitioner in geostatistics.

Figure 1 (bottom left) illustrates prediction at a single location. If we predict at multiple locations on a grid we can create a map. Examples are shown in Figure 1 (bottom right) and Figure 2, which are based on data presented in the step on Spatial Dependence.

Figure 2 Map of malaria parasite rate, based on the data shown in Figure 3 of the Article on Spatial Dependence. See also Hay et al. 2009.

The maps shown in Figure 1 (bottom right) and Figure 2 are the concluding examples in the module on spatial statistics in this online course. These are important examples in the context of geohealth. Consider the air pollution example. We can use such maps to estimate individual exposure as part of an environmental epidemiological study into the health effects of air pollution. The malaria example is different because the disease itself is mapped rather than the possible cause of a disease. Such maps can be used to target interventions aimed at eliminating a disease (e.g., drug treatments, bed nets) and for evaluating the success of interventions.