As shown in the table, Russia, and specifically Gazprom, is the largest single supplier of gas to European countries.

In 2013, Gazprom exported a record volume of gas to Europe, significantly exceeding deliveries in the 2008– 2012 period and, due to a fall in European demand and deliveries from other indigenous and external suppliers, representing 34 per cent and 30 per cent respectively of European imports and demand (Dickel et. al, p. 4).

Geographical patterns of dependence on Russia

Different countries have different degrees of exposure to disruption of supplies from Russia. Germany and Italy import significant amount of gas from Russia but are protected from disruptions, because they have sufficient storage capacity and a very strong, long-lasting, and established commercial and political relationship with Russia.

France, the Netherlands, Italy, and Greece possess indigenous supplies and enough LNG facilities to diversify away from Russia.

Poland is classified as a country with potentially high exposure to energy supply insecurity. Most of former Eastern European and Baltic countries fall in this category. They are already dependent on Russian gas, and coal consumption dominates the energy mix. If European climate policy is effective in driving these member states to reduce CO2 emissions by diversifying away from coal consumption, then their exposure to natural gas supply security will grow (Chi-Kong Chyong & Vessela Tcherneva 2015).

The vast majority of Russian gas exports to Europe are sold on long-term contracts varying from 10 to 35 years in length. These contracts contain take-or-pay clauses which require buyers to pay for a minimum annual quantity of gas, irrespective of whether they take that quantity. In the post-2008 period, the take-or-pay level in many of these contracts was reduced from 85 to 70 percent. European buyers are committed to purchasing more than 125 bcm of gas from Gazprom in 2020 and around 70 bcm in 2030 (Dickel et. al., p. 4).

Gazprom has priced its gas according to individual market conditions, creating apparent anomalies in prices across Europe. Distance from Russia plays no role in the pricing decision. On average countries in South-East Europe and Central Europe pay more than countries in Western Europe (Henderson & Mitrova, p. 34). 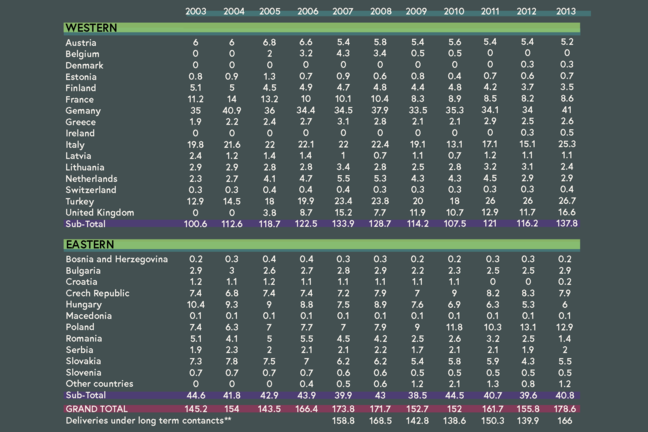