The three cascading constraints (3CC) view of globalisation made easy

Globalisation is all the things that happen when goods, ideas, people and capital cross borders. Leaving aside capital (since it involves a very different set of issues), this suggests that globalisation has been constrained by the high cost of moving goods, ideas and people. This perspective is at the heart of the broader view of globalisation that I introduced in the last step.

To understand the framework, it is useful to explain how the three costs, that is to say the three constraints, have fallen.

In the pre-globalised world, production and consumption were clustered in tight geographical areas since it was so difficult to move anything anywhere (see graphic 1).

As illustrated in the graphic 1, people were tied to the land and production was bundled with people (due to high trade costs), manufacturing was small-scale and widely dispersed. High communication costs mattered for a different reason.

As a result, the planetary economy was basically a patchwork of village-level economies. The whole world’s economic geography was very homogeneous economically. Quite simply, people were poor and societies were mostly agrarian since almost everyone made a living on the land. Trade did happened - for instance Roman Emperors wore clothes made of silk cloth made in China – but such trade was rare. Buying goods that were made faraway was something that could be enjoyed only by the rich and powerful.

Of course, there were exceptionally large cities that traded a lot, before the 19th centuries, but these were exceptional. For most people, consumption meant locally made food, clothing and shelter since it was too costly to get things made further away than walking distance.

As people were tied to the land and production was bundled with people (due to high trade costs), manufacturing was small-scale and widely dispersed. The production, after all, had to take place within walking distance. This dispersion of production mattered since it deadened progress.

Very little innovations went on and this innovation that did occur tended to spread only very slowly, if at all, due to high communication costs. The use of magnetic compasses for navigation, to take one example, was invented in China where it was used for navigation from around the year 1000. It took more than two centuries for this knowledge to come to European navigators.

To help you remember the point, I have illustrated in Graphic 2. Dispersed production meant very small scales of production and that, in turn, meant innovation wasn’t very worthwhile, so not much innovation happened.

GDP per capita stagnated in most parts of the world

Without innovation, incomes stagnated. That is why incomes stagnated for most of human history. If some development did come along to improve things, say the invention of steel, or new agricultural techniques, the result was more people, not higher income per person. The population expanded until the per-person productivity in agriculture was pushed back to a level that was not far from starvation. This is called Malthus’s Law.

The outcome of this stagnation can be seen in the Graphic 3. For the 15 centuries after the “year zero”, there was almost no increase in income per person. The only exception was Western Europe and even there, growth was extremely slow. Average incomes rose by something like 10 percent per century.

In modern times, invention is the fuel that drives growth. New ideas, new products, and new ways of arranging work boost the production per worker directly. They also lift the reward to investing in new machines and new skills and so boost output indirectly as well. Investment in these forms of ‘capital’ (physical capital and human capital) are thus the consequence of innovation.

The cost of moving goods over great distances fell radically in the 19th century due to revolutionary advances in transportation technology and the relative peace that came with Pax Britannica. This made it economical for people to buy goods made far away, as Graphic 4 suggests.

Once this separation of production and consumption was practicable, the big international price differences made long distance trade profitable. The booming trade and the new opportunities and competition that came with it - guided nations to focus on the production of their most competitive sectors. As the saying goes, they did what they did best, and imported the rest.

In other words, the fact that trade costs fell but communication costs fell by much less induced industry to micro-cluster locally even as it dispersed internationally. This micro-clustering of production had an historic impact on the world’s economic geography.

The crowding together of large-scale manufacturing ignited a ‘bonfire’ of cumulative innovation and modern economic growth, as Graphic 6 suggests.

As trade costs continued to fall, this cumulative process – which operated throughout the 19th and 20th centuries – resulted in most manufacturing taking place in today’s rich nations. This is how and why the G7 nations industrialised while China and India-Pakistan deindustrialised during the Old Globalisation (as you can see from the data in Graphic 7).

The high cost of moving ideas meant that the fruits of these new ideas stayed local, i.e. in today’s rich nations. Incomes and wages rose in industrialising nations but much less elsewhere in the world. In this way, the easy movement of goods combined with the difficult movement of ideas led to a very lopsided accumulation of know-how in the advanced nations. The result was the Great Divergence of incomes and wages between today’s rich nations and today’s developing nations. As the Graphic 8 shows, the G7’s share of world income soared while that of China and India plummeted from 1820 to about 1990.

Revolutionary advances in communication technology radically lowered the cost of moving ideas internationally. This made it possible to coordinate different stages of manufacturing at great distance. Given the big wage differences between the G7 and developing nations, many industrial firms in today’s rich nations – especially in the US, Germany and Japan – found it profitable to offshore some stages of production to low-wage nations as illustrated in the Graphic 9.

Putting it differently, the ICT Revolution relaxed the constraint that had forced the micro-clustering into factories and industrial districts. Once it became thinkable to separate various stages of production, firms moved some stages of production to nearby developing nations to take advantage of lower wage costs.

The offshoring of some production stages was made possible by lower communication costs. The offshoring, however, didn’t end the need to coordinate – it just switched the need from a domestic matter to an international matter. As a result, the offshoring firms sent their knowledge along with the jobs. After all, they had to make sure that the unbundled stages operated in harmony with the whole. This meant that low-wage labour was working with advanced technology, as the Graphic 10 suggests with the light bulbs crossing international frontiers instead of staying within national boundaries.

The new, ICT-enabled combination of high-tech and low wages has transfigured the world of manufacturing across the planet. This change, in turn, is an important reason for the sudden and massive shift in manufacturing from G7 nations to a handful of developing nations – especially China, as the Graphic 11 shows. 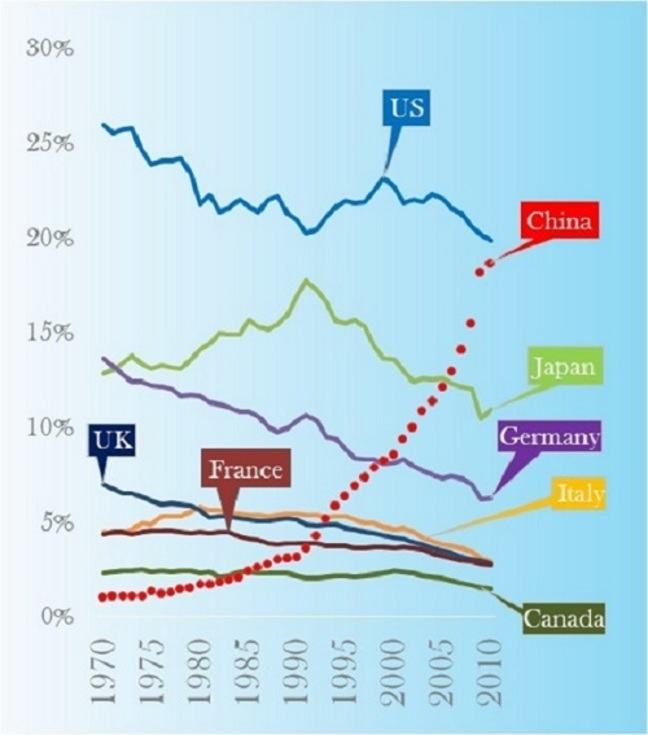 From 1990, the ICT Revolution relaxed the communication constraint and G7 factories unbundled across North-South borders. This changed technology boundaries; technology became less defined by national borders and more by the contours of international production networks.

To put it differently, the flows of goods, know-how, investment, training, ideas, and people that used to flow only inside G7 factories became part of international commerce. That’s really the heart of the difference between the Old Globalisation and the New Globalisation.

The world-shaping outcome of this was that the new knowledge flows started to rebalance the massive knowledge imbalance that had arisen during the Great Divergence, as the Graphic 12 shows. Of course, the knowledge didn’t flow everywhere – the G7 firms doing the offshoring worked very hard to prevent their precious know-how from spreading beyond the factories in their supply chain.