This content is taken from the The Graduate Institute of International and Development Studies's online course, International Affairs: Globalisation. Join the course to learn more.
View course

0:08Skip to 0 minutes and 8 seconds In this step, we’ll look at the basic economics of globalisation– why nations trade. To really understand globalisation, we must understand the basics. And to do that, I invite you to suspend disbelief for the next few minutes. I’d like you to get ready to think abstractly because we’re going to simplify to clarify. Remember the parable of the cannonball and the feather? That was about gravity, and we assumed away some complicating factors like air resistance to understand the real effect of gravity. When it comes to trade, the logical equivalent of gravity is called comparative advantage. I’ve been teaching this for about 30 years, and I’ve noticed that many students get shocked at the concept. It often goes something like this.

1:00Skip to 1 minute and 0 seconds I say comparative advantage is the ability of a country to produce a good at a relatively lower price than someone else. And the student looks at me in disbelief and says, why is that important, interesting, or– that I need to know it? And I say to him or her, because it is the fundamental reason countries trade, and it explains why nations export the goods they do. Moreover, it explains why all nations gain from trade. And then I see a big, blank stare on their face, and if they say it out loud, it’s huh? Now, to get past that, I’d like to try something new today.

1:45Skip to 1 minute and 45 seconds Let’s talk about something completely different and then flip it back to show that we were actually talking about comparative advantage. Specifically, I want to talk about smuggling. A simple case study– I’m going to look at smuggling between Italy and Switzerland in the 1940s and ’50s, when cigarettes were smuggled for rice. So here you see the horses on the Alpine pass or guys carrying packs in the Alpine pass. Now, one thing to note, the key to this thought experiment, is that the Italian lira was not convertible. In other words, the Italian currency could not be switched into Swiss francs. It was worthless outside of Italy. So you had to pay for smuggled goods in terms of other goods.

2:32Skip to 2 minutes and 32 seconds That’s what we call barter. You had to exchange cigarettes for rice. You couldn’t sell cigarettes for money and then use the money, taking it out of Italy to sell it for something else. Now, to get our heads around what’s going on here, we need to be more specific about the relative price of cigarettes in Italy and Switzerland. So if we look at this table here, we have the price of cigarettes and rice, and we’re going to look at it in the two domestic markets, first of all in Italy. In Italy, we look to see a kilogramme of cigarettes costs 100,000 liras. This is, of course, just an example, and I’ve chosen the numbers to make the arithmetic pretty easy.

4:53Skip to 4 minutes and 53 seconds The answer is obviously cigarettes. And what do you think is in the packs going from Italy back to Switzerland? And the answer, of course, is rice.

7:31Skip to 7 minutes and 31 seconds As long as the relative prices are different within the two countries, there can be a gain from– both parties can gain. So what does this have to do with comparative advantage of trade? The simple fact is free trade is legalised smuggling. The logic of why people smuggle goods from one country to another when the relative prices are different is exactly the logic of why countries trade. That’s the law of comparative advantage, and it explains why countries trade. It explains why they export the goods that they do export and import what they do import. And it explains why all nations can gain from trade.

How smuggling can explain the basic force behind trade

This video uses the example of smuggling between Italy and Switzerland in the 1950s to illustrate how trade is a buy-low-sell-high opportunity for all nations engaging in trade.

Trade is driven by the fact that some things are abundant and thus cheap in some nations while being scarce and thus expensive in others. As long as this is true, nations will find trade almost irresistible.

Summary of the video

Just after WWII, few European currencies were ‘convertible’, i.e. they were basically worthless outside their own nation. A French or US bank, for instance, would not exchange Italian lira for dollars or French francs. As a result, smuggling involved barter, i.e. the exchange of one good for another.

A lively smuggling trade was organised between Switzerland and Italy involving Italian rice exchanged for cigarettes from Switzerland. The Italian rice part is easy to understand – northern Italy is ideal for rice farms – but a tropical product like tobacco from alpine Switzerland?

The Swiss franc was one of the few convertible currencies, so Swiss traders could easily get US dollars to buy tobacco from Latin America and have it shipped to Basel and from there overland to the Italian border. In fact, Swiss cigarette factories were often located near the Italian border to facilitate the trade and indeed the Swiss factories developed special packaging for smuggling. The cartons had 25 packs (instead of the standard 10) to minimize the weight of the packaging and they were wrapped in tar paper to protect them from the wet weather.

The Italian government, by contrast, made it very difficult to import cigarettes since it had the national monopoly on tobacco and was trying to spare its scarce dollars to buy essential goods like medicine and fuel. 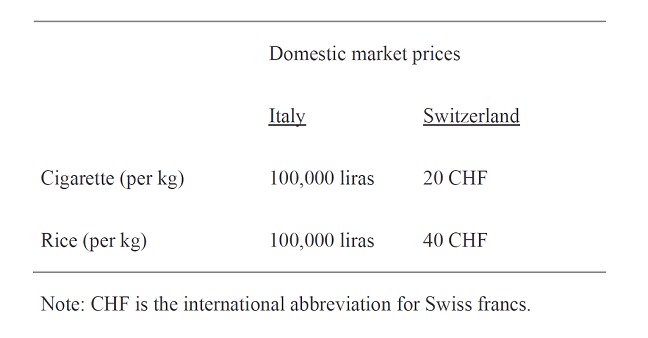 A Swiss-based smuggler could buy 100 kilos of cigarettes locally for 2,000 CHF, hire some strong young men to bring them over the Albrun Pass to Italy and exchange it for rice. What would the smugglers get for their efforts?

The Italian participants would surely refuse to pay the full Italian price of 100 kilos of rice for the 100 kilos of smuggled cigarettes since they could get that price legally. The Swiss smugglers would refuse anything less than 50 kilos. Just to be concrete, say the deal is struck at 75 kilos of rice for the 100 kilos of cigarettes. To finish the cycle, the Swiss load up their packs with the rice, return to Switzerland and sell the 75 kilos for 40 francs per kilo. Or perhaps somewhat less since the Swiss purchasers would need an incentive to buy from smugglers instead of the local store. To be concrete, suppose the Swiss smuggler gets 30 CHF per kilo of rice. Overall, the relative price moves from 1 to 4/3 in Italy while the relative price is Switzerland moves from 2 to 3/2.

Who won from this smuggling?

Clearly the Swiss side won, since they turned their original investment of 2,000 CHF into 3,000 CHF. Strange as it may seem, the Italians also won. The Italians got 100 kilos of cigarettes for the price of 75 kilos of rice. That is, they paid just 7.5 million liras, instead of the full price of 10 million liras. In this sense, the smuggling is a ‘buy-low-sell-high’ opportunity for both the Swiss and the Italians.