PLEASE NOTE: This course was retired on 20 Feb 2018. This means it is no longer being updated or maintained, so information within the course may no longer be accurate. FutureLearn accepts no liability for any loss or damage arising as a result of use or reliance on this information.

0:33Skip to 0 minutes and 33 seconds Welcome to the MOOC Gravity, where we will study all the aspects of the gravitational force. So all of us have experienced, gravity just by letting drop the ball.

0:50Skip to 0 minutes and 50 seconds But there is much more to it than that. For example, gravity is a force behind the evolution of the Universe, and George who is a great expert in early cosmology, in the early Universe, can certainly explain to us what is all of gravity in the Universe? Well, it turns out, even though gravity is a very weak force– the weakest we know– it turns out to have a dominant role in the history of the Universe. It helped shape the Universe, starting with simple things like the creation of space and time. And all the rapid early developments at very high energies. But it also had occasional surprises for us.

1:26Skip to 1 minute and 26 seconds So we’re all familiar with throwing a ball in the air and having it go in a nice trajectory. But the Universe sort of starts out that way. It’s going faster it’s going fast and then slowing down like the ball is. But in this case, the Universe speeds up and goes away. Like the ball had flown from us. And so occasionally there’s surprises. But most of the time, gravity follows the simple basic rules we learned when Newton made it is first universal law that we’ve had for 300 years. But it’s still a fundamental driving force, and it’s all just different aspects. And it’s critical to our understanding of the Universe.

2:03Skip to 2 minutes and 3 seconds Until for some places in the Universe where gravity is playing a special role. I’m thinking black holes, for example, where what’s left to really discover what is all of gravity very close to black holes? But I think we are living in a period where we are blessed with potential instruments for detecting exactly– for sort of making the travel to the horizon of a black hole that is promised in the Hollywood movies. That’s using gravitational waves. Where gravity turned into a wave, just the same way like electromagnetism is turned into light waves.

2:46Skip to 2 minutes and 46 seconds So I guess we are in a period where we’re going not just through the type of experiment where you have been playing an important role, but also in future experiments, both in cosmology and in gravitational waves. Where we can expect many new surprises in gravity. And we were fortunate to be living in a time where science is advancing, and giving us new tools, and letting us look at things. So come with us on this trip in the MOOC, learn about gravity, learn about all the various aspects of gravity. The stuff that’s fundamental and well-understood, and the stuff that we hope to uncover in the future.

In this video Pierre Binétruy and George Smoot introduce you to the course (3:31 minutes).

You can comment on each step of the course by clicking on the pink + icon and the comments will be revealed.

When you reach the end of a step and have understood everything, click the pink Mark as complete button at the bottom. This will update your progress page, and will help you to keep track of which steps you’ve done. Any steps you’ve completed will turn blue on your To Do list.

If you want a record of your course, you can buy a Certificate of Achievement from FutureLearn.

The Certificate of Achievement is a great way to prove what you have learned on the course and as evidence of your Continuing Professional Development (where appropriate). This is a personalised certificate and transcript, detailing the learning outcomes from the course. It comes as a printed certificate as well as a digital version which you can add to your LinkedIn profile. To qualify, you must have marked at least 90% of the steps in the course complete, have attempted all test questions and achieved a 70% or above score across all tests in the course. 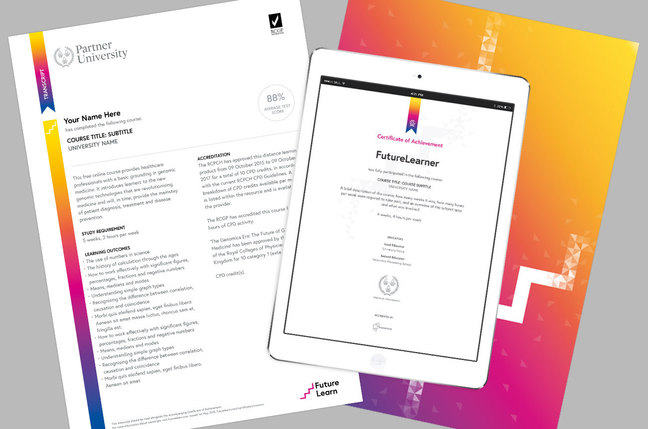 There is also the option to purchase a personalised Statement of Participation, to celebrate taking part. To be eligible for the Statement of Participation, you must mark at least 50% of the steps on the course as complete and attempted every test question. This also comes in a printed and digital format and you can add it to your LinkedIn profile.

Galileo and the falling bodies

Learn what it takes to become a vet and explore the challenges of the vet profession to decide if it's the right career for you.