0:08Skip to 0 minutes and 8 secondsThe Romans were in Britain for a long time. The army arrived under the emperor Claudius in AD 43, and we conventionally speak of formal Roman administration coming to an end around AD 410. That is 367 years. Now, I don’t need to tell you that a lot can happen in 367 years. It’s worth thinking briefly about how society has changed in your own country in the equivalent period. Here, in England, that would in terms of historical events, that would take us back to the execution of Charles I, to the time of Oliver Cromwell, to a time of Civil War. But life itself isn’t just about the big events, it is of course about the personal, the everyday.

0:51Skip to 0 minutes and 51 secondsThere is huge scope for change in beliefs, language, dress, diet, many other things over such a long period. And indeed, radical change can take place in a much shorter period too – consider again for a moment changes over the last fifty years in your country. Of course, there will be continuities too, but the dangers in simply generalising about the things of everyday life over such an extended period are everywhere apparent. One obvious change has resulted from the information revolution. This spectacular transformation seems to have shrunk the world, and for many of us changed the nature of time and work.

1:30Skip to 1 minute and 30 secondsIt is worth remembering that Britain underwent an information revolution during the Roman period – new transport networks, new technologies of information exchange – the introduction of writing for example, new communications systems, a new lingua franca (Latin) and new methods of transferring value (coinage, thought used in small areas of south east Britain before the conquest, becomes widespread later). So our message here, alongside that of Hadrian’s Wall as an enduring element of the frontier landscape, is that society is changing – the Roman period is dynamic – and our analysis of the evidence has to take this into account.

To appreciate the Wall and the people who lived in its shadow, we should place them in time.

The diagram below offers a simple timeline of major events in the history of Roman Britain. It begins with the Claudian invasion in AD 43, includes the beginning of building work on Hadrian’s Wall (AD 122) and ends with the collapse of Roman central authority here c. AD 410. 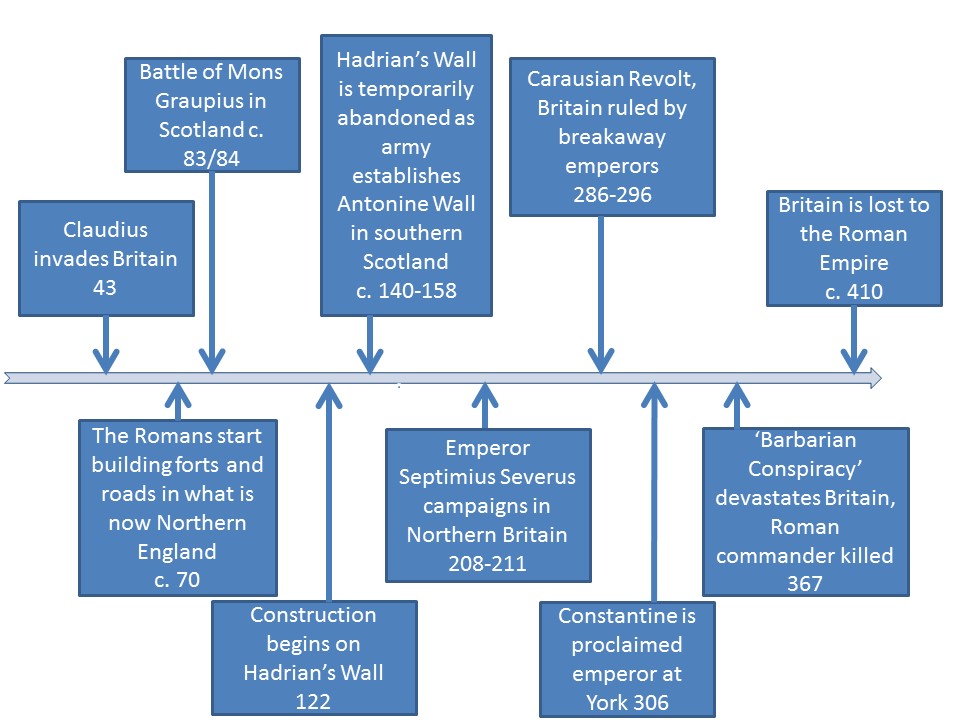 If you would like to examine a detailed history of the construction of the wall please see the ‘Downloads’ section at the bottom of this page.