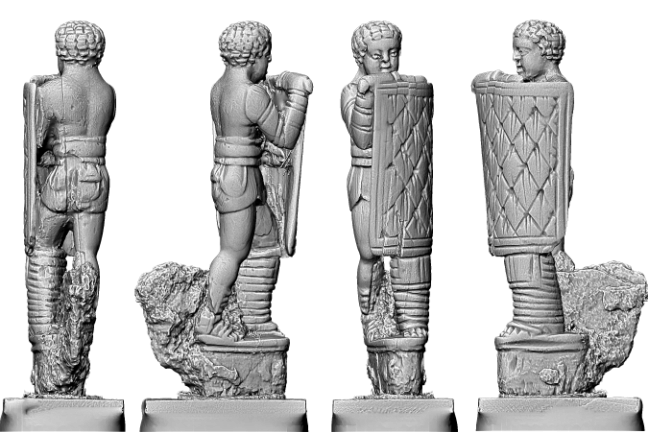 The gladiator knife handle from South Shields, carved from ivory

Small Finds: Function, Use, and Analysis

The archaeology of Hadrian’s Wall and its soldiers will conjure images of weapons and armour, but these military-type objects are but one small component of the entire package of material culture – including small finds – that are associated with the Roman frontier. Despite their often humble size, small finds are vitally important to the archaeologist; these objects reveal vital information about life in the past, including aspects of technology and production, economy, identity, and religious practice and belief.

Archaeologists use the term small finds for those objects that are not environmental evidence (for example pollen samples) or bulk finds (for example pottery, which is often found in very large quantities on Roman sites).

Small finds can present intriguing challenges. Take the example of the gladiator knife handle, pictured above. When you first saw the image, were you able to identify what the object was? The gladiator is an obvious aspect of the object, but this is only the decoration, and does not reveal the actual function or identification of the object. The significant clue is found at the object’s base. There is an axle passing through the base, and there is a sub-rectangular ‘lumpy’ bit of metal (iron) that emerges from between the gladiator’s feet. This reveals that the object is a folding knife, for which only the base of the iron knife blade remains along with the finely carved ivory handle.

But how should we understand this object? It is a folding knife, and therefore not an example of the classic military knife, the pugio. Should the object still be thought of as a weapon? Or is it a tool? Or was it used for something else? Was it even used at all?

A pioneer in the field of small finds studies, Nina Crummy, grouped artefacts into 18 functional categories in her 1983 publication on the small finds recovered in excavations at Colchester.

The following list will be a useful reference, but remember that some categories can be open to interpretation and some objects could reasonably be attributed to more than one category. Also, whilst some objects may appear familiar, having changed little over the centuries, others are quite culturally specific and therefore appear rather alien to modern viewers with no experience of them.

In the quiz that follows, you will be encouraged to apply these categories to a selection of small finds. The 18 categories established by Crummy are:

Detailed work on Roman small finds is an important field of expertise at Newcastle. If you want to learn more about this subject we would strongly recommend a book by the former Director of Newcastle University’s Centre for Interdisciplinary Artefact Studies:

If you have an interest in small finds, we would recommend the excellent database developed by the Portable Antiquities Scheme (PAS), which can be searched in simple and more advanced terms. You may find it useful to think about the Crummy classification in relation to some of the finds catalogued on the PAS database.

Now try using the Crummy classification yourself in the next step.

We have put a link to the full text of Crummy’s classification and report in the “See Also” section.