This content is taken from the Newcastle University's online course, Hadrian's Wall: Life on the Roman Frontier. Join the course to learn more.
View course
2.14 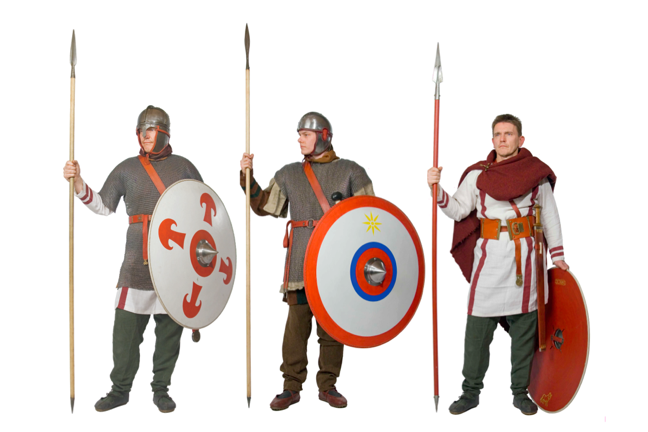 The organisation of the Roman Army under the late Empire

Every campaign exposed Roman generals and soldiers to new weapons and equipment, tactics and enemies, and these experiences inspired further evolution of the Roman armies through the 3rd and 4th centuries.

The late Roman army was a different organization than in previous centuries – one could even say it became more professional. It changed through the course of the third century, and Diocletian, Constantine, Valentinian and the other soldier-emperors of the fourth century initiated a series of changes to the organization of the Roman Empire and its armies. Four aspects are particularly important and highlight how the late Roman army was different from the army that built Hadrian’s Wall:

These changes teased apart the different roles of imperial officials, meaning that the military had a clear chain of command and dedicated support from different government departments. The hierarchy of the army can be seen in the hierarchy chart below.

Diagram illustrating the hierarchical representation of the command structure 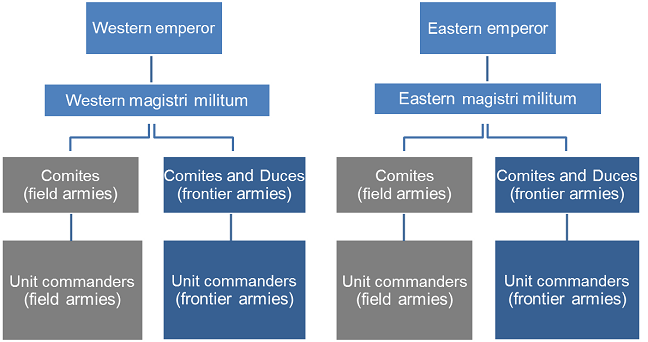 The limitanei, soldiers of the frontier armies, lived in forts located along the frontiers of the Roman Empire. The comitatenses, soldiers in the field armies, were garrisoned in cities when not actively campaigning.

By the 4th and 5th centuries, approximately only 25% of a soldier’s pay came as cash. The remaining 75% of pay was in kind, in the form of his food (and fodder for cavalry horses), weapons and armour, and uniform (including boots). The exact amount of salary paid in cash and in kind varied depending on local and regional conditions across the Empire, and commonly soldiers were not paid for many years at a time.

Scholars have estimated the size of the late Roman army in the area of 400,000-600,000 men in paper strength, based on very limited surviving records. This is approximately double the size of the army during the early Roman Empire.

While the army as a whole was larger, the organization had changed and individual units were smaller than in previous centuries. For example, cohorts may have only consisted of 150-200 men, and legions may have been reduced in strength to 1,000 or 3,000 men.

In addition to the split between field and frontier forces, units were given new names, and the military terminology in late Roman sources is less precise than in earlier periods. So while the legions, cohorts, and alae of the early Empire survive, there are also new units called vexillations, numeri, limites, and milites. Barbarian units, foederati, served in both the field and frontier armies, sometimes under their own chieftain, sometimes under a Roman commander.

Around 60-75% of the army was composed of the limitanei, who were positioned along the frontiers. These were the soldiers that would have garrisoned Hadrian’s Wall in the fourth century. Their job would have been to police and defend the frontier, patrolling their assigned areas and keeping the Wall and its installations in good repair.