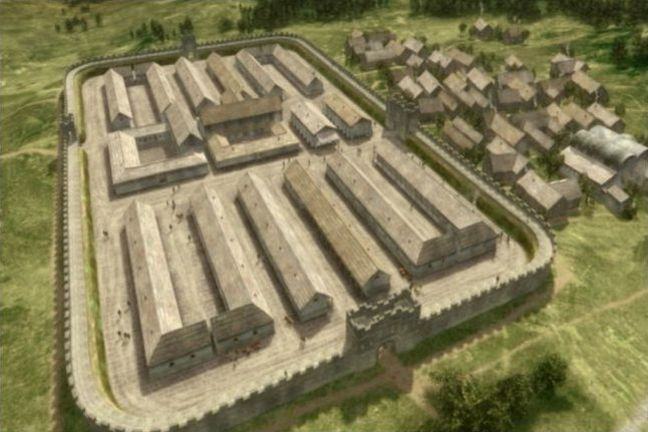 What was it like to actually live near a Roman fort?

Having looked at the challenge of reconstructing ancient landscapes, we can now focus on the military settlements that characterised the frontier.

Largely because they are so conspicuous and responsive to archaeological investigation, the buildings established by the Roman army in the frontier zone are the most studied. Forts are a particular draw for scholars, and though there is still much to learn (only 21% of the most examined fort, Birdoswald, has been excavated to current standards), we do have a good sense of the elements and attributes they would have had in the second and third centuries AD.

Yet there is a remarkable amount that we don’t know about the areas around the forts, let alone the way people used these areas. In the next steps we will look at some of the different elements of wider settlements, at the extra-mural spaces and the cemeteries. For the moment, let us take a broad overview of how and where the army and those closely associated with it operated in the larger landscape. 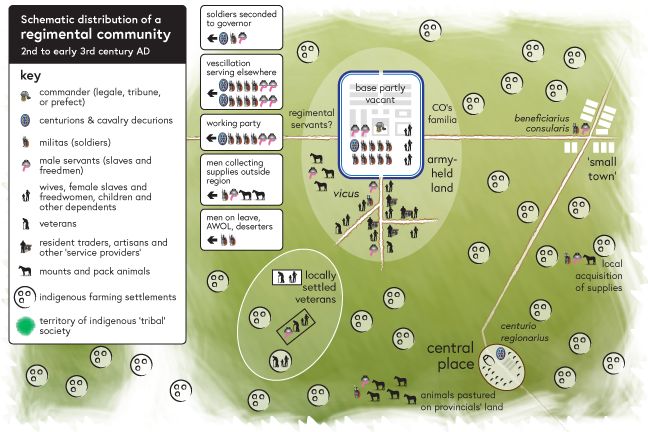 After Simon James, from James and Millett Britons and Romans (2001)

Larger version of the diagram

Take a look at the schematic redrawn from an original illustration by Simon James. You may recall from Week 1 that Simon suggested we need to look at military installations not simply as places where soldiers were based but also as ‘wolf cages’; complexes designed to ensure that their occupants were controlled. This image takes a ‘regimental community’, for example any one of the cohorts or alae on Hadrian’s Wall, and gives us a sense of the range of activities they might have engaged in and, therefore, the way that they might be dispersed across the landscape.

Taking the plan as your starting point, consider what challenges this pattern of working would have presented for the unit commander.

Now consider the perspective of those who were somehow dependent on the soldiers. For example, imagine you were a member of a soldier’s family.

Add your thoughts to the comments.