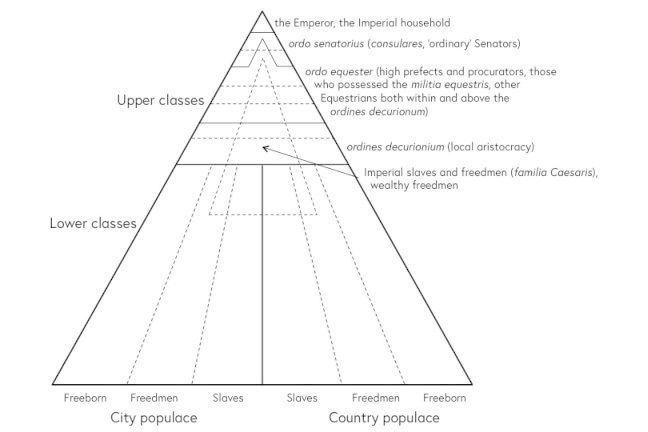 From senators to slaves: social status in frontier society

For the Romans, High Rochester in Northumberland was a very remote place indeed, an outpost fort that lay miles north of Hadrian’s Wall.

Yet even here the complexity of Roman society, with its myriad ranks and statuses, would have been much in evidence.

Highest born in the community here was Lucilla, described in an inscription as a clarissima femina, i.e. a woman from the senatorial class (RIB 1288). Lucilla would have grown up surrounded by senators, the class from which the emperor’s senior officials and provincial governors were drawn. Yet under Roman law on her marriage she would have had little choice but to follow her husband to this remote outpost of empire, even though he was of a lower social class. For as her husband and the father of her children, he was the pater familiaris, the one with the power of life and death over his household.

Lucilla’s husband was Rufinus, the tribune who commanded the High Rochester garrison. He was of the equestrian class, one of the ‘knights’, the social group ranked below the senatorial class in Rome’s hierarchy. These were still individuals of wealth and influence. The emperor recruited many officials from amongst their number, and almost all the units stationed on the Wall were commanded by men of his class.

Evidence that Rufinus’ power and influence was not limited to his role as husband and regimental commander comes from a second inscription from the site (RIB 1271). Roman society was bound together by the patronage network. The powerful served as patrons to the less powerful, their ‘clients’, who in turn sought to support their patrons through the performance of a range of tasks. RIB 1271 is an altar to the god Silvanus, dedicated by Eutychus, a freedman (i.e. a former slave) and his dependants, for the welfare of Rufinus and Lucilla. Eutychus is the client, Rufinus the patron, a fact that enables him not only to expect much of Eutychus as a dependant, but also, when required, Eutychus’ own dependants. This could have carried significant benefits, for though Eutychus had begun life as a slave, he had risen in the Roman world, wealthy enough to sponsor an altar and to have individuals who in their turn were bound to him.

And so we see, even here in a remote frontier settlement of no more than three thousand souls, a network that takes us through power and influence from the ancient aristocracy of the Roman senate, to the world of former slave. Power, influence, birth, status and gender all combined here, as they did across the broad social structure of the empire, to form a hierarchy with one man at the top, the emperor.