0:13Skip to 0 minutes and 13 seconds So here we are inside Senhouse Roman Museum, and I’m standing in front of a grayscale magnetometry plot of the fort area and the extramural settlement.

0:26Skip to 0 minutes and 26 seconds Our work in the Roman temples project actually involves discoveries initially made here in the 1870s, the discovery of the largest group of altars ever to be recovered from Roman Britain. And further in towards the fort, 100 metres further into the fort, in this area here, where we’ve demonstrated that we have a rectangular temple. The northwesternmost classical temple to be discovered so far in the Roman Empire. And adjacent to it, a circular structure, a mausoleum or another temple perhaps. One of the things we’re going to establish this year. Now, we’re not just about finding temples and monumental structures. Work here at Maryport is about understanding the dynamics of the whole settlement and how these things work together.

1:17Skip to 1 minute and 17 seconds So we’re interested in also the less-obvious, the less-dramatic features around the temple buildings. In particular, these anomalies that show up on the grayscale plot. They may represent some kind of ditches that defined the religious or cult area as a distinct zone from the main settled area, which you can see here running back of this road, with houses and plots on either side of it. So we are interested through the Roman temples project in understanding, actually, the detail of religious space. How that space changes. And also what we want to see is some evidence for how religious action and worship was actually taking place here on the fringes of the Roman Empire.

2:29Skip to 2 minutes and 29 seconds All this fits within a much, much larger landscape. So further down towards the coast, we’re looking across what would’ve been the extent or a large area of the extramural settlement, where many of those associated with the military unit would actually have been living. So there’s archaeology all the way out over there. And if we look right behind me, you can actually see the area we were excavating from 2011 onwards, where the altars were originally discovered. So it’s connecting different parts of this landscape, really, in order to understand the story of Roman Maryport and the way in which its people connected with the gods. What you can see here behind me is this fascinating circular structure.

3:16Skip to 3 minutes and 16 seconds You can see the foundations of that. That’s one of our main tasks this season, working out what that is. You can also see the southern end of the rectangular temple. We haven’t opened it all this season because we had much of it out last year. So we’ve got the southern end of it. Other areas that are of importance to us are the boundary spaces. Now where John is working there, he’s taken a section through the ditch, and that ditch may well be serving to actually encompass the temples area.

3:53Skip to 3 minutes and 53 seconds An essential part of any archaeological project is a rigorous approach to recording features on site, but also to ensuring that finds and material that come up from site can be related to the context in which they were originally discovered. So once they have been excavated, they are recorded, registered, and sent for, if you like, first aid. There are, of course, many different types of evidence that we need to record from an excavation. Always keeping very carefully in mind the context or finds’ deposition. And we pay special attention to environmental evidence. Our other big challenge, as I mentioned earlier, is the need to actually understand the way in which people were worshipping.

4:49Skip to 4 minutes and 49 seconds So we’re not just saying, we found these buildings, but we’re understanding how it is the people are performing rituals on this site. And we’re also already seeing some very interesting clues to that. So another source of evidence for what’s going on on the site takes the form of animal bone remains. In this case, we’ve got burnt animal bone. And the majority of it is sheep goat. And we’ve got within this these very distinctive elements, the phalanges here, of a sheep. But there’s also alongside that a rather different animal represented, as this vertebra demonstrates. And here we’re looking at a bird vertebra. So we’ve got a mixed sacrifice here on the site.

5:34Skip to 5 minutes and 34 seconds And I think its location underneath the temple indicates we’re looking at the sacrificial offering that accompanies the consecration of land for the construction of a new religious building.

What can modern excavation tell us about ritual and religion in the Wall zone?

This is a key question for the Roman Temples Project team led by Ian and his co-director Tony Wilmott at Maryport in Cumbria. Maryport is world famous in Roman studies for the remarkable series of altars dedicated to Jupiter that have been unearthed at the site (and now on display in the Senhouse Museum). Most of these were discovered in 1870, but Ian and Tony’s team found another at the same location in their 2012 season. A dedication slab (RIB 832) from the site indicates that a Temple to Capitoline Jupiter stood nearby. The Project, funded by the Senhouse Museum Trust and Newcastle University on land owned by Hadrian’s Wall Trust, is now examining the temples area where some of these altars may once have stood in an attempt to better understand the ritual practices of the frontier community. 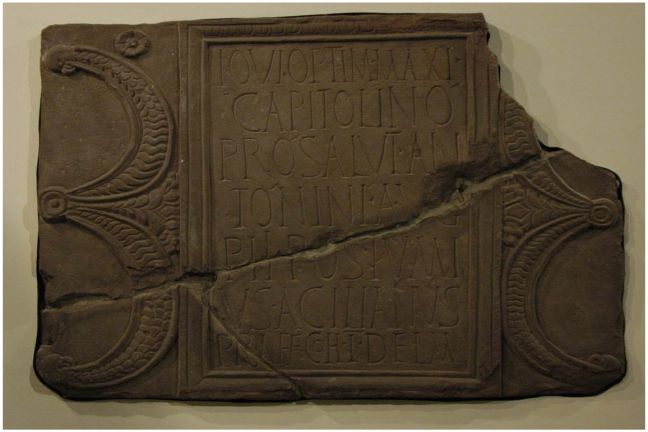 In the last step we asked you to think about some of the ways in which you might go about investigating a site with possible cult associations and we provided you with antiquarian plans from Maryport.

In this video we offer a glimpse of the Roman Temples Project at the beginning of Ian and Tony’s fourth season of excavation there. They too studied the antiquarian plans and reports before setting out a long-term plan of investigation.

In this video you will see how the team: