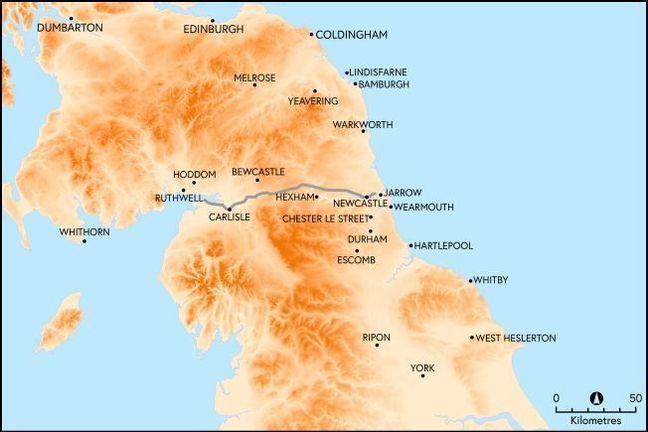 Map showing the settlements around Northumbria

While there is fragmentary evidence for activity along the Wall in the 5th and 6th centuries, it is difficult to provide a clear narrative for what happened in the aftermath of the Roman Empire.

During the 5th and 6th centuries, the eastern parts of Britain were colonised by people from northern Europe, whom we call the Anglo-Saxons today. The archaeological record suggests that this settlement was greater in the south of England than in the north, but the first traces of Anglo-Saxon material culture can be found in Yorkshire in the mid-later 5th century.

Larger version of map of Northumbria

In the 5th and 6th centuries, there were a number of small kingdoms that emerged in the frontier zone of Britain. We know the names of a few of these, though many remain lost to time. In the area that corresponds to modern Yorkshire was the kingdom of Deira; in the area of the modern county of Northumberland was Bernicia; and in the area of the modern county of Cumbria was Rheged. Eventually, these were all to become part of the kingdom of Northumbria.

There is a tradition recorded that in AD 547, the English ‘king’ Ida captured Bamburgh, and the kings of Bernicia trace their dynasty to Ida. According to the Venerable Bede, writing in the 8th century, it was Aethelfrith, Ida’s grandson, who brought the greatest expansion to Bernicia. It has been argued by the historian Ian Wood that Bernicia may have been centred on the River Tyne and the eastern end of Hadrian’s Wall.

After a number of battles in the 6th century, Bernicia and Deira were joined to form the kingdom of Northumbria. The combined strength of Northumbria made it a powerhouse, and the kingdom expanded to rule the entirety of middle Britain, an area that generally corresponds with the frontier zone of Roman Britain, centred on Hadrian’s Wall.

There are indications that Hadrian’s Wall continued to play a role in the 6th and 7th centuries. For example Oswald (King of Northumbria from 634-641/2) used Hadrian’s Wall as a protective flank for his army encampment on the eve of the Battle of Heavenfield near Chesters fort around AD 635.

Northumbria was perhaps the most powerful and successful of the early kingdoms to emerge in post-Roman Britain. It produced great works of art, such as the Lindisfarne Gospels, and the wealthy monastic foundations sponsored by Northumbria’s kings produced the finest scholars in Europe. Bede was a monk of the twin monasteries of Monkwearmouth and Jarrow, and is largely responsible for the use of the BC/AD system of dating in the West, among many other accomplishments. Alcuin of York was head-hunted by Charlemagne to be the leading scholar of the Carolingian court in the later 8th century.

Eventually, Northumbria was surpassed in power and influence by the kingdoms of Mercia and Wessex, as well as suffering from Viking invasions in the later 9th and 10th centuries.

However, recent research has proposed that the success of Northumbria was largely due to the stability and martial tradition that Hadrian’s Wall and the frontier zone of northern Britain provided to succeeding kings of post-Roman Britain.