This content is taken from the Trinity College Dublin & EIT Health's online course, Improving Health Assessments for People with an Intellectual Disability. Join the course to learn more.
View course
1.7

0:05Skip to 0 minutes and 5 seconds In an earlier video, we established that we now have a growing population of older adults with an intellectual disability, in better health, who are living longer. Despite this increased life expectancy, significant health disparities remain. And the age of death is considerably lower than the general population. Today, we are going to explore the health conditions experienced by people with an intellectual disability. We will examine the differences and similarities when compared to the general population. The World Health Organisation has emphasised that, because of the compelling needs associated with ageing, and intellectual disability, special attention needs to be given to this segment of the world’s growing older population.

4:43Skip to 4 minutes and 43 seconds But what is striking is that the levels of multiple morbidity, among the younger cohort of people with intellectual disability, age 40 to 49, is the equivalent to the levels seen in older age cohort, those over 75 years in the general population. So in all, you can begin to see that those with an intellectual disability do have different challenges. And these health challenges are different to older adults in the general population. These challenges can compromise independent living and impact on overall health and well-being. For health care providers, this presents unique challenges which we will be exploring in this course. One of these challenges is engaging people with intellectual disability, and health promotion, and health screening.

6:39Skip to 6 minutes and 39 seconds An issue that ought to be a goal for health care providers to ensure quality of health care for all. So what do we need to do as we move towards the future? As governments and local groups plan to accommodate a growing number of older and ageing adults, it is important to include adults with intellectual disability in these health care arrangements.

Similarities and differences in health conditions

As we have explored in the video, people with an intellectual disability have differences in their health conditions compared to the general population. 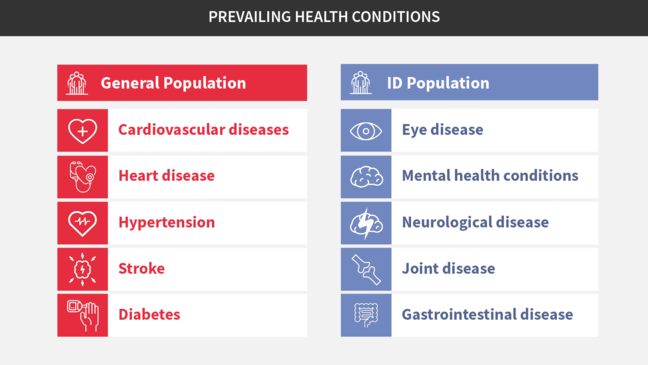 Thinking about these differences:

Learn how postnatal depression affects parental mental health and how to provide support on this BPS-approved course.