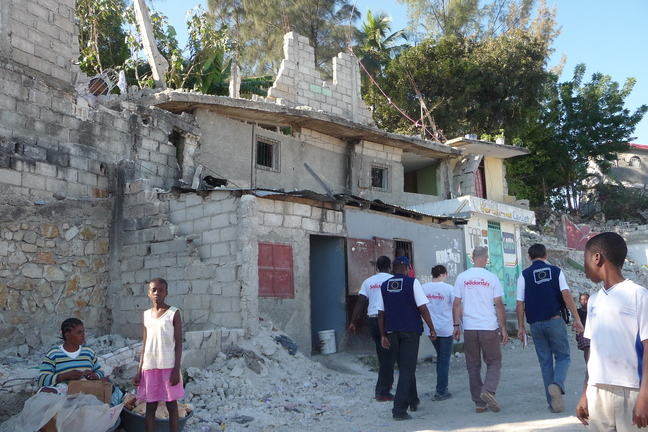 Destruction from the 2010 Haiti earthquake.

It may be human nature to want to help those in need in times of crisis, but what happens when an intervention goes wrong and does more harm than good?

The benefit of understanding why interventions go badly

Continuing and protracted conflicts and an increasing number of natural disasters globally have resulted in 65 million forcibly displaced people across the world, including 21 million refugees1. At the same time, the number of humanitarian actors continues to increase. In 2010, there were an estimated 4,400 non-governmental organisations (NGOs) and 274,000 aid workers responding to the needs of conflict- and disaster-affected people2. However, throughout history, many humanitarian responses have failed to have an effect, been significantly delayed, or even been harmful to local populations. It is therefore essential to understand and use these lessons to improve responses in a routine and continuous way so that we can avoid and reduce injury, illness, and death among people in crisis.

In spite of the billions of dollars in relief funding raised and the participation of hundreds of humanitarian actors in the wake of the Haiti Earthquake, the response is largely viewed as a failure by the humanitarian sector.

A report from 20133 describes how very shortly after the earthquake occurred there was a shift from emergency relief efforts to a longer term, ‘build back better’ response, focusing on rebuilding the country and strengthening government capacity. However, three years later construction on several high profile projects, including two hospitals, had yet to begin. Many Haitians displaced from their homes by the earthquake were still living under tarps or tents provided in the immediate aftermath of the disaster. The idea of ‘build back better’ had become a slogan without any tangible actions attached.

The lack of health systems infrastructure, combined with low quality shelters and inadequate access to water and sanitation facilities ultimately aided in the rapid spread of cholera in October 2010. The health cluster, led by the WHO, was unprepared to meet the needs of those struck by cholera, and during the initial outbreak failed to mobilise approximately 600 separate humanitarian actors into any form of coherent response. In the first three months of the epidemic, nearly 80% of cholera patients were treated by organisations outside of the health cluster, namely Médecins Sans Frontières (MSF) and the Cuban medical brigades. Within three months the epidemic had caused 209,034 cases and 4,030 deaths3.

The actors involved lacked experience and capacity in dealing with a cholera outbreak. When they did respond, the cluster decided to back the Haitian Ministry of Health and provide training and capacity building on cholera detection and treatment. While in theory this may have been a good decision, a huge gap in water, sanitation, and hygiene provision allowed bacteria to spread quickly and cause many unnecessary deaths4.

Furthermore, although it is now recognised that Nepalese UN forces introduced the cholera bacterium into Haiti, at the time the UN denied its involvement and was hesitant to investigate. These factors, combined with a focus on urban, rather than rural health interventions, where cholera is known to spread more rapidly, facilitated the largest cholera epidemic globally and resulted in over 7,000 preventable deaths5.

It is difficult to determine the lessons learned from these unsuccessful interventions as there were failures at many different levels. The initial response to the earthquake was slow and inadequate, and organisations failed to achieve their ‘build back better’ goal.

Furthermore, not only was the subsequent cholera outbreak caused by a member of the humanitarian system, but the system also failed to predict and prepare for an outbreak, a common occurrence when there is poor access to hygiene and sanitation facilities. Today, in the wake of Hurricane Matthew, Haiti faces yet another cholera outbreak due to further damage to infrastructure and water and sanitation systems. We have yet to see whether lessons from the past will be used as part of response efforts.

Afghanistan in the 2000s

In October 2001 the War on Terror began in Afghanistan, with US forces invading the country in order to depose the Taliban regime and apprehend key al-Qaeda operatives such as Osama bin Laden. However, the US Government sought to justify the invasion using humanitarian objectives, with President Bush declaring that:

“the oppressed people of Afghanistan will know the generosity of America and its allies. As we will strike military targets, we will also drop food, medicine, and supplies to the starving and suffering men and women and children of Afghanistan”.6

This statement to the Afghan people was followed by declarations from the US Administration describing humanitarian non-governmental organisations (NGOs) as “members of the combat team” that provided support to the Coalition Forces. As a result, humanitarian NGOs were no longer perceived as non-governmental and respectful of humanitarian principles, especially neutrality. Attacks on humanitarian convoy and staff dramatically increased, reaching a peak in 2008, when 40 kidnappings and 50 shootings of humanitarian employees were recorded.

Humanitarian organisations had tremendous difficulty covering all the regions and needs of the populations as access to populations was often difficult and had to be re-negotiated with local authorities7.

This case study demonstrates the clear benefit of drawing a line between humanitarian actors and the military, and to clarify to the military and politicians that humanitarian assistance is more than simply dropping food and blankets over villages. Humanitarian agencies are also a tool used to guarantee protection of civilians and can be used as a neutral actor to establish communication channels between warring parties. Notably, health professionals must establish trust with their patients in order to ensure use of health services and continuity of care.

For those of you who have worked in the development or humanitarian sector before, what are some of the key lessons you have learned?