Humanitarian crises are often large-scale and unpredictable and have the potential to cause serious injury, illness, and death. Planning and coordinating an effective response during a humanitarian crisis is highly complex and time-sensitive, as rapid and appropriate action is critical to reducing avoidable illness and death among crisis-affected populations.

What are the mechanisms for humanitarian response planning?

Crises often see multiple agencies intervening, both those with an established presence and those arriving specifically to respond to the emergency, sometimes with little or no local knowledge of the health system, security, or socio-political environment.

Organisations likely to be deployed in an emergency or in a country prone to health or humanitarian crises often plan by working through the most likely emergency scenarios to anticipate how the organisation will intervene and speed up their response time. Actors with a presence on the ground may have in place Emergency Preparedness & Response Plans (EPREP), which they develop based on assessment of the most likely emergency scenarios. Typically an EPREP outlines first response activities for each scenario, assessment of stockpiling of emergency supply needs and an outline of what human resources will be needed and where they will come from. EPREP plans can also be useful to familiarise teams and train them with potential scenarios to enable a more rapid response in the event of an emergency1.

In addition to envisioning the scenario of an intervention and supplies, National Emergency Preparedness Plans usually define the coordination mechanisms and links with other actors, including local non-governmental organisations (NGOs), UN agencies, and government. EPREPs are a building block of local and national response planning as they are more likely to trigger effective interventions quickly and efficiently, and often link in with the humanitarian clusters. 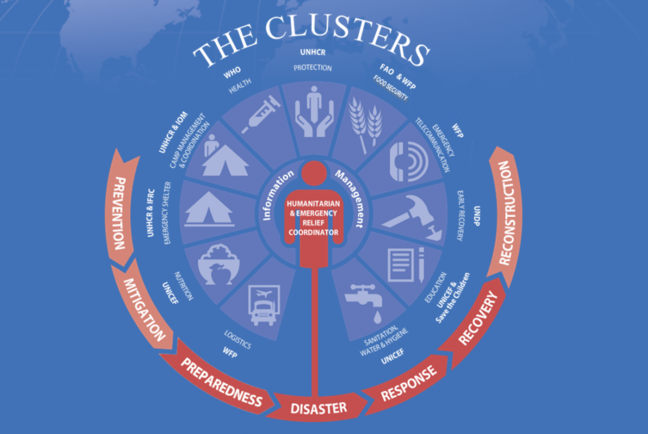 Established in 2005, the Cluster Approach is a national level humanitarian coordination mechanism (Figure 1). It is led by United Nations agencies acting as ‘cluster leads’ to direct the inter-agency response. The WHO leads on health, although all eleven clusters impact on health, particularly nutrition and sanitation, water, and hygiene, both of which are led by UNICEF2. Establishing a more streamlined approach to prioritising and response planning aims to ensure the right actor with the capability to undertake the right action rapidly results in a timely response, ultimately saving lives.

A preparedness and response initiative to address the Ebola outbreak in West Africa was implemented by BBC Media Action’s Lifeline Preparedness and Programming. The training equipped humanitarian, government, and media practitioners in affected and at-risk countries, with the knowledge, skills, and processes to meet the information and communication needs of people affected by the Ebola crisis. It differed from conventional news reporting because it was created for people affected by crisis, rather than to inform the general public about the crisis. It also gave affected people the opportunity to voice their needs, tell their stories, ask questions, and share solutions.

Additionally, lessons learned from the slow response to the Ebola outbreak in West Africa led to a global level response initiative. For example, the recently established UK Public Health Rapid Support Team has a fully operational specialist team that can be deployed anywhere in the world within 48 hours to tackle disease outbreaks that have the potential to develop into major health emergencies. This highlights the need for the international community to develop a system to help support countries respond to and control disease outbreaks before they can develop into a global threat.

How is information and evidence collected and used in response planning?

Information and evidence play a crucial role in response planning, though gathering and acting upon timely and accurate data is a key challenge, particularly in the first few hours and days of an acute onset crisis. The humanitarian community has developed more harmonised key health assessments with the objective of rapidly informing key priorities and decisions in response planning and implementation. Commonly used tools to determine health priorities include coordinated, harmonised, joint, multi-sectoral, and health sector assessments.

Health assessments aim to establish the magnitude and severity of a crisis to inform and guide the response. Data sources include existing health data (secondary sources) where available, in addition to information collected specifically on the event (primary sources). Assessments may span the initial hours of an acute onset crisis, largely comprising secondary data on the setting, including context information, such as the socio-political context and population and demographic profile, health data on key causes of mortality and morbidity, and the health system infrastructure. Multiple data sources are used to rapidly build an overall picture of the crisis to inform and design interventions. If done ‘successfully’ (although this should not be confused with ‘perfectly’), assessments should determine the impact of a response to reduce injury, illness and deaths.