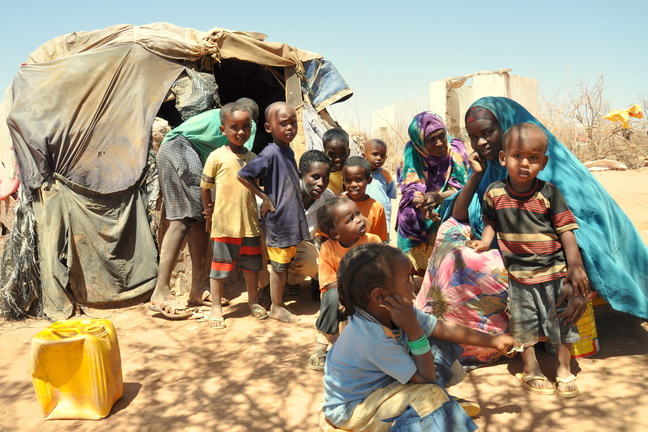 Mothers and children in IDP camp near Burao Town

The role of civil society: a case study from Somaliland

In post conflict Somaliland the role of civil society has increased, with an impact on community development, peace-building processes, and democratisation of the state. In particular, the increased participation of women and youth in Somaliland has been notable, with the creation of many Civil Society Organisations (CSOs) to advocate, coordinate, and network, including on issues that affect health, policy, and services. In this article, Musa Yousuf looks at the growing role of CSOs in times of crisis.

In humanitarian settings, there is increased recognition of the vital role of CSOs to ensure the voice of beneficiaries are heard and for interventions to be fit for purpose. CSOs are adept at identifying issues, facilitating access to groups1,2 (especially those who are marginalised), fostering dialogue with communities and ensuring meaningful voice, dignity, and participation in the communities’ future. In Somaliland CSOs are frequently involved and integrated into activities implemented by government and international actors, and in terms of governance and political participation are seen as an essential and credible voice of communities, adding value to decision-making processes.

However, the role of CSO engagement on health issues has yet to reach the visibility and influence it has in politics, although promising developments have seen CSOs entering partnerships to deliver health services and emergency response. This year the first meeting between the Somaliland Ministry of Health, international non-governmental organisations (NGOs), and local CSOs to coordinate the drought emergency response took place.

What resources and capacities can CSOs use to respond to a crisis?

Most local CSOs in Somaliland rely on donations from the Somali diaspora and/or international NGOs to fund and implement their objectives3. However, the ad hoc and short term nature of funding presents a challenge around the capacity, responsiveness, and sustainability of their reconstruction efforts, including health systems strengthening.

While CSOs demonstrate a willingness to be involved in rebuilding the health system, including emergency response to recurrent droughts, there is a lack of resources available to do this. CSOs are ideally placed to support emergency response given their proximity to and embedded links with the communities they serve, and with support and integration into emergency preparedness plans have the potential to be part of more effective responses and interventions1. Part of this integration would require development and maintenance of relationships with the national functional coordination structures, and would enable a larger role at the national level to shape and influence policy, resource, and response issues.

How can CSOs strengthen their response to future humanitarian crises?

Currently, there is no official CSO forum in Somaliland to develop strategy and coordinate relationship building with key stakeholders. While it is generally recognised that CSOs are an integral part of post-conflict reconstruction, health in Somaliland has yet to find a coordinated voice among CSOs. This limits the visibility and potential of the CSOs to meaningfully contribute to health systems strengthening, including emergency response. CSOs have much to contribute yet are constrained by challenges to access direct funding from donors, though a promising new model has emerged of funding a CSO though a sub-contract from the Ministry of Health , highlighting a willingness among donors and government to explore new approaches to health interventions in Somaliland.

Activities related to sensitive issues have particularly benefitted from collaboration with CSOs. Research conducted by the International Organization for Migration successfully accessed people living with HIV & AIDS, transactional sex workers, clients, and other ‘hidden groups’ in collaboration with CSOs including HIV & AIDS support groups, youth and women’s organisations. Partnership with CSOs was critical to accessing groups with highly stigmatised behaviours in a culturally and religiously conservative setting. As a result of the links with and trust in the CSOs, sex workers and their clients were successfully recruited to the study and the findings were integral to funding a further study. By enabling research among hidden and vulnerable populations, CSOs contributed to research which provided credible findings used in a successful US$60 million Global Fund application, in part to resource HIV & AIDS prevention and treatment programmes4.

A public health emergency due to chronic malnutrition has left 26% of Somali children classified as stunted and 15% as wasted5. During severe droughts the rate of malnourished people significantly increases, and children are particularly vulnerable.

SHiFAT CSO is currently managing the LasAnood and Erigavo Regional Hospital Stabilisation Centers located in the Sool and Sanaag, the most drought-affected regions. The programme began in August 2016, supported by the Ministry of Health and UNICEF, as part of emergency response in the projected droughts, and has enabled a rapid response to the effects of malnourishment among children. The approach highlights a potential blueprint for greater future inclusion and integration of CSOs in post-conflict strengthening of health systems and emergency response, in addition to partnerships between multiple stakeholders.

The Edna Adan Hospital opened in 2002 to provide maternity services in Somaliland, which has among the highest infant and maternal mortality rates globally. Funds were raised through personal assets, government, and private donors, as well as the community itself. Today the hospital provides services to reduce maternal, new-born, and child mortality, including antenatal and neonatal intensive care as well as paediatric and adult care. The hospital has made a significant contribution to building the health system workforce in Somaliland by developing and training nurses, midwives, and laboratory technicians.

Links with overseas organisations, including Kings College Hospital and the Tropical Health & Education Trust, ensure continued scholarships and staff training to build local capacity in Somaliland. The hospital continues to rely on a number of international donors for funding, medical supplies, complex surgeries, and capacity building initiatives, highlighting the continued and challenging journey toward sustainability6.

Teaching English: How to Plan a Great Lesson

Develop your English language teaching skills and learn how to plan and deliver effective English lessons with this online course.

Find out what you need to know about the IELTS Listening test and learn techniques to improve your test performance.